The global fingerprint access control market size was estimated at USD 2.84 billion in 2015. Increasing need for security requirements owing to the increasing threats of terrorist attacks is expected to contribute to the industry growth. Several government regulations mandate the implementation of identification technologies for citizens, employees, and foreign nationals to improve national security. Government organizations across the world are taking steps to improve security in response to intensified concerns from the threat of terrorism over public safety. National governments have mandated large spending on security measures, positioning emphasis on the technology to address mounting security concerns. Such initiatives are expected to favor market growth over the forecast period. 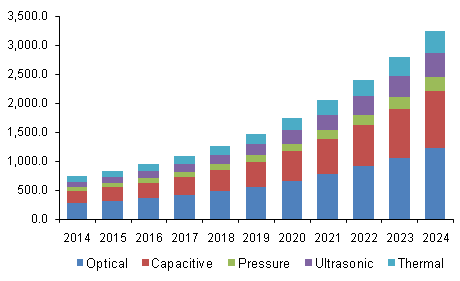 Cloud computing technology is the emerging trend that caters to the industry demand of a digitized economy. The technology offers several benefits such as on-demand environment, network-centric, agility, and data sovereignty. However, it offers certain security risks such as hacked passwords and data intrusion resulting in loss of personal information. Deploying biometric technology such as fingerprint address can resolve such issues by offering smart spaces, mobile applications and access control applications.

Increasing demand across the industries such as BFSI, consumer electronics and healthcare are projected to foster the industry growth. While conventional security methods such as password or credential have witnessed security vulnerabilities such as easy to forge or stolen, enterprises and governments in regions including Asia Pacific tends to switch to biometric identification systems due to high convenience and fortified level of security.

Optical fingerprint access control dominated the industry in 2015, however, capacitive products are anticipated to grow at significant growth rate over the forecast period. This can be largely attributed to the increase in development of electronic devices such as smartphones along with the rising demand for security. For instance, smartphone companies such as Samsung and Apple have started embedding capacitive fingerprint sensors into their smartphones. Furthermore, these products are economically viable as compared to the alternative products.

BFSI and consumer electronics to capture considerable share in the industry

Consumer electronics is expected to be the fastest segment, growing with a CAGR of over 18% from 2016 to 2024 owing to the increasing demand for access control features in smartphones and tablets. Mobile payment options such as PayPal, Apple Pay, and Alipay has already incorporated the technology. Moreover, manufacturers are offering the technology for mobile app developers, such as Samsung’s SDK Pass and Apple’s iOS 8.

BFSI is gaining traction with an overall CAGR of nearly 20% by 2024. It is deploying the technology for controlled access to meet the requirement for added security in the sector. The technology offers reliable and secure system for restricted areas without the need for traditional tokens or security cards. Moreover, it provides greater flexibility, maintaining high levels of security essential to the industry.

North America dominated the industry with the significant market share of over 34% in 2015. However, Asia Pacific is estimated to grow considerably with a CAGR of over 21% from 2016 to 2024 to capture the market share of over 28% in 2024. Technological proliferation backed by increasing need for secure authentication and recognition of individuals across distinct end-use industries are the factors expected to impel the regional growth. Moreover, declining prices of fingerprint access control systems and sensors has led to an overall increase in its global demand.

Furthermore, Middle East and Africa is expected to witness significant growth, which can be attributed to instability in regions such as Syria, Libya, Iran and Iraq that highlights the need for high degree of homeland security, surveillance and obtaining military intelligence. Increasing implementation of fingerprint access control devices for defense and military has led to the increasing adoption of the technology in the region.

3M Cogent and NEC Corporation are amongst the key share holders

Industry participants are increasingly focusing on joint ventures and strategic partnerships with consumer electronics manufacturers. Suppliers, manufacturers, distributors are collaborating to enhance and expand their product offerings, distribution channel and gaining market share. For example, recently in 2016, Synaptics Incorporated, which is the prominent developer of human interface solutions have announced to collaborate with TCL Communication to offer fingerprint sensor technology solution to its Alcatel smartphone customers in the U.S. and worldwide.

What are the factors driving the fingerprint access control systems market?

b. Key factors that are driving the market growth include increasing need for security requirements owing to the increasing threats of terrorist attacks.

How big is the fingerprint access control systems market?

b. The global fingerprint access control systems market size was estimated at USD 5.2 billion in 2019 and is expected to reach USD 6.1 billion in 2020.

What is the fingerprint access control systems market growth?

b. North America dominated the fingerprint access control systems market with a share of 32.6% in 2019. This is attributable to technological proliferation backed by an increasing need for secure authentication and recognition of individuals across distinct end-use industries.

Who are the key players in fingerprint access control systems market?