The global fire fighting chemicals market size was worth USD 2.10 billion in 2016. Growing safety concerns and favorable safety regulations are anticipated to positively drive the market over the forecast period.

Governmental bodies across the globe have laid down stringent safety regulations which are to be followed by residential & commercial buildings. These regulations have been stated in order to ensure the protection of life & property in case of an occurrence of fire. These regulations mandate the presence of safety equipment such as fire extinguishers, hoses, and reels in the building premises.

Fire fighting chemicals (FFCs) market by services in the U.S. was worth 3,495.3 kilotons in 2016 and is projected to experience steady growth over the next eight years. Increasing demand for suppression agents on account of rising infrastructure, favorable governmental regulations, and the presence of major players are anticipated to boost the regional market.

The construction industry across the globe is experiencing a steady growth on account of rising industrialization. The rise of highly developed infrastructure coupled with technological development has brought about high rising skyscrapers and digitization in almost every phase of life. These aspects are however prone to accidents; if a minor mishap occurs, it could lead to an explosion or a hazard.

Growing concerns regarding the environmental impacts associated with the residual waste of FFCs has urged regulatory bodies in various regions of North America and Europe to issue stringent guidelines regarding the usage of suppression agents and the disposal of the waste generated by them.

Wet chemicals consist of potassium citrate, potassium carbonate, and potassium acetate. These agents along with water when spread over a combustion zone, form a foam blanket. This foam blanket reacts with the elements in fire and thus extinguishes it.

The various forms of dry powder consisting of sodium chloride, copper-based, graphite-based, and sodium carbonate-based. The crystals in these powders form an oxygen-excluding blanket by melting over the metal. These powders dissipate heat, by forming a heat sink by means of smothering. These varied advantages of the dry powder chemical type have are anticipated to contribute to the high segment share.

Halons help to eliminate the heat from combustion by displacing oxygen and thus helps to extinguish it. Halons are gaseous agents that prevent or hinder the chemical reactions in the combustion. The use of halons, however, has reduced on account of its effect on the atmosphere. Halons actively contribute to ozone depletion thus affecting the atmospheric lifetime.

Sodium chloride was one of the first chemicals which was utilized in an extinguisher. It consists of crystalline salts that help break the reaction between free radicals of fuel and oxygen by melting over the combustion zone. It is often used in addition to nylon which allows it to quickly form an extinguishing crust over the burning area.

The global demand for FFCs is increasing on account of the increasing number of favorable safety regulations. In terms of volume, portable fire extinguishers emerged as the largest application segment and accounted for over 31.1% of the total market revenue in 2016. 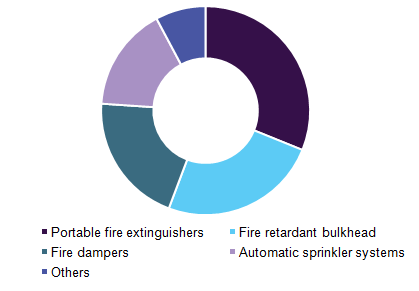 Portable extinguishers are provided in machinery spaces, decks, and accommodation spaces. They are widely utilized in commercial & residential buildings, construction sites, aircraft, hospitals, schools, and theaters. They are extremely easy to use and are usually located in an easily accessible location. Modern automobiles, ships, and heavy-duty construction vehicles are also equipped with a portable extinguisher.

Automatic sprinkler systems are usually located in the ceiling of rooms or halls of offices, residential buildings, factories, hotel kitchens, and theaters. These systems are often attached to sensors, which detect the presence of smoke and heat in the vicinity. When activated these systems release a spray of extinguishing agents with water as an additive.

Fire retardant bulkhead is mostly utilized in ships. On the occurrence of an accident, the decks and bulkheads get affected. If these decks & bulkheads get compromised the ship might sink into the bottom of the ocean. These parts hence need to be provided with high resistance to withstand these occurrences of accidents & hazards.

Fire dampers are provided in the ventilation system of engine rooms, cargo holds, and server rooms, in order to cut the supply of oxygen in case of a hazard. The dampers are clearly marked with open & shut positions, to enable any person to operate it with ease. The others segment consists of inert gas systems, main piping & valves, fixed extinguishing system, and pumps. Main piping & valves are connected to the emergency pump, which helps to dissipate the chemicals in the incidence of a hazard. Fixed extinguishing systems usually consist of water, foam, and carbon dioxide. These fixed extinguishers are often fitted in different locations on ships.

The National Fire Protection Association (NFPA) is a 121 years old organization headquartered in Quincy, Massachusetts. This organization is an association of the North American countries, and it maintains, codes, standards, and copyrights, for adoption and usage of FFCs & protection equipment. NFPA also publishes articles for model building codes for suppression equipment used for dealing with hazardous incidences. NFPA in association with American National Standards Institute (ANSI) has made various codes & standards concerning suppression agents & equipment available to the public.

The governmental agencies in North America work under the regulatory authorities of fire-rescue, bureaus, companies, divisions, and protection districts. These departments are governed by non-profit organizations, county government, special-purpose district entities, and local & state government subsidiaries. There are various state and federal governments in the U.S. that operate & govern the working of sire departs in order for the protection of surrounding areas from hazards. The various state & federal governmental authorities for the protection of forest & wildlands include the United States Forest Service (USFS), New Jersey Forest Fire Service, and California Department of Forestry.

The fire suppression chemicals market in the European region has been saturated on account of the major players in the regions. Furthermore, the stringent regulations laid down by the European Union for the usage of suppression equipment has resulted in the shift of the manufacturing of the same in different regions. The European region on account of the present major market players & developed infrastructure is anticipated to bring about innovative suppression agents and expertise to the currently saturated industry, which is thus expected to boost the market growth in the near future.

The region of Asia Pacific is characterized by emerging economies including China, India, and South Korea. The shift of suppression agents manufacturing in these regions coupled with the rising demand for protective equipment is anticipated to propel the market growth in the region. In China, hazard protection agencies are often governed by provincial agencies. One such provincial agency is the General Fire Brigade of Guangdong. However, cities including Macau, Hong Kong, and Beijing have publicly run protection & safety services.

The fire suppression chemicals market in CSA is anticipated to witness steady growth over the forecast period on account of the increasing manufacturing of suppression agents in the region. In Brazil, the suppression agencies are a part of the military division. Each state in the country has a division of Military Firefighters Corps. Although the industry in Brazil and Chile, has been underfunded and neglected by its government. This has led to the rise of private suppression organizations that do not rely on the funds from government. These private organizations also have training schools for suppression purposes.

The construction industry in the MEA region has witnessed an exponential increase over the past decade. The countries including Saudi Arabia and UAE are characterized by a significant rise in tall buildings and developed infrastructure. These buildings and commercial spaces require safety equipment in case of emergencies. The countries in the MEA region often follow the codes & standards laid down by the NFPA. The suppression agents and equipment being used have to be registered with Civil Defense authority in the region. The rise in infrastructural investment, coupled with the increase in demand for protective equipment is anticipated to positively drive the suppression agents market growth over the next eight years.

FFCs market is anticipated to witness a steady growth rate owing to the increasing number of safety standards for buildings. The manufacturing of these agents is anticipated to shift in the regions of Central & South America (CSA) and Asia Pacific, on account of the availability of cheap labor. The favorable governmental initiatives in these regions are also expected to drive market growth over the forecast period. Governmental bodies in the CSA region have made it mandatory to have a suppression division as an integral part of the military.

NFPA and U.S. Environmental Protection Agency (EPA) have established protocols regarding the usage of FFCs and safety standards associated with the same. The Canadian Association of Petroleum Producers and National Oceanic and Atmospheric Administration have issued stringent guidelines for the disposal of waste chemicals in North America.

In addition, companies are extensively involved in R&D to develop suppressing agents that have less impact on the surrounding environment. The growing environmental, health, and safety concerns regarding the FFC residue are expected to restrain the market growth over the forecast period.

This report forecasts revenue and volume growth at global, regional & country levels and provides an analysis of the industry trends in each of the sub-segments from 2014 to 2025. For the purpose of this study, Grand View Research has segmented the global fire fighting chemicals market on the basis of type, chemicals, application, and region:

How big is the fire fighting chemicals market?

What is the fire fighting chemicals market growth?

b. Portable fire extinguishers dominated the fire fighting chemicals market with a share of 32.84% in 2019. This is attributable to increasing use of these extinguishers in commercial & residential buildings, construction site, aircraft, hospitals, schools, and theaters.

Who are the key players in fire fighting chemicals market?

What are the factors driving the fire fighting chemicals market?

b. Key factors that are driving the market growth increasing safety concerns and number of favorable fire safety regulations in line with them.