The global fire fighting foam market size was valued at USD 4.95 billion in 2021 and is anticipated to witness a compound annual growth rate (CAGR) of 3.6% from 2022 to 2030. Increasing fire incidents, including wildfires due to climate change, fuel-based fires, fires due to electrical failures, and various other factors, are expected to drive the industry over the forecast period. Fire fighting foam has witnessed a rise in demand from industries including oil & gas, automotive, chemical, aviation, marine, mining, and others. This foam is used for extinguishing fires based on fuel, wood, electrical fault, and various other factors. 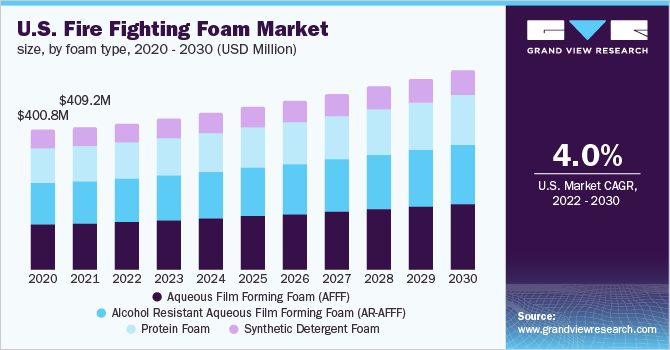 The rising popularity of firefighting foam due to its properties, such as higher expansion ratios, foam stability, resistance to higher temperatures, and efficiently disrupting the oxygen supply to suppress the fire, is anticipated to increase the demand for firefighting foam across the globe. As of 2021, the local fire department of the U.S. recorded almost 1.4 million fire cases, causing around 3,500 civilian demises and almost 15,200 civilian injuries. However, a slight decrease from the previous year of 3,704 civilian deaths. Furthermore, the U.S. has witnessed a rise in cases of wildfires, damaging an estimated 198,797 acres of land and 503 structures.

This increasing damage to life and the environment has propelled the demand for firefighting foam across the U.S. and is anticipated to follow a similar trend throughout the forecast period. However, the rising concerns over the use of toxic chemicals, such as Perfluorooctane Sulfonate (PFOS) and Perfluorooctanic Acid (PFOA), used for the manufacturing of fire fighting foam is anticipated to slow the market growth in the coming years. The PFAO tends to seep into the soil and groundwater supply and hence contaminating water bodies.

The Aqueous Film Forming Form (AFFF) segment dominated the global industry owing to its property of AFFF of instant form formation upon ejection of the concentrate or water mix from the nozzle. In the case of fuel-based fires, AFFF coats the pool of hydrocarbon fuel with a layer of foam, enabling a thermal barrier to inhibit and extinguish combustion. Furthermore, a major component for the AFFF-concentrate marks as water in a combination with other elements, such as glycol ethers and ethylene or propylene glycol, added to extend the foam life.

Alcohol-ResistantAFFF (AR-AFFF) is a fire suppressant consisting of fluoropolymers, fluorosurfactants, water-dissolvable polymers, and hydrocarbon surfactants. These foams are suitable for instant suppression of Class B fires, including polar solvent fuel fires, such as ketones and alcohols. AR-AFFF foams create a protective film between the foam blanket and the burning surface, further preventing the oxygen supply to the fuel and sealing the fuel surface hence hindering the release of fuel vapors. Protein-based firefighting foam is manufactured using naturally present hydrolyzed proteins in combination with foam stabilizers, corrosion inhibitors, bactericides, and other additives to deliver high heat stability, and enhanced burn-back resistance.

Based on fire types, the global industry has been further categorized into classes A, B, and C. The class A fire type segment dominated the global industry in 2021 and accounted for the maximum share of more than 40.85% of the overall revenue. Class A fires involve common combustible substances, such as fabric, wood, paper, and plastics. These accidental fires are common in various industries since these fires can intensify at a high rate in the presence of fuel abundance. Pressurized water along with mono ammonium phosphate is used to suppress Class A fires.

Class B fires involve combustible and flammable liquids, such as alcohol, gasoline, oil- paints, and lacquers. As a counterpart, Class A fires are suppressed using water, Class B fire is extremely dangerous as they possess fuel with lower density in comparison to water and burning grease has a higher temperature than the boiling point of water. On contact with water, the grease creates high-temperature steam, which expands rapidly and explodes, causing burns and spreading the fire uncontrollably. Hence, Class B fire extinguishers usually use dry chemicals, such as foam or powder.

The oil & gas segment dominated the global industry in 2021with a maximum share of more than 20.85% of the overall revenue. Highly flammable liquids and gases can lead to intense fire incidents, causing heavy property damage, pollution, and risk to human life. Oil-well fires result in the loss of millions of barrels of crude oil per day and can cause huge economic losses. Combined with the ecological difficulties caused by the large amounts of smoke and unburnt petroleum along with the enormous fuel supply, oil-well fires are highly difficult to extinguish than regular fires. Hence the product demand has increased in recent years from the oil & gas industry. 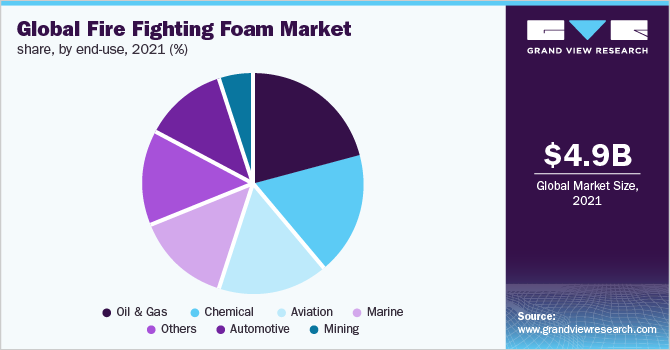 It is expected to follow a similar trend during the forecast period. Fire accidents involving chemicals are the second-largest segment after oil & gas. Dependence on chemicals is increasing for multiple uses, and many chemicals produced are hazardous and cause high damage and losses. For instance, in August 2020, an explosion caused by the storage of ammonium nitrate at Port of Beirut, Lebanon, resulted in 218 deaths, about 7,000 cases of injuries, and USD 15.0 billion worth of property damage. Hence the rising concerns about the usage of chemicals are expected to drive the product demand over the forecast period.

The Asia Pacific dominated the global industry in 2021 and accounted for the maximum share of more than 33.50% of the overall revenue. This is attributed to the rapid growth of industries, such as chemical, marine, automotive, aviation, and others, across economically emerging countries, such as China and India. The Asia Pacific accounts for a major share of the global chemical production and, fire accidents commonly occur due to of lack of proper industrial safety. In addition, dry weather conditions across various countries in the region are fueling fire accidents, resulting in endless wildfires, further causing damage to the environment, life, and economy. 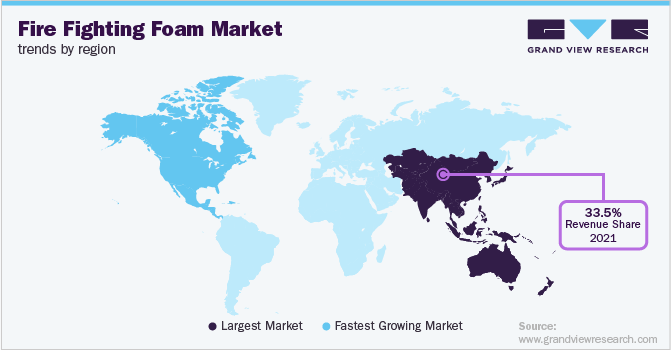 North America is the second-largest region, in terms of global consumption of the product, due to increasing demand from countries, such as the U.S and Mexico. Increasing fire-related accidents and wildfires in the U.S. and Mexico due to climatic changes and human negligence are anticipated to drive the regional market over the forecast period. For instance, in 2021, Mexico witnessed wildfires resulting in damage more than in the past decade. According to Mexico’s National Forestry Commission (CONAFOR), the country had 2,871 wildfires, which resulted in the burning of 73,459 hectares of land in the first three months of the year.

New product development and acquisitions are the major strategies adopted by the key manufacturers to encapsulate their industry presence. For instance, in April 2021, Johnson Controls introduced Chemguard 3×3, a non-fluorinated foam concentrate, which is expected to deliver effective and impulsive fire suppression of Class B hydrocarbon and polar solvent fuel fires. Some of the prominent companies in the global fire fighting foam market include:

This report forecasts revenue growth at global, regional, and country levels and provides an analysis of the latest industry trends in each of the sub-segments from 2019 to 2030. For this study, Grand View Research has segmented the global fire fighting foam market report based on foam type, fire type, end-use, and region: 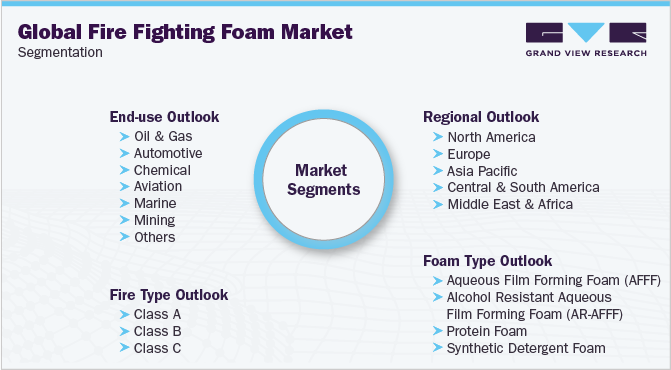 How big is the fire fighting foam market?

b. The global fire fighting foam market was estimated at USD 4.95 billion and is expected to reach USD 5.05 billion in 2022.

What is the fire fighting foam market growth?

b. The global fire fighting foam market is expected to witness a healthy growth rate of 3.6% from 2022 to 2030 and is anticipated to reach USD 6.73 billion by 2030. The rising popularity of fire fighting foam due to its properties such as higher expansion ratios, foam stability, resistance towards higher temperatures, and efficiently disrupting the oxygen supply to supress the fire, is anticipated to increase the demand for firefighting foam across the globe.

b. In 2021, oil & gas emerged as the largest end-use segment with a market share of 20.87% in 2021, on accounts of increasing damages due to highly flammable liquids and gases leading to intense fire incidents, causing heavy infrastructural damage.

Who are the key players in fire fighting foam market?

What are the factors driving the fire fighting foam market?

b. As of 2021, the local fire department of the U.S. recorded almost 1.4 million fire cases, causing around 3,500 civilian demises and almost 15,200 civilian injuries, However, a slight decrease from the previous year of 3,704 civilian deaths. Furthermore, the U.S. has witnessed rise in case of wildfires, damaging an estimated 198,797 acres of land and 503 structures. This increasing damage to life and environment has propelled the demand for firefighting foam across the U.S. and is anticipated to follow the similar trend throughout the forecast period.