The global fire trucks market size was estimated at USD 4.30 billion in 2015, growing at a CAGR of 6.3% over the forecast period. Increase in the demand for fire safety among developed countries and the need for advanced firefighting apparatus are expected to augment the market growth. Furthermore, growing standards with respect to safety across the globe are expected to aid the demand. 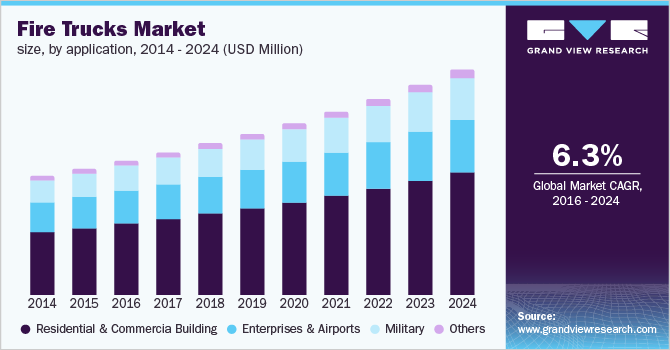 The primary function of a fire trucks includes transportation of firefighters to an incident scene to extinguish the fire with water or some chemical composition. In addition, government departments employ them for medical emergency services and rescue operations. Product innovation and technological advancements in the field of fire apparatus and related equipment have lowered the fatality rate in fire-related incidents.

Furthermore, the departments need to keep upgrading their equipment and apparatus owing to the constant technological advancement in the sector. As a result, constant amendments are made to the guidelines and regulations enforced by the associations such as the National Fire Protection Association (NFPA) in the U.S. and National Association of Fire Equipment in India.

Infrastructural development in the emerging countries has led the regulatory bodies to enforce stringent codes and standards to decrease infrastructural damage and loss which is expected to augment the industry growth. However, high preliminary costs and capital requirements for the manufacturing of trucks are expected to restrain the market growth over the forecast period.

The global increase in number of sales for fire trucks is attributed to the growing number of wildfires, fire incidents, and mishaps. In 2021 the U.S. witnessed around 8,619 wildfires that destroyed 2.6 million acres of land as well as close to 3,629 structures were damaged and destroyed while it also involved loss of human life.

One of the biggest markets for fire trucks is China due to the growing economy and rapid urbanization combined with strict codes and standards for the decrease in infrastructural damage and loss have created a need for fire trucks and emergency equipment. As China continues to build its civil aviation airport infrastructure the need for fire and safety equipment keeps rising. The country has built 43 airports between 2016 and 2020 and built close to 6 new airports in 2021 bringing the number of airports operating in the country to 247.

The high cost associated with procuring these machines combined with the high capital associated with daily operations and annual maintenance makes the product inaccessible for a lot of developing markets and thus reduces the market size. Fire trucks are built with high-quality components to ensure long-term durability in the field. Hoses, ladders, first-aid kits, self-contained breathing apparatus, ventilating equipment, and hydraulic rescue equipment are all included in these trucks. Although, these tools increase the expense of acquiring these trucks. The low rate of replacements has a negative impact on the growth of the fire truck market as the average lifespan of a fire truck is around 12 to 15 years.

Governments and private companies are supporting modern fireman trucks with multi-purpose equipment to increase their productivity. Airports and local governments are introducing new criteria for environment-friendly fire gear that reduce emissions, noise, and fuel use. Companies are introducing a new line of electric and hybrid trucks with more integrated features, such as Wi-Fi-connected aerial drones for accident scene surveillance and remote vehicle diagnostics.

The residential & commercial application accounted for the largest global market share and is expected to grow at a CAGR of 6.7% over the forecast period. The market growth for the product is anticipated to augment on account of the rising global population, which in turn will increase the demand for construction of residential and commercial buildings. 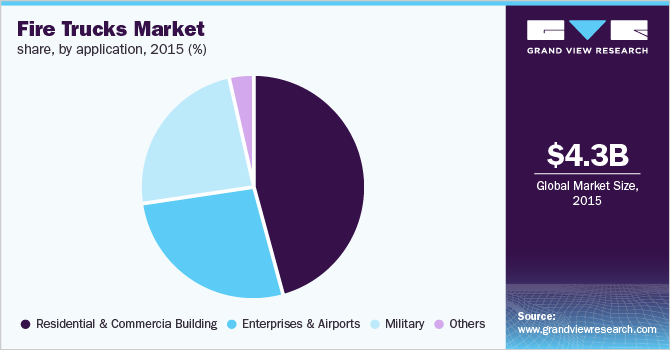 Growing application of Aircraft Rescue Fire Fighting (ARFF) vehicles for airport safety and rescue operations is expected to drive the market demand in enterprises and airports. Enterprises & airports segment accounted for over 26% of the total market share in terms of revenue in 2015. The application segment is anticipated to increase the market share owing to the growing number of airports and air passenger traffic.

Growing demand for advanced fire apparatus in developed countries such as the UK, France, and the U.S. is expected to augment the growth of the market in North America and Europe. Furthermore, the increasing building & construction activities coupled with low prices are expected to drive the market growth in China over the forecast period.

The global fire trucks industry is dominated by the Asia Pacific and is expected to continue its dominance throughout the forecast period. The presence of key low-cost manufacturers of China coupled with the rising demand from residential & commercial applications in emerging economies such as China, South Korea, and India majorly drive the market growth. 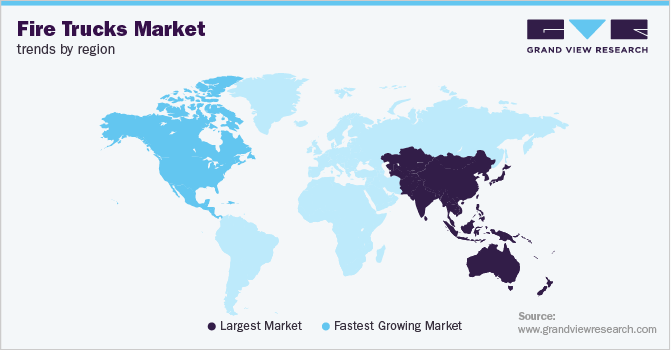 China is one of the largest markets, both in terms of production as well as consumption. The high production capacity and supply are driven by the considerably low costs of production. In addition, the country is an industrial hub for several manufacturers across the globe. Increased consumption of fire trucks is anticipated in applications such as commercial, enterprises, and airports, owing to the aforementioned factors,

The North America market contributed to around 1.2 billion in 2015. The North American production value witnessed a significant increase primarily driven by the increased demand from the residential & commercial application segment. Furthermore, the growing requirement of advanced safety infrastructure in residential buildings, commercial complexes, and is expected to augment the market demand.

Europe, Middle East & Africa (EMEA market is characterized primarily by consumption in applications such as enterprises, industries, airports, and military. The European fire trucks are narrow and tight in design, as compared to the trucks used in the U.S. This can be attributed to the presence of several narrow lanes within the cities of Europe, as opposed to wide roads found in the U.S.

The global market is very competitive due to the presence of a large number of established manufacturers and suppliers. Major players such as Rosenbauer International AG, Oshkosh Corporation, Magirus GmbH, and Weihai Guangtai have adopted product innovations and numerous strategic alliances for strengthening their global positions, which are being followed by emerging industry players.

This report forecasts revenue growth at the global, regional, and country levels and provides an analysis of the latest industry trends in each of the sub-segments from 2016 to 2024. For the purpose of this study, Grand View Research has segmented the global fire trucks market report on the basis of application, and region. 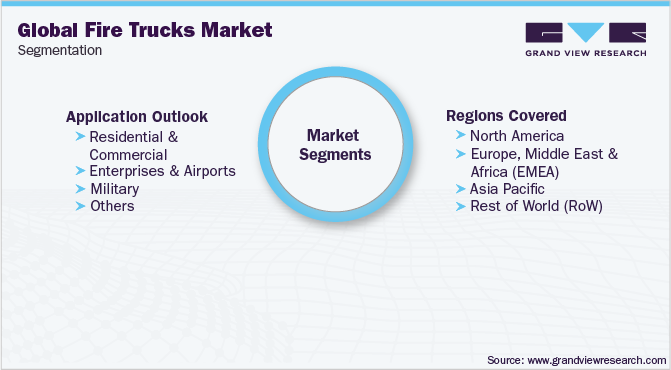