The global flavonoids market size was estimated at USD 410.1 million in 2015. Flavonoids are naturally occurring groups of phytonutrients comprising antioxidant properties. These are primarily found in various plants and are responsible for the color of any vegetable, fruit, grain, or flower including carrots, tea, citrus fruits, berries, broccoli, peppers, squash, tomatoes, eggplant, and soybean.

Flavonoids are used in numerous applications including functional food & beverages, dietary supplements, cosmetics, and pharmaceuticals. They are used as sweetening and coloring agents in the food industry. They inhibit cancer cell growth, cure stomach ulcers, and have anti-microbial action, thus preventing infections. 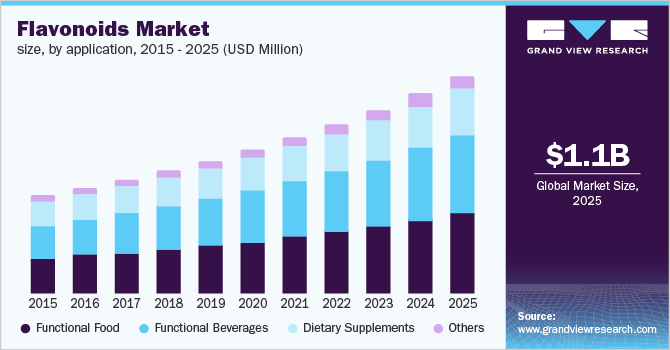 The application of flavonoids in functional food held the largest share of over 30% in terms of value, in the U.S. market in 2015. Increased use of anthocyanin, a major flavonoid, as a coloring agent in the food & beverage industry, was the major driving factor of the market in this segment. Although it is easier to consume flavonoids in their natural form, changing the food consumption habits of consumers has led to their utilization in the form of various functional food products.

Anthocyanin is also a hypoglycemic agent that reduces the human blood sugar level. It is a histamine blocker and stops inflammation due to allergies, cardiovascular diseases, arthritis, and stomach ulcers. These properties are expected to fuel its growth over the next nine years.

Anthocyanins, flavones, and anthoxanthins were some of the common types of flavonoids. Anthocyanins accounted for the majority of the share in terms of both, volume and value, in 2015. Growing awareness about wellness and health has resulted in increasing consumption of anthocyanin-rich food & beverages.

The market for flavones is expected to witness the highest CAGR over the forecast period. They are known to possess anti-oxidant, anti-tumor, anti-inflammatory, and anti-microbial properties, which make them useful in the pharmaceuticals and personal care industries.

As seen in the below figure, the functional beverages segment dominated the global flavonoids market in 2015. It was valued at over USD 150 million in the same year. This product improves metabolic processes in the myocardium, thus inhibiting thrombus formation. Consumption of flavonoid-containing drinks helps to stimulate the immune system, control adversity of anthropogenesis, and reduce the teratogenic mutagenic carcinogenic effect, thus augmenting demand over the forecast period. 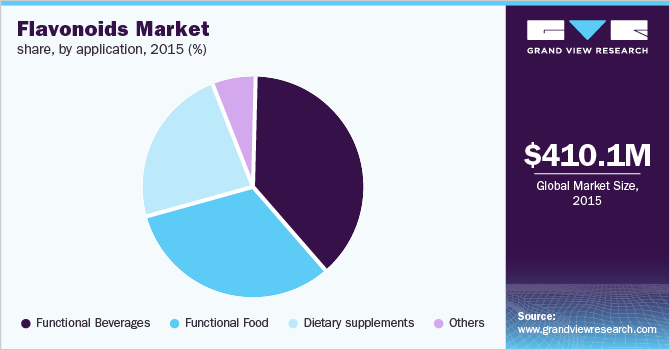 Increasing focus on nutritious food coupled with rising concerns regarding a variety of diseases including obesity, diabetes, blood pressure, and cancer is expected to propel the growth of the market over the forecast period. A wide range of benefits has led to the increased popularity of this product over the past few years.

North America was the largest market accounting for over 35% of the global revenue in 2015. Numerous preventable, diet-related chronic ailments including cardiovascular diseases, type 2 diabetes, overweight, and obesity are highly prevalent in North America. This has led to an increased demand for dietary products such as flavonoids.

The Asia Pacific demand was over USD 110 million in 2015 and is anticipated to witness significant growth owing to the rising consumption of nutraceutical products. Changing consumer lifestyles, a high youth population, and the increasing popularity of sports are expected to have a positive impact on this industry over the forecast period. In addition to these, rising disposable incomes of consumers especially in China and Japan are expected to augment growth in the region.

The market in Europe is expected to grow at a relatively slower rate owing to the rise in the aging population in this region. Prevalence of diabetes, obesity, and chronic diseases are likely to propel the demand for nutritional functional food & beverages in Europe. Increasing health consciousness among the consumers in this region is expected to give rise to the demand for this product over the forecast period.

Expansions & investments and agreements & partnerships were the major growth strategies adopted by these players. For instance, in March 2014, Indena entered into a partnership with Azelis, a leading global specialty chemicals distributor, in order to distribute its pharmaceutical and health food products in the European market.

This report forecasts revenue and volume growth at global, regional & country levels and provides an analysis of the industry trends in each of the sub-segments from 2014 to 2025. For the purpose of this study, Grand View Research has segmented the global flavonoids market on the basis of product, application, and region: