The global flow computers market size was valued at USD 739.6 million in 2017 and is expected to grow at a compound annual growth rate (CAGR) of 7.8% from 2018 to 2025. Increasing need for technologically advanced computing systems has been driving the market across the globe. Adoption of advanced flow computing technology is estimated to increase in industries such as oil & gas, water & wastewater, automotive, and food & beverage. 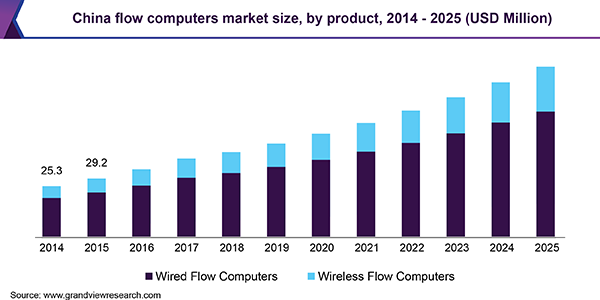 Furthermore, introduction of technologically advanced such as scanner model, single stream, and multi-stream flow computers is expected to work in favor of the market during the same period. The oil & gas, chemical, and water & wastewater industries are widely adopting process automation owing to reduction in cost of technology, labor cost, and fuel prices.

Surging demand for flow computers in North America can be attributed to growing demand for automation of oil & gas operations. The region held the highest share in the market in 2017 on account of presence of a large number of manufacturers and suppliers. Soaring need for advanced and reliable computing is responsible for the growth of the market.

Based on component, the market is segmented into hardware, software, and services. The hardware segment accounted for the largest market share in 2017. It is likely to continue to dominate the market through 2025. Hardware includes mounting adapters and other related tools & accessories.

Flow computer software helps access data files downloaded from a computer, which allows users to view, print, and export configured data to meet an auditor’s requirement. It is used to audit and verify produced data. The segment is poised to witness the highest growth during the forecast period.

The service segment is also projected to witness substantial growth during the same period. The growth of the segment can be attributed to presence of service providers who offer customized services at lower prices. Furthermore, installed computers often demand regular servicing and maintenance, which is anticipated to contribute to the growth of the segment.

Based on product, the market has been segmented into wired and wireless flow computers. The wired segment accounted for the dominant share in the global flow computers market in 2017. It is estimated to retain its position through 2025, owing to growing use of electronic computers and computing measurements in the process industry. The water & wastewater, oil & gas, and chemical industries are expected to fuel the demand for flow computers during the forecast period. The wireless segment is likely to witness significant growth during the forecast period as this type of flow computer offers improved protection during data integration as compared to conventional automation solution.

Based on application, the market is segmented into oil & gas, water & wastewater, energy & power generation, food & beverage, chemical, pulp & paper and metal & mining, and others. The oil & gas industry is poised to lead the market throughout the forecast period. 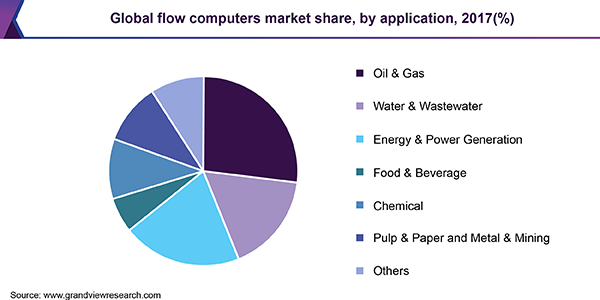 Burgeoning demand for shale oil & gas has been fueling the demand for flow computers in the sector. Electronic computers record input signals and interpret data from flow meters. The interpreted data is processed using standard algorithms to calculate mass or volume-based flow, which is used in flow measurements in the oil & gas industry.

The water & wastewater industry in Asia Pacific is projected to be one of the prominent end users of the product. Countries such as China, India, South Korea, and Australia in Asia Pacific are witnessing industrial development and rapid urbanization, which are escalating the need for water supply and wastewater treatment, further supplementing the growth of the segment.

North America represented more than one third of the overall market revenue in 2017. The growth of the region can be attributed to domicile of a large number of flow computers manufacturers. The U.S. is one of the prominent manufacturing hubs and providers of electronic computer products such as Emerson Electric Co.; Yokogawa Corporation of America; Schlumberger Limited; and Honeywell International Inc.

Countries in Asia Pacific such as China, Japan, India, and Australia are anticipated to generate considerable revenue over the coming years owing to development of advanced products and increasing number of manufacturing facilities. The region is estimated to post the highest CAGR during the forecast period. In Europe, electronic computers are widely adopted for water and wastewater management. Europe is expected to rise to the fore in the global arena by 2025.

In October 2015, Emerson Electric Co announced the next generation of flow computers family, designed to offer faster and reliable measurements. Likewise, in May 2018, Thermo Fisher Scientific Inc. launched a new range of measurement instruments, namely Thermo Scientific AutoXP flow computer. The key manufacturers are focusing on introducing advancements in electronic computers to record data more accurately. Some of the prominent players in the flow computers market include:

This report forecasts revenue growth at global, regional, and country levels and provides an analysis on the industry trends in each of the sub-segments from 2014 to 2025. For the purpose of this study, Grand View Research has segmented the global flow computers market report based on component, product, application, and region:

How big is the flow computers market?

What is the flow computers market growth?

Which segment accounted for the largest flow computers market share?

b. North America dominated the flow computer market with a share of 33.9% in 2019. This is attributable to the presence of a large number of flow computer and electronic computer product manufacturers in the region.

Who are the key players in flow computers market?

What are the factors driving the flow computers market?

b. Key factors that are driving the market growth include increasing need for technologically advanced computing systems along with adoption of advanced flow computing technology in industries such as oil & gas, water & wastewater, and automotive.