Fondaparinux Market Analysis by Product (Branded/Generic), and Segment Forecasts to 2024

The global fondaparinux market was valued at USD 365.9 million in 2015 and is expected to witness a CAGR of 7.8% over the forecast period. The increasing base of health conscious population coupled with the presence of generic alternatives is estimated to boost market growth.

Arixtra, the generic version of Fondaparinux was approved by the U.S. FDA to treat pulmonary embolism, Deep Vein Thrombosis(DVT), and to avoid the occurrence of DVT during surgeries in the U.S. and Europe. Moreover, the researchers are constantly working on identifying broader applications of the molecule. The Piedmont Hospital of Atlanta established the use of Arixtra as a safe alternative for patients with thrombocytopenia. In November 2014, researchers established the long-term use of Fondaparinux in cancer patients. 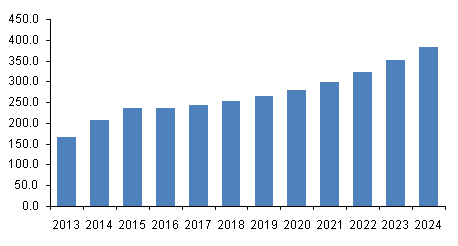 The increasing prevalence of thrombocytosis coupled with growing demand for fast-acting and more efficient therapeutics is estimated to propel market growth. Fondaparinux is reported to be more efficient than low-molecular-weight heparin in terms of post administration side effects, such as severe bleeding and mortality.

The increasing geriatric population is fueling the prevalence of diseases, such as heart diseases and orthopedic conditions. In addition, the risk of diabetes and cardiovascular disease increases with age, yielding a higher incidence rate in adults aged 60 years and above. With the increasing aging population, the need to control preventable deaths, such as those caused by cardiovascular diseases, is important.

Generic drugs were the largest selling product type in 2015

On the basis of products, the market is divided into branded and generic fondaparinux. Fondaparinux is the generic form of the injectable blood thinner, Arixtra. Subcutaneous or intravenous injection of this drug fights DVT and pulmonary thromboembolism.

Difficult manufacturing process of this drug is responsible for its high price, which limits its consumption. However, with advancements in the manufacturing facilities, the difficulties in the processes are reduced to a great extent. This is expected to be an important driving factor leading to a rise in the demand for the generic form of Fondaparinux over the forecast period.

The healthcare payers, as well as the government, are heavily promoting the usage of generic drugs. In North America, generic drugs account for more than 70% of the market by volume and European countries account for around 55%. Several countries including France, Japan, and Spain have adopted favorable generic policies that encourage healthcare professionals to prescribe generics for branded products. Generics are anticipated to witness a lucrative CAGR of 9.3% over the forecast period.

North America dominated the overall market in terms of revenue in 2015 owing to the high incidence rates of blood tumors; increasing prevalence of diseases, such as cardiovascular, hematological, and neurological; and the introduction of various generic drugs. North America generated revenue of over USD 235.0 million in 2015.

China is considered as the powerhouse for manufacturing and sourcing various APIs and drug formulations. China is expected to be an evolving market for key pharmaceutical companies due to the presence of target population and high unmet clinical needs. Market share of China is estimated to be over 3.3% in 2024.

Companies like Dr. Reddy’s Laboratories, Inc.; GSK group of companies; Mylan N.V.; and Alchemia SA hold dominant positions. The Fondaparinux market is marked by the presence of mergers and acquisitions. For instance, in September 2014 Mylan N.V. announced the acquisition of the U.S. marketing and IP rights for the Arixtra injection and the generic form of the same drug from Aspen Global, Inc.

The sector has also witnessed a few strategic alliances. For instance, Alchemia Ltd. partnered with Dr. Reddy’s Laboratories Ltd. and launched the drug in the U.S. in 2011.