The global football shoes market size was valued at USD 18.16 billion in 2021 and is expected to expand at a compound annual growth rate (CAGR) of 5.3% from 2022 to 2030. The market growth is attributed to the increasing availability of the football infrastructure, encouraging participation from the players at various levels, and spending on football shoes. Over the forecast years, the market is expected to perform well owing to the popularity of football, rising health consciousness, and increasing football play as an athletic activity. Football is one of the most popular sports across the world. For instance, according to the Huffington Post, around the world, approximately 265 million people play football/soccer on regular basis. 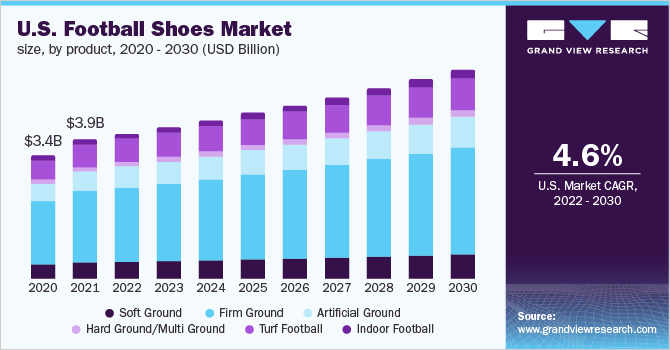 The Covid-19 pandemic negatively affected the overall market for football shoes. The Covid-19 pandemic resulted in lockdowns and restrictions, which affected the supply chain activities, manufacturing sector, and logistics. In addition, on the demand side, the market witnessed a negative impact. Due to the restrictions, many tournaments, championship games, and group activities were postponed and canceled. Since football games at all levels were canceled, the demand for football shoes plummeted significantly. Nike Inc. recorded a negative 4% growth rate in the footwear section. Over the forecast period, the market is expected to recover owing to the demand bounce back and increased consumer inclination to spend.

The market growth is accelerated by the initiatives and promotional activities. Such activities are helping in growing the popularity and increasing the participation in football, thus driving the spending on football shoes. Increasing investment in women’s football and increasing tournaments for women are being observed. For instance, women’s football is gaining immense popularity in the U.K. and the EU. In May 2022, Football Association announced one of the major deals with Sky Sports and BBC for the broadcasting rights of the Women’s Super League. This is likely to raise the popularity of the game among women and men.

Key players actively focus on new product development and sustainable technology to introduce new products with enhanced functionality and capabilities. The market growth is expected to be facilitated by the increasing product launches and research and development activities. For instance, Adidas AG launched Edge of Darkness in Adidas Copa Sense and Adidas X Speedflow product line. These boots are predominantly black with subtle details of red, blue, and white in them. Moreover, in June 2022, Nike Inc. unveiled Nike Zoom Mercurial football shoes. The launch consisted of Air Zoom Mercurial IX 'Disruption' available in white, black, and red, and Air Zoom Mercurial 'Bonded' in multi-color form. Nike Air Zoom Mercurial is made with at least 20% recycled material by weight.

The market growth is restrained by the increasing awareness about the adverse impact of manufacturing on the environment. According to the Centre for a Humane Economy, around 2 million kangaroos are being massacred yearly for the production of football shoes. The skin of the kangaroo is used in the production of athletic shoes. In 2021, the Kangaroo Protection Act was introduced in the U.S. parliament, which bans the sales of kangaroo body parts in the U.S. Moreover, the waste production yearly leads to land pollution on a large scale. The increasing awareness campaigns held by organizations and environmental groups are likely to challenge the growth of the market.

In the global market, indoor football is gaining popularity, offering a new opportunity for the key players of the market. Futsal, which is the type of indoor football, is witnessing positive feedback, mostly in the European region. Futsal is a dynamic and entertaining type of football game, played with a five-a-side version. The popularity has also been boosted in the 2021 FIFA World Cup. Additionally, in developing nations, such as India, indoor football, futsal is gaining momentum. According to the All India Football Federation (AIFF), this shorter version of the game has tremendous potential in India, and authorities continue to aim at the development of futsal over the forecast period.

The firm ground segment accounted for the largest revenue share of over 50.0% in 2021 and is expected to witness strong growth over the forecast period. This is owing to the large popularity of the type among football players. The firm ground shoes are molded football shoes and are for grass pitches. When the ground is somewhere between hard and wet, firm ground shoes are excellent for playing football and are the most popular choice among players. On the basis of product, the market is segmented into six categories mainly, soft ground, firm ground, artificial ground, hard ground/multi ground, turf football, and indoor football.

Over the forecast period, the hard ground/multi ground segment is anticipated to register the highest growth rate of 6.4%. Hard ground/multi ground shoes are a better choice of shoes for early pre-season football games. This type of shoes is meant for hard ground mostly in summer, where the studs/cleats are designed for penetrating the surface. These type of shoes provides better comfort for players and allows them to have the distribution of even weight, which reflects in less chances of slipping/twisting.

In 2021, offline distribution channel accounted for the largest revenue share of over 70.0%. The offline segment consists of shopping malls, departmental stores, brick and mortar sports stores, etc. This is attributed to consumer perception and consumer shopping behavior. Consumers consider offline/ brick and mortar stores to be a more trustworthy and authentic source for shopping compared to their counterparts. Additionally, when buying football shoes, the trial of the product is an important factor to choose the most suitable product. Physical trial and verification of the product that are enabled by the offline distribution channel also significantly impact consumer buying decision. On the basis of distribution channel, the market is segmented into offline and online. 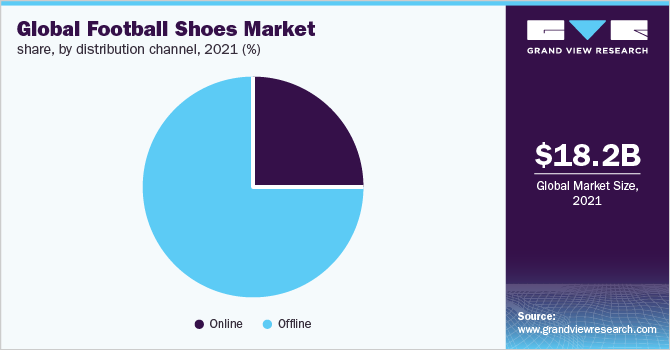 Online distribution channel is estimated to register a lucrative CAGR of 6.0% from 2022 to 2030. The growth of the segment is substantially attributed to the increasing usage of online/e-commerce platforms. Due to the comfort and convenience of operation, more consumers are inclined towards online shopping and e-commerce for various things from daily needs to apparel and footwear. The growth is also facilitated by the increasing share of generation z and generation y. Over the forecast period, generation z is likely to bring a shift in the overall shopping behavior of the consumers. Moreover, the Covid-19 pandemic encouraged many consumers to register and use online shopping apps. A survey conducted by the Drapers revealed that around 28% of generation z and 24% of millennials plan to shop online more than before.

The European region held the largest revenue share of over 30.0% in 2021. This is attributed to the high popularity of football sport in European countries and higher consumer spending on football-related items, including football shoes. In European countries including Germany, France, Poland, Bulgaria, Romania, and Italy, football is one of the most popular sports, ranking among the top 5 sports. Adidas, Puma, and Nike have excellent distribution networks, with Adidas and Puma headquartered in Germany. The popularity of the game, the strong presence of key players, and higher consumer spending are fueling the growth of the regional market.

The Middle East and Africa is expected to witness the fastest growth rate of 6.2% over the forecast period. The growth is facilitated by the rising popularity of the sport and increasing spending on football items in the region. Football is gaining popularity in the Middle Eastern and African countries and football associations are taking initiatives to form and organize various tournaments. With the rising disposable income, the region is expected to exhibit a promising growth rate over the forecast period. For instance, soccer academies are opening across the African continent. In Ghana, Right to Dream, a non-profit academy, helps and prepares young athletes to play at A higher level.

Key players in the market are actively focusing on developing new techniques and introducing new products in the market to encourage consumer spending. Moreover, expansion to new geographical locations and expansion of brick and mortar stores are being opted by the key players. For instance, in March 2020, Adidas and Google introduced smart football insoles for smart football boots. The technology developed by the team is known as Adidas GMR, and it focuses on the integration of the physical sport with a digital experience. Some prominent players in the global football shoes market include:

This report forecasts revenue growth at the global, regional, and country levels and provides an analysis of the latest industry trends and opportunities in each of the sub-segments from 2017 to 2030. For the purpose of this study, Grand View Research has segmented the global football shoes market report on the basis of product, distribution channel, and region:

How big is the football shoes market?

What is the football shoes market growth?

Which segment accounted for the largest football shoes market share?

b. Europe dominated the football shoes market with a share of 30.83% in 2021. This is attributable to the high popularity of football sport in European countries along with increasing tournaments for women, especially in the UK.

Who are the key players in the football shoes market?

What are the factors driving the football shoes market?

b. Key factors that are driving the football shoes market growth include the availability of the football game infrastructure, increasing tournaments encouraging more participation at various levels, and spending on football shoes.