The global footwear market size was estimated at USD 373.19 billion in 2021 and is expected to register a compound annual growth rate (CAGR) of 4.3% from 2022 to 2030. The growing sales facilitated by e-commerce, extensive spending on advertising by footwear brands, and rising demand for athletic footwear are the major factors driving the market’s growth. Furthermore, the rising instances of lifestyle-related health issues, such as stress and obesity, are pushing an increasing number of people to engage in sports and fitness activities, which is fueling the demand for comfortable and stylish footwear. Comfort became a top priority for consumers well before 2020. For years, fashion footwear has been losing market share to more comfortable and athleisure-oriented segments. 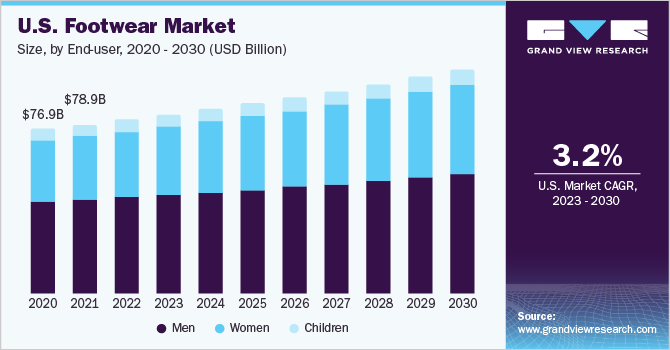 The increased demand for sustainable footwear is a trend that is gaining traction in the global market. According to the U.S. Department of the Interior, around 20 billion pairs of footwear are created annually, and approximately 300 million end up in landfills, with a majority of them containing non-biodegradable materials. There has been a growth in the use of sustainable materials and sustainable footwear brands, that have built sustainability into their brands from their inception. For instance, Nike with Nike Grind experimented with breaking down footwear into pellets, turning them into material for flooring instead of new footwear.

The footwear industry is labor-intensive and is affected by various factors such as land resources, labor costs, material supply, environmental protection, and sales markets. Consequently, in the pursuit of profit maximization, major consumer markets, footwear manufacturers, wholesalers, and retailers worldwide are shifting their focus to lower-cost countries, leading to the constant movement of global shoemaking bases. Japan, Taiwan, India, and China are lucrative markets for footwear.

According to data published in World Footwear Yearbook 2021, the year 2020 was tough for the footwear industry, but it turned out to be better than predicted. In 2020, footwear production and exports fell by 15.8% and 19%, respectively. Forecasts for the development of the consumer sector economy in 2020 were the gloomiest, in particular, the fall in global footwear consumption in the year the pandemic began was predicted at 20% or more. The final data for 2020 in the developed countries of Europe and North America correspond to this forecast. But Asia and the less developed countries were in a better position, which was reflected in the fact that the decline in the global footwear industry was not as significant as expected.

The athletic segment will register the fastest CAGR in the forecast period. Athletic shoes are worn by people who are involved in outdoor activities, such as running, walking, gymming, and playing sports like basketball, volleyball, cricket, hockey, and golf. Athletic shoes provide comfort, flexibility, and traction on outdoor platforms such as roads and trails as well as provide benefits like torsional stability, superior cushioning, and better protection to the users. The demand for comfortable, lightweight, and fashionable sports shoes from professional players for usage on wet, soft, and rough ground is propelling the athletic segment’s growth. The increasing participation and inclination of people toward daily physical activities such as running, gymming, and cycling is the major factor driving the growth of athletic shoes across the globe. 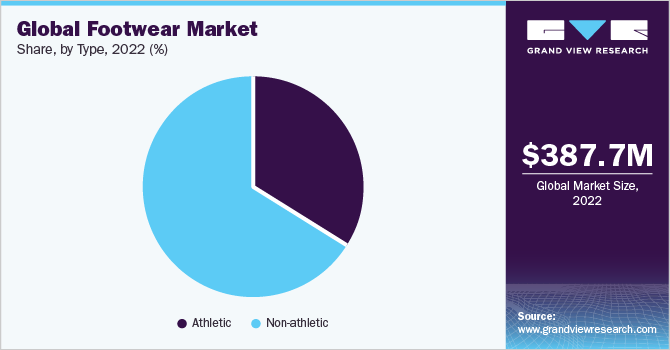 The non-athletic segment had the highest contribution and will continue to do so during the forecast period. The non-athletic category consists of flats, heels, mules, sandals, sneakers, and boots, which can be worn on different occasions. A large number of niche, big market players, and designers worldwide have been contributing to this broad category of footwear, owing to the growing consumer inclination toward eco-friendly sneakers and footwear. Reduced use of water and plastics, coupled with constant efforts from various multinational corporations in shifting toward sustainable products, has contributed to the rising adoption of sustainable footwear, thereby driving the demand for non-athletic footwear.

Men shared a majority segment in the footwear industry in the end-user segment. The inclination of men toward outdoor activities has been driving the demand for men’s footwear. Sports such as golf, cricket, hockey, and hiking have always been popular among men. Hence, product launches catering to specific sports categories will help boost the men’s footwear business growth. The emergence of high-end e-commerce sites is expected to act as a growth driver for the men’s footwear industry in the future.

The women’s segment is anticipated to witness the highest CAGR owing to dedicated lines of brands of female footwear. Product launches, collaborations, expansion into new markets, and innovations in sustainable footwear by manufacturers have been driving the women’s segment. For instance, Veja footwear company made its debut in the Indian market with the women’s V-10 sneaker series in collaboration with Bhaane, a multi-brand store.

The Asia Pacific region held the highest share 39.3% in 2021 and is expected to continue the trend during the forecast period. The footwear industry is labor-intensive and is affected by various factors such as land resources, labor costs, material supply, environmental protection, and sales markets. Consequently, in pursuit of profit maximization, major consumer markets, footwear manufacturers, wholesalers, and retailers worldwide are shifting their focus to lower-cost countries, leading to the constant movement of global shoemaking bases. Japan, Taiwan, India, and China are lucrative markets for footwear in the Asia Pacific. Rising disposable income and improved living standards of the consumers are key factors accelerating product demand in these countries. 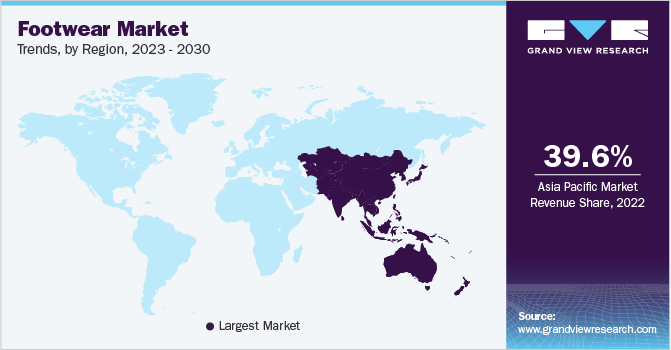 The North America region is projected to grow at a significant CAGR during the forecast period owing to the presence of major footwear manufacturers in the region. Footwear remains one of the most popular items Americans purchase. Footwear firms invest tens of millions of dollars each year in their employees, stores, and platforms to ensure that they provide high-quality shoes on time. The footwear industry has one of the world's most resilient supply chains. The increasing demand for stylish and comfortable footwear among consumers is fueling the market. The growing popularity of sports such as football, basketball, and various snow sports is expected to create strong opportunities for the growth of the market in the North America region.

The global footwear market is characterized by the presence of several well-established players. The market comprises small-to-midsized players, that offer a selected range of footwear. Companies in the market are focusing on collaborations to introduce innovative products to address the evolving needs of customers and to gain a competitive edge over other manufacturers. For instance:

Some of the key players operating in the global footwear market include:

This report forecasts revenue growth at global, regional & country levels and provides an analysis of the latest trends and opportunities in each of the sub-segment from 2017 to 2030. For this study, Grand View Research has segmented the global footwear market based on type, end-use, and region: 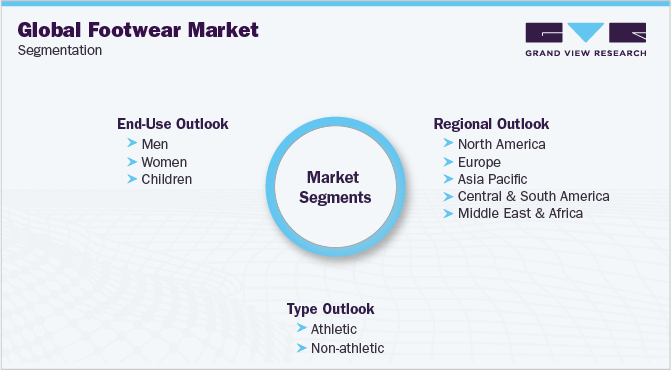 How big is the footwear market?

What is the footwear market growth?

Which segment accounted for the largest footwear market share?

b. The Asia Pacific dominated the footwear market with a share of 39.3% in 2021. This is attributable to an expanding customer base of fashion-conscious consumers in countries including China, India, and Japan.

Who are the key players in the footwear market?

What are the factors driving the footwear market?

b. Key factors that are driving the footwear market growth include the rising popularity of leather shoes and the increasing adoption of footwear made from sustainable materials.