The global fracking chemicals & fluids market size was valued at USD 23.98 billion in 2016 and is projected to grow at an estimated CAGR of 10.3% from 2017 to 2025. Growing energy demand for energy owing to the increasing population is expected to be the key factor driving the market growth.

Chemicals are added to water and sand to obtain the desired mixture of fracking fluid. A huge quantity of chemicals, approximately 40,000 gallons is used in one fracturing operation. Usually, around 4 to 12 additives are required per fracturing operation. Various additives including, sodium chloride, ethylene glycol, guar gum, citric acid, polyacrylamide, acetic acid, hydrochloric acid, potassium carbonate, and borate salts, can be used as per the requirements of the well being drilled. 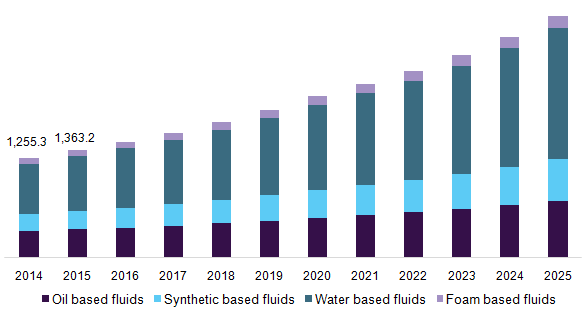 Fracturing fluids are usually a mixture of proppant, water, and chemical additives. Various other compressed gases including, carbon dioxide and nitrogen, along with gels are added into the mixture as per the requirements. Numerous proppants including, silica, bauxite, resin-coated sand, and ceramics, are also added to the mixture according to the grain strength and permeability needed.

The fracking chemicals used vary depending on the water characteristics, well conditions, and the desired fracturing type. The mixture utilized can be water-based, oil-based, synthetic-based, or foam-based. The fluids utilized are injected into the wells at a high velocity to create large fractures in order to allow the drill to pass through easily. The important factors of fracking fluids consist of pH, viscosity, and rheological factors.

Companies in the market are investing in R&D activities and are striving towards the development of environment-friendly fracking chemicals. Development of new products, including non-toxic drilling fluids and foams as an alternative to toxic oil-based fluid (OBF), which is difficult to remove from the drill hole is anticipated to drive the industry growth.

Fracking chemicals are mixed with various additives as per the requirements of the fracturing operation. As the process of drilling proceeds additives including enzymes and oxidizers are injected to allow the backflow of fluids. The oxidizers and enzymes break the gelling effect and thus reduce the viscosity of the fracking fluid.

WBF is anticipated to witness the fastest growth at an estimated CAGR of 9.2% over the next eight years and has been the most common product for use in the drilling wells. WBF are non-viscous with minor concentrations of proppants, and can be pumped at a higher rate, in order to obtain narrow fractures. The various properties of WBF including, high fluid efficiency, minor proppant concentration, and high rate of pumping, enable to obtain complex fractures.

WBF consist of freshwater, brine, saturated or formate brine. Growing concern towards environmental impact of oil & gas operations is anticipated to raise WBF demand over the forecast period. OBF are used in low quantities across the hydraulic fracturing industry, owing to their adverse impact on the environment associated with water discharge.

Environmental impact depends on the way pollutants are dispersed throughout the environment. OBF and cuttings, when discharged under water, may form piles of mud and cuttings that cover parts of the seabed. High oil concentrations can adversely impact sub-sea fauna and flora along with the surrounding ecology. Toxic sulfides may be produced when OBF decompose and can result in total eradication of sea organisms close to the rig.

OBF accounted for over 25.0% of the overall market in 2016. The various harmful effects of OBF have resulted in the development of less toxic and environmentally friendly SBF which exhibit high performance in drilling operations. SBF are also more biodegradable as compared to OBF. The various properties of SBF including, low bioaccumulation, low toxicity and low fluid loss, are anticipated to drive the market over the forecast period.

In recent years the trend is shifting from vertical to horizontal drilling type, owing to large area covered by the horizontal drilling type. Horizontal wells give drillers access to a much wider area and extract oil at very slow rates from a reservoir. Vertical wells on the other hand extract oil in a short duration through boreholes of shorter lengths. There is a reduction in the heterogeneous influence associated with the flow geometry of horizontal wells, along the long drain, which thus increases the total production.

Horizontal wells accounted for over 76% of the overall market in 2016. Horizontally drilled wells give access to by-passed and isolated gas and oil accumulations within a large field. This allows the extraction of natural gas in huge quantities. Horizontal wells make it possible to harness more energy with few wells, thus making it more productive and efficient as compared to vertical wells. Although there are huge benefits of horizontal wells; drilling these wells is expensive and highly complicated.

Horizontal well are very costly as compared to vertical wells, but the various advantages of horizontal wells outweigh the cost of it. Complex well formations, which garner the risk of immature gas or water production, and which have a narrow oil column; render vertical wells inefficient. In such scenarios horizontal wells prove to be the most useful, and help to extract energy with minimum risk.

Vertically drilled wells, give access only to the natural gas which is available at the immediate end of the well. Vertical wells do not require directional boring, as they have to be drilled in just one direction. This factor makes the vertical wells less expensive and complicated as compared to horizontal wells. Recent developments in directional drilling technology have made vertical drilling outdated.

Fracking chemicals are utilized for various purposes including, carrying the proppant to the desired formation, to improvise gel strength, to provide lubrication and to enlarge the fractures. The rising demand for fracturing chemicals and fluids from energy intensive industries is expected to fuel the market growth over the forecast period of 2017 to 2025. The fluids are usually transported in two manners including, high viscosity and high rate. For this purpose, gelling agent is utilized for thickening water and thus enabling injection of high viscosity fracturing chemicals which causes the fractures to expand considerably. 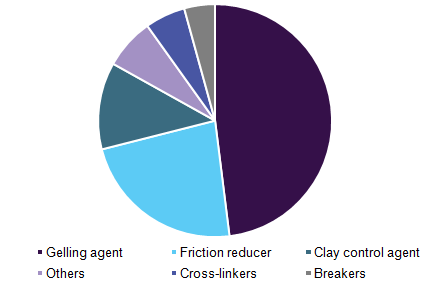 A major challenge in the market is to meet rising demand for solutions that can increase production rates in conditions such as high temperature and pressure in extended reach wells. In order to meet this challenge, cross-linkers, and breakers are utilized to keep the fracking fluid stable in terms of viscosity, and gelling ability; even at high temperatures.

Friction reducer accounted for over 23.0% of the total market volume in 2016. The function of friction reducers allows high injection rates by reducing the friction in pipes. Buffers are utilized to maintain the pH value of fluids even in harsh conditions such as high temperature & pressure. The clay control agent reacts with the clays in the rocks and formations via sodium-potassium ion exchange, and helps stabilize the clay in shale structure.

Biocides helps to eliminate various bacteria present in water which cause the adulteration of final products. Biocides are majorly utilized in WBF as they are more susceptible to bacterial attack on account of the natural gum and starch content in them. Biocides are also known as bactericides, which are utilized to control slime-forming bacteria, sulfate-reducing bacteria and iron-oxidizing bacteria, in recovery fluids and fractures.

North America accounted for over 83% of the total market volume in 2016. The drilling industry is highly developed in the region, and thus the requirement of fracking chemicals in the region is high. Particularly the U.S. has a well-established drilling & exploration industry and thus has a large share in the global industry.

In terms of revenue the region of Asia Pacific is anticipated to grow at an estimated CAGR of 13.8% over the next eight years. Growing energy consumption and rising demand for energy, are expected to remain key driving factors for the growth of market. Currently, majority of oil and gas E&P activities are centered in China, South Korea, Australia, and India.

Rising oilfield production in Europe owing to deep water discoveries in the North Sea is anticipated to drive the fracking chemicals demand over the next eight years. Significant oilfield development in unconventional and offshore reserves along with high rate of deployment of mud-cap drilling technique in the region is anticipated to create new opportunities for the fracturing chemical companies in the near future.

Established players including Halliburton Company, and Cargill Inc., have initiated the production of bio-based drill muds in order to expand their product portfolio. Major players including BASF SE, Schlumberger, Halliburton Company, have integrated their operation and are involved in the entire value chain of fracking chemicals, including, manufacturing, distribution and end-use.

Manufacturers and buyers engage in long term contracts with distributors for consistent product supplies. Stringent government regulations regarding the adverse environmental impact of using and disposing of chemicals is anticipated to be a challenge to new entrants in the industry. Technological advancements to modify the fluid rheology for efficient extraction in different formations have created lucrative avenues for industry participants.

This report forecasts revenue growth at global, regional & country levels and provides an analysis on the industry trends in each of the sub-segments from 2014 to 2025. For the purpose of this study, Grand View Research has segmented the global fracking chemicals and fluid market on the basis of product, well type, function and region:

How big is the fracking chemicals and fluids market?

What is the fracking chemicals and fluids market growth?

Which segment accounted for the largest fracking chemicals and fluids market share?

b. North America dominated the fracking chemicals and fluids market with a share of 84.9% in 2019. This is attributable to presence of well-established drilling & exploration industry.

Who are the key players in fracking chemicals and fluids market?

What are the factors driving the fracking chemicals and fluids market?

b. Key factors that are driving the market growth include growing energy demand for energy owing to the increasing population and shifting trend towards horizontal drilling.