The global fruit beer market size was valued at USD 266.9 million in 2019 and is anticipated to witness significant growth in the years to come. Growing consumer preference for alcohol-free beer, along with increasing awareness regarding the inherent health benefits associated with fruit beer, is expected to fuel demand for the product. Additionally, the growing popularity of fruit beer among women as an occasional drink is expected to favor the market growth in the upcoming years. 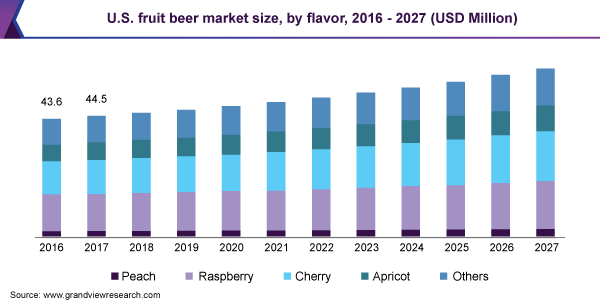 Over the past few years, fruit beer has been gaining popularity from Belgium to other parts of the globe. Unlike conventional beer products, these fruit drinks are considered less harmful for human body and they rarely harm liver or kidneys. Such health advantages offered by fruit beer, along with its fruit aroma flavor characteristics, will propel the consumers to purchase these fruit drinks over the coming years.

Consumers’ inclination has been shifting towards low or alcohol-free beer due to increasing awareness. Vendors operating in the fruit beer market have been launching alcohol-free drinks with various flavors in order to offset the growing demand for low or alcohol-free beer. For instance, in June 2019, Anheuser-Busch InBev and Heineken launched the non-alcoholic beer in India, which will compete with beverage manufacturers, including The Coca-Cola Company and PepsiCo Inc., in brick and mortar stores and restaurants.

Products with attractive packaging is expected to remain one of the key buying criteria among consumers while purchasing fruit beer. Furthermore, the industry participants are expected to increase spending on launch of the products through social media websites, including Instagram and Facebook, in order to expand their buyer reach.

Improvement in the internet infrastructure at the global level has paved the way for the beverage marketing companies to utilize e-commerce channels to reach their buyers. Therefore, the industry participants are expected to establish tie-ups with third-party e-commerce channels in order to ensure the continuous supply of products to their customers.

The raspberry segment accounted for the largest share of 29.9% in 2019. This fruit beer variant is expected to remain one of the preferred products among consumers due to exceptional nutritional benefits of raspberry, including low-calorie content and high concentration of fiber, vitamins, and minerals. Furthermore, exceptional flavor characteristics of raspberry are expected to attract the consumers to purchase such products.

Cherry flavored products are expected to exhibit the fastest CAGR of 5.1% over the forecast period owing to high popularity of this fruit flavor among female consumers. Moreover, demand for soured flavored beer is growing among consumers, which, in turn, is expected to favor the growth of cherry-flavored products in the upcoming years.

The on-trade segment emerged as the largest distribution channel with a share of 65.4% in 2019. Increasing number of restaurants and cafés is a major factor contributing to the growth of the segment. Changing demographics, young consumers, and availability of beer options are also contributing to the sale of fruit beer through on-trade distribution channel. Increasing number of microbreweries and breweries as a result of the growing trend of socializing at pubs, bars, and liquor lounges among young consumers will favor the sales of fruit beer through on-trade channels. 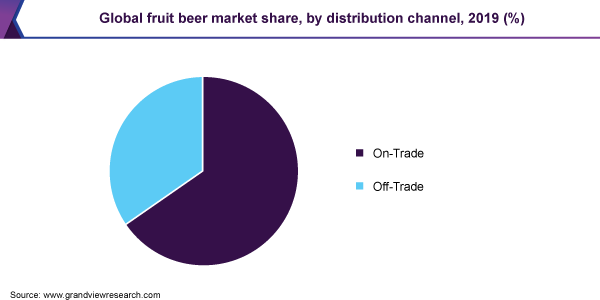 The off-trade distribution channel is expected to expand at the fastest CAGR of 5.1% over the forecast period. Flavors including raspberry, cherry, mango, and grape are steadily occupying shelves at supermarkets and hypermarkets owing to the growing demand for alcohol-free beer among health-conscious consumers. Increasing product visibility at supermarkets and hypermarkets is the main factor driving sales of fruit drinks through the off-trade channel. Furthermore, increasing number of hypermarkets in economies, such as India, China, and Brazil, is expected to contribute to market growth. For instance, according to the Brazilian Supermarket Association (ABRAS), Brazil had 89,368 retail stores in 2017, which increased by 0.4% as compared to 2016.

Europe dominated the market and accounted for a share of 40.0% in 2019. Presence of a large number of microbreweries and rising demand for alcohol-free beverages among the consumers of countries, such as France and the U.K., are expected to remain favorable factors for the regional industry growth. Beer making is considered to be a highly valued, traditionally supported industry in Europe, which is expected to pave the way for new players to invest domestically.

Asia Pacific is expected to expand at the fastest CAGR of 6.3% over the forecast period owing to growing popularity of beer in countries, such as India, China, and Japan, wherein the fruit beer industry foresees significant commercial opportunities and strong growth prospects. Rising awareness among consumers regarding the harmful effects of alcohol on human body is the major factor expected to drive demand for alcohol-free beer in the coming years. Additionally, increased number of quick-service restaurants in India and China on account of changing eating habits and growing trend of socializing at bars, pubs, and liquor lounges is expected to open avenues for fruit beer over the next few years.

High spending on R&D is expected to remain a critical success factor for the manufacturers operating in the market. As a result, the industry participants are expected to increase spending on exotic flavors, including dragon fruit, Chinese bayberry, passion fruit, and black carrot. Over the past few years, the consumers have been increasingly spending on exotic fruits and derivatives on account of their exceptional nutritional properties, including high vitamin C and dietary fiber content. Therefore, fruit beer companies are expected to utilize these exotic flavors for developing finished products for such buyers in the near future.

This report forecasts revenue growth at the global, regional, and country levels and provides an analysis of the latest industry trends and opportunities in each of the sub-segments from 2016 to 2027. For the purpose of this study, Grand View Research has segmented the global fruit beer market report on the basis of flavor, distribution channel, and region: