The global functional chewing gums market size was valued at USD 1.4 billion in 2019 and is expected to expand at a compound annual growth rate (CAGR) of 8.9% from 2020 to 2027. The growing popularity of functional chewing gums for curing the health conditions is expected to be a major factor driving the market. Products like tooth whitening gums, energy gums, weight reducing gums, sleep gums and focus gums have been welcomed by the consumers, which has opened up new avenues for the manufacturers. 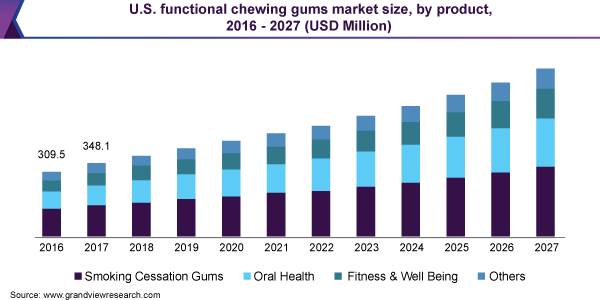 Organizations have been continually finding newer aspects for which functional chewing gums can be created. Mental well-being and stress relief are major issues that these functional chewing gum manufacturers have been trying to address. For instance, in June 2020, Rainbow, a French cannabis startup, was funded with EUR 1 million from private investors to create stress-relief products. The company also launched a wellness brand, Kaya. It creates cannabidiol-based chewing gums to help people fight stress daily with natural formulas appropriate for all situations.

Similarly, various other aspects of health have been drawing manufacturers’ attention and product innovation. For instance, in February 2020, Blockhead launched a ‘screwing gum,’ which promotes itself as an aphrodisiac. The product has been focused on its marketing, packaging, cheeky innuendos, and active presence on social media to attract many youngsters.

Smoking cessation gums led the market and accounted for more than 40.0% share of the global revenue in 2019. The increased number of smokers who are trying to quit smoking is expected to expand the scope of such products over the next few years.

The oral health chewing gums segment is expected to register the fastest CAGR of 9.6% from 2020 to 2027. These functional chewing gums are mostly sugar-free and are suggested to be used post-meal as they help in rinsing and neutralizing the acids released by the bacteria in plaque. These products help in saving the tooth enamel from getting destroyed eventually. Many of these products are rich in xylitol. Functional oral health chewing gums inhibit the growth of Streptococcus mutans, the cavity-causing bacteria, and create a healthier environment inside the mouth, which is much more bacteria-free.

Convenience stores led the market and accounted for a share of more than 35.0% in the global market revenue in 2019. Chewing gums are considered to be perfect for checkout and point-of-purchase impulse buying as most of these are priced below USD 20. These not only enhance the sales of the stores but also contribute to the visibility of functional chewing gums. Furthermore, as these products have started to contribute to lifestyle, they have become closer to daily necessities. Thus, a large number of buyers can be seen purchasing these regularly from pharmacies. 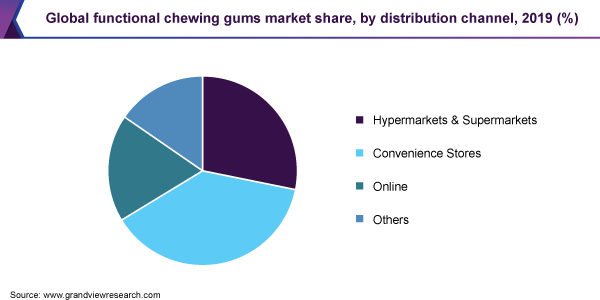 The online segment is expected to register the fastest CAGR of 10.0% from 2020 to 2027. The functional chewing gums have been evolving as a replacement for many other generic medicines. As their absorption is more accessible and efficient than most conventional drugs, these have been gaining traction among the millennials, a mobile dependent generation. Thus, most e-commerce channels can be seen selling functional chewing gums. Furthermore, their extensive collection of a variety of products is driving online sales.

North America held the largest revenue share of over 35.0% in 2019. The region has been witnessing several strategic movements from the manufacturers of functional chewing gums to leverage the boom in the market growth. For instance, in September 2019, Hemptown USA launched a chewing gum that contains 15 milligrams of cannabidiol and 5 grams of cannabigerol. These compounds are quickly absorbed by the body post-consumption and offer instant relaxation. These chewing gums are mint flavored. They are packed in foils that maximize the freshness and create a suitable solution for dispensing too.

Asia Pacific is expected to emerge as the fastest-growing regional market at a CAGR of 10.1% from 2020 to 2027. A similar situation can be noticed in the Asia Pacific, where manufacturers have been going to great lengths to earn customer loyalty. In August 2020, Tauriga Sciences, Inc., which has been actively manufacturing a wide range of functional “supplement” chewing gums, obtained HALAL certification under the supervision of Etimad Halal Certification for its flagship brand, Tauri-Gum. South East Asia is a vast market for HALAL products and is expected to create a strong foundation for the Asia Pacific brand.

Major manufacturers of functional chewing gums have been applying various marketing strategies. In December 2019, Mars Wrigley, along with Behavior Change, a social enterprise, launched a free digital toolkit to reduce gum littering and contribute to product life cycle management. These products are available in nine different designs and include slogans, such as ‘Don’t drop gum’ and ‘Time to Bin Your Gum”. These posters also point out the number of bins in the area. The Waste and Resources Action Program (WRAP) of the company aims to control the pre-empting littering and encourage bin use.

Similarly, in July 2020, Trident Gum, along with T-Pain, launched a contest named, #ChewTunes, where the fans are invited to create an original beat via augmented reality (AR) filter around the brand’s new limited-edition Chew Tunes packs. Such strategies are expected to increase brand penetration among consumers. Some prominent players in the global functional chewing gums market are:

This report forecasts revenue growth at the global, regional, and country levels and provides an analysis of the latest industry trends and opportunities in each of the sub-segments from 2016 to 2027. For the purpose of this study, Grand View Research has segmented the global functional chewing gums market report on the basis of product, distribution channel, and region:

How big is the functional chewing gums market?

What is the functional chewing gums market growth?

Who are the key players in the functional chewing gums market?

What are the factors driving the functional chewing gums market?