The global chitosan market size was valued at USD 6.8 billion in 2019 and is expected to expand at a revenue-based CAGR of 24.7% between 2020 and 2027. The growing product application in water treatment, pharmaceutical and biomedical, cosmetics, and food and beverage industries are expected to drive the market growth.

Chitosan is an amino polysaccharide polymer commercially produced from the shells of crab, lobster, shrimp, and crayfish. It is made through chemical or enzymatic deacetylation of chitin shells or exoskeletons of insects, crustaceans, and the cell walls of fungi with an alkaline substance such as sodium hydroxide. Each raw material for the product has different chitosan content hence play an important role in commercial manufacturing. Shrimp is considered to be the major source for chitosan since it contains about 25% to 40% chitin, whereas, the crab shell contains approximately 15% to 20%.

Rising product demand from the cosmetics industry and increasing scope of product application in waste-water treatment is also anticipated to boost the market growth. Moreover, the elimination of stringent regulations that restricted the establishment of new manufacturing units by the Government of Mexico has resulted in the development of new and large-scale pharmaceutical manufacturing facilities in the region. 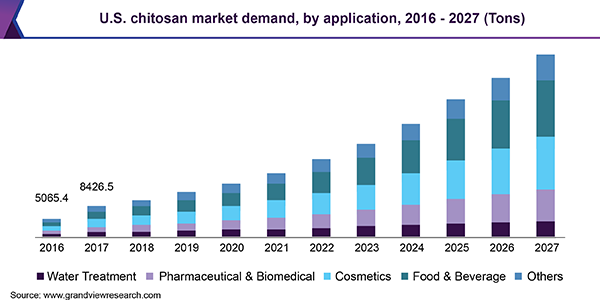 This strategy has played an important role in driving domestic pharma industry growth, which is likely to fuel product demand over the next few years. However, high product costs depending on the quality and purity are expected to hamper the market growth.

One of the key factors steering chitosan demand is the easy availability of its raw material, obtained as a waste product from the fishery industry. Fishing is one of the most important businesses for people in the Asia Pacific. According to the Food and Agriculture Organization of the United Nations, China has emerged as one of the major players in the global shrimp market. During the first half of 2019, the country imported 285,900 tons of shrimp mainly from Ecuador, India, and Saudi Arabia, which was 186% more compared to 100,000 tons imported in 2018.

Based on the application trends, the chitosan market has been segmented into water treatment, pharmaceutical and biomedical, cosmetics, food and beverage, and others. Among these water treatments were the largest application segment, owing to its growing demand from industrial, commercial, and municipal waste treatment plants. Its superb ability to remove pesticides, surfactants, phenol, and polychlorinated biphenyls from wastewater find application as flocculating, coagulating, and a chelating agent in their purification.

Another significant application includes use as an antimicrobial agent in food processing and its packaging industries. It acts as a fungicide, offers freshness and health benefits when mixed with dietary supplements. In addition, its ability to enhance immunity, reduce blood sugar, and decrease blood pressure are expected to be key factors driving the demand in the food and beverage industry.

Asia Pacific emerged as the largest regional market in 2019. It is also expected to be the fastest-growing region owing to the rapid development of end-use industries in Japan, China, India, and South Korea. Increasing demand for biobased products coupled with supporting government scenario in these counties is expected to drive the regional demand for chitosan. For instance, according to the Korea Food & Drug Administration, products such as chitooligosaccharides and glucosamine are considered safe for use in dietary supplements. Similarly, in Japan, it is filed on the food additives list given by The Japan Food Chemical Research Foundation.

In Asia Pacific, Japan has been one of the major producers as well as consumers of chitosan owing to the presence of abundant raw material coupled with early recognition of the benefits offered by the product. The demand in Japan is primarily driven by water treatment applications which account for over 60% of the total market share. Increasing demand from manufacturing artificial skin and in wound dressing is also expected to positively impact the growth over the forecast period. 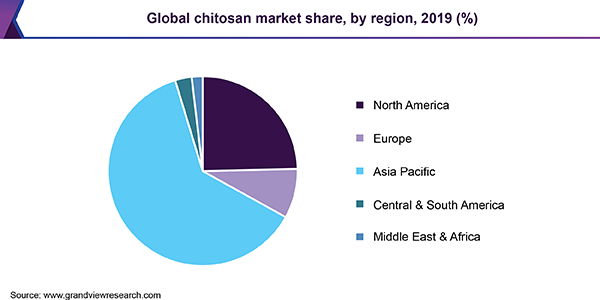 In Europe, the growing number of food processing industries has led to the large import of chitosan. The European Parliament regulation (EC) No 1107/2009, approves chitosan hydrochloride as a basic substance used in the dietary supplement additives. In addition, increasing R&D expenditure in the pharmaceutical industry, growing popularity for natural cosmetics products are expected to propel the demand over the forecast period.

The major business players in the industry invest in cost-effective and safer production methodologies. Market leaders are also trying to expand their product portfolio by focusing on developing a wide range of chitosan products, based on their purity levels, which can be suitable according to applications of end-use industries. The majority of key companies are located near the coastal areas across the world, in order to get easy access to the raw materials.

This report forecasts revenue growth at a regional & country level and provides an analysis of the industry trends in each of the sub-segments from 2016 to 2027. For the purpose of this study, Grand View Research has segmented the global chitosan market report on the basis of application and region:

What is chitosan market growth?

Which segment accounted for the largest chitosan market share?

b. Asia Pacific dominated the chitosan market with a share of 62.1% in 2019. This is attributable to the rapid development of end-use industries in Japan, China, India, and South Korea.

Who are the key players in the chitosan market?

What are the factors driving the chitosan market?

b. Key factors that are driving the chitosan market growth include increasing demand from the cosmetics industry and rising scope of usage in waste-water treatment industry.

How big is the chitosan market?