Global oil & gas separation equipment market size was USD 6,386.1 million in 2014. Growing petroleum industry particularly in the Middle East & Africa and North America is anticipated to drive the market over the forecast period.Increasing E&P activities in the U.S., Indonesia, Venezuela, China, Nigeria, and Canada has been the major factor contributing to increased separation techniques requirement over the past few years.

Most of the fluids extracted from these reserves require onsite treatment and pre-processing before sending to offsite processing facilities and refineries for effective transportation. Increasing onsite processing requirements along with large unexplored hydrocarbon reserves in regions such as North Sea and Gulf of Mexico are expected to drive processing industry, which in turn is expected to fuel equipment demand over the forecast period. 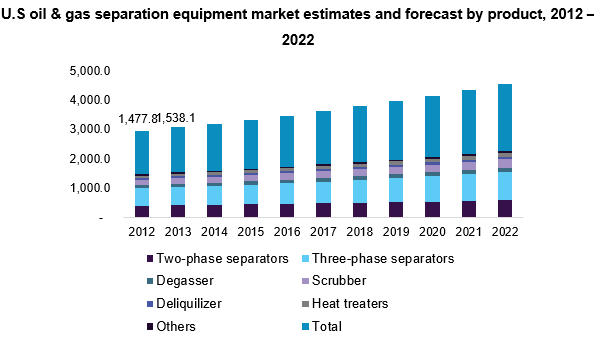 Increasing E&P in deep sea and ultra deep sea coupled with high yield from unconventional hydrocarbon reserves such as tight gas, shale, and CBM has increased oil and gas production. Owing to unique dynamics of oil & gas fields, specific separation techniques and equipment are required. Growing environmental concerns coupled with increasing government regulations to maintain optimum levels of oil in water and water in oil for pipeline grades have led to standardization of separation levels. This in turn has bolstered oil & gas separation equipment demand.

Stringent regulations regarding disposal and reuse of produced water for several applications have mandated onsite processing of formation fluids. Increasing TDS content in produced water may further impose serious environment impacts. Hence there is a growing liability of oil & gas producers to judiciously treat formation fluids before disposing or reusing the waste stream. This is expected to bolster market growth over the forecast period.

Three-phase separator was the largest product segment and accounted for over 40.8% of the total demand in 2014. This separation equipment has added advantages over two-phase separators in terms of optimum pressure and liquid sealing. Increasing production in associated oil & gas wells coupled with high priority for produced water treatment is estimated to drive three-phase separators demand over the forecast period. 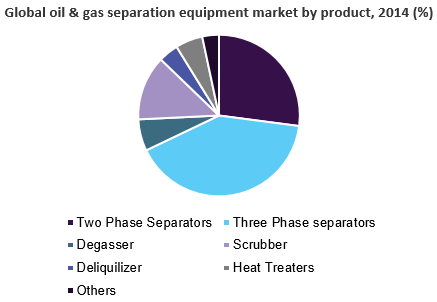 Two-phase separator is anticipated to witness average growth in terms of demand over the forecast period. These separators are installed at oil field to separate the well fluids into gas and total liquids. These equipment are generally used for primary treatment of formation fluids mainly in onsite facilities mainly for high gas to oil ratio (GOR) reservoir characteristics.

Scrubber is expected to witness rapid growth in terms of demand over the forecast period. Scrubber is typically used in upstream of gas treating equipment that contains dry desiccants or mechanical equipment such as compressors. It removes traces of liquid droplets from gas streams to protect downstream equipment from damage and failure. It is also used as downstream equipment for gas condensed liquids. Stringent government norms for maintaining flare gas quality and maximum suspended particulate matter content in pipeline fluids is estimated to positively impact market expansion over the next few years

North America dominated the global industry in 2014 and is expected to remain the largest regional market over the forecast period. North America oil & gas industry is characterized by heavy capitalization of assets in both onshore and offshore reserves. Rising shale plays and coal bed methane production in the region is anticipated to bolster equipment demand over the forecast period. Increasing offshore E&P along with new explorations in Baken oilfields is expected to fuel market growth over the next few years.

Asia Pacific is anticipated to witness the highest growth over the foreseeable future owing to rising E&P activities in countries such as China, Indonesia, Taiwan, Malaysia, Vietnam and India. These activities are expected to bolster product demand over the next seven years. Increasing government initiatives to exploit hydrocarbon reserves sustainably by providing financial aid in terms of FDI and tax benefits particularly in China and India is anticipated to drive market penetration in these regions over the next few years. Large unexplored hydrocarbon reserves along with discovery of shale reserves in China are projected to fuel oil and gas separation equipment market over the forecast period.

Europe is expected to witness moderate growth rates in near future on account of stringent regulatory scenario in the region regarding air quality and processed stream quality. Major oil and gas production is centered in Norway, UK, and Russia. Latin America is anticipated to project significant growth over the forecast period owing to surging processing equipment requirement particularly in petroleum rich economies including Venezuela, Brazil and Argentina.

The industry is moderately fragmented with presence of several local and small-scale participants. Major companies are increasing their product offerings and investing heavily on R&D for developing multi-functionality equipment with high complexity to handle a wide assortment of fluids. This is anticipated to enhance their industry preference and hence increase their market share over the foreseeable future

This report forecasts revenue growth at global, regional & country levels and provides an analysis on the latest trends in each of the sub-segments from 2012 to 2020. For the purpose of this study, Grand View Research has segmented the Oil & Gas Separation Equipment market on the basis of source, application and region: