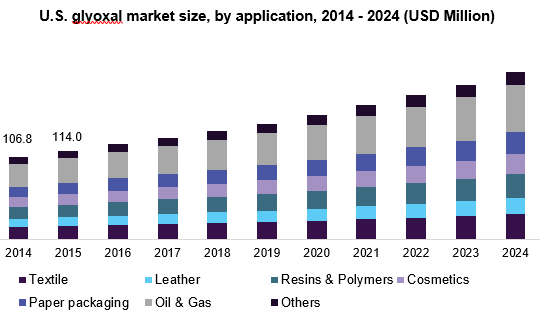 The chemical is extensively used in food packaging & paper manufacturing applications owing to its low moisture retention characteristic. The shift in the trend toward consuming packaged food owing to fast-paced lifestyles is expected to positively impact demand in the future. In the textile industry, its application includes usage as a cross-linking agent linked with cellulose in order to avoid cellulosic swelling. This leads to enhanced production resulting in soft & wrinkle-free textiles.

Growth dynamics of the industry are expected to be heavily influenced by the trends in the oil & gas industry. Huge investments made by the oil & gas companies in E&P activities, particularly in the countries of the Middle East & Africa such as Nigeria and South Africa are touted to drive demand. The key function of glyoxal is oil recovery and gas sweetening, both of which play an essential role in making both the oil and gas modifiable and usable as per the requirements of end-use.

According to OECD guidelines 301C-E & 303A, glyoxal is considered to be an environment-friendly due to its biodegradable nature, exhibiting over 90% dissolved organic carbon content decrease. It is used as a resistance agent in printing with reactive dyes and as a leveling agent in dyeing polyamide with acid dyes. Such an extensive application field has created growth avenues for market participants in terms of innovation.

At the global level, Asia Pacific is considered to offer immense growth opportunities to the industry. Factors such as rapid industrialization and urbanization are expected to drive demand in the region. The industrialization has resulted in a growing number of manufacturing activities in the region while urbanization has created the need for enhanced public services such as sanitation. The chemical is used in large amounts for various industrial uses such as fillers, intermediates, odor agents, processing aids, and solids separation agents. In terms of consumer use, it is heavily used in water treatment products.

Oil & gas is the major application sector and accounted for 30.4% of the overall volume in 2015. Glyoxal is widely used as a cross-linker for oil recovery, and sulfur scavenger in gas sweetening processes. The recent crash in crude oil prices owing to shale gas discoveries in North America has led to higher oil refining activities in the region. Advanced economies such as the U.S. and Canada are likely to dominate the market for glyoxal applications in this field. Additionally, rising energy needs in emerging economies have led to a high demand for processed oil products in various end-use industries across China, India, Thailand, Vietnam, South Korea, and other Southeast Asian countries

Resins & polymers, which accounted for 16.7% of the overall volume in 2015, and is expected to command a greater share by 2024. The chemical finds application as a cross-linking agent in various polymerization processes. The chemical is gaining importance in cross-linking and masking nucleophiles such as sulfites, amides, amino groups, and hydroxy groups.

Glyoxal is widely utilized as a crosslinking agent or building block for textiles in order to facilitate softer and less wrinkled clothes. The product is increasingly being utilized across emerging textile industries in Asia Pacific on account of its biodegradable and sustainable nature. Glyoxal displays significant potential as a substitute for aldehydes and is likely to gain a higher market share owing to advantageous product characteristics over the coming years.

The global paper packaging market has received an impetus in recent years owing to the increasing problems of land-fill and non-biodegradability of common plastic packaging materials. Slow degradation rates, high prices, and increasing consumption rates of individualized consumer goods are driving the substitution of plastic packaging with eco-friendlier alternatives such as paper.

Asia Pacific glyoxal market led the global industry and accounted for over 65% of the overall volume share in 2015. Rising demand from key end-use industries such as paper, textile, and oil & gas is anticipated to be a major driving factor for the region’s growth. The region is anticipated to maintain its dominance in 2024 as a result of huge demand in the cosmetic industry purposing cosmetic products that include moisturizers, sunscreen creams, and lotions.

North America is projected to grow at an estimated CAGR of 7.5% from 2016 to 2024. Increasing activity around oil & gas exploration along with strong demand from the packaged food industry is touted to drive demand in the region. Glyoxal finds wide application scope in end-use industries such as agrochemicals and pharmaceuticals and will subsequently benefit North America industry dynamics. 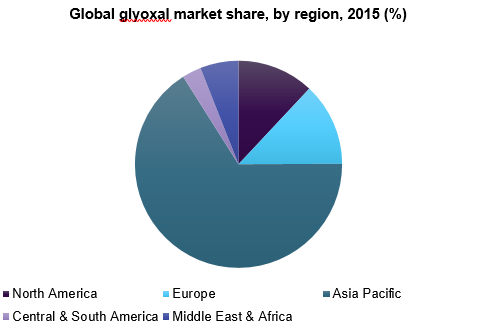 In Europe, increasing demand from end-use industries such as paper packaging, wood adhesives, and leather along with the recovery of economic growth is anticipated to drive market growth in the region over the forecast period. Increasing glyoxal usage in the production of glycolic acid which serves as an intermediate for agrochemicals, antibiotics, vanillin, and allantoin is another key driving factor for regional market growth.

In the Middle East & Africa, exponential growth in the construction industry is anticipated to witness a growing demand for Glyoxal in this region. In addition, Central & South America is projected to a sluggish growth over the coming years due to rising domestic prices and lower consumer spending.

There exists a high-level integration from corporations such as BASF and ME Global B.V., as they are involved in raw material production along with a strong distribution network, making them completely integrated across the value chain.

How big is the global glyoxal market?

What is the global glyoxal market growth?

Which segment accounted for the largest global glyoxal market share?

b. Asia Pacific dominated the glyoxal market with a share of 66.5% in 2019. This is attributable to rising demand from key end-use industries such as paper, textile and oil & gas.

Who are the key players in global glyoxal market?

What are the factors driving the global glyoxal market?

b. Key factors that are driving the market growth include growing end-use industries such as oil & gas, textile, and paper packaging, particularly in emerging economies of Middle East & Africa and Asia Pacific.