The global gout therapeutics market size was valued at USD 1.8 billion in 2015 and is projected to grow at a CAGR of around 16 % over the forecast period. This high growth is attributed to the introduction of various drugs and increasing adoption of biologics & regenerative drugs for the treatment.

Biologics such as Krystexxa, Canakinumab, and Rilonacept have been introduced in the market. Increasing adoption of these biologics because of their ability to produce powerful anti-inflammatory action is likely to drive the market during the forecast period. Furthermore, several other drugs that are in clinical trials currently are expected to be launched during the forecast period, and are likely to propel the industry.

Rising prevalence of gout across the globe due to changing lifestyle is likely to boost the industry over the coming years. Increasing alcohol consumption, high purine diet, rising obesity & kidney diseases amongst people, and consumption of certain medications such as diuretics are likely to further boost the incidence of gout.

Nonsteroidal Anti-inflammatory Drugs (NSAIDs) dominated the industry in 2015. This is attributed to the high level of penetration of drugs, availability at lower cost in comparison to drugs of other classes, and the ability to relieve pain in case of acute gout attack.

Corticosteroids are generally used for patients who are intolerant to colchicine or NSAIDs. Furthermore, rebound gout attacks after the withdrawal of the steroids are common and may restrain the corticosteroids segment.

Colchicine accounted for a significant share of the industry due to the ability to inhibit acute inflammatory response by restraining neutrophil adhesion, chemotaxis, and motility. In 2009, Colcrys (colchicine) was approved by the U. S. FDA for the treatment of gout and Familial Mediterranean Fever.

NSAIDs, corticosteroids, and colchicine are majorly used to treat acute gout. Although the penetration of these drugs is higher, low cost as compared to urate-lowering agents and low treatment adherence are the key reasons for lower share in the market. 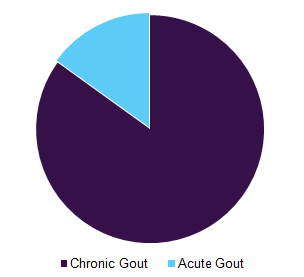 North America accounted for the largest share of all the regions in 2015. This is attributed to local presence of key players, wide use of gout therapy, and high cost of branded pharmaceuticals in the U.S. The region is expected to maintain its dominance during the forecast period due to the expected launch of urate-lowering agents in the region.

Asia Pacific is expected to observe the fastest growth over the coming years due to rising patient pool, increasing investment by major players in the region, and rising adoption of gout therapy. Furthermore, increasing smoking prevalence & alcohol consumption and stressed lifestyle are likely to boost the incidence of gout during the forecast period.

Several regional and multinational players are operating in the market. First-line treatment for acute and chronic gout is dominated by generic drugs.

Collaborations and acquisitions of well-established players in the market and development of innovative products are the key strategies adopted by the market players in the region. For instance, in December 2015, Horizon Pharma plc acquired Crealta Holdings LLC, with a strategic motive to expand its orphan business segment and boost rheumatology expertise & infrastructure.

In April 2016, AstraZeneca signed a licensing agreement with Ironwood Pharmaceuticals, which granted the latter exclusive rights of Zurampic (lesinurad) for the U. S. The agreement is expected to ensure successful promotion of Zurampic in the U. S.

This report forecasts revenue growth and provides an analysis of the latest trends in each of the sub-segments from 2014 to 2025. For the purpose of this study, Grand View Research has segmented the gout therapeutics market on the basis of drug class, disease condition, and region: