The global green hydrogen market size was valued at USD 3.2 billion in 2021 and is expected to expand at a compound annual growth rate (CAGR) of 39.5% from 2022 to 2030. Green hydrogen is produced by the electrolysis of water for which electric power is utilized which is generated by renewable energy sources such as wind energy or solar energy. The presence of favorable government policies pushing toward the hydrogen economy along with growing environmental concerns regarding increasing carbon emissions from fossil fuel usage are expected to drive the demand for the hydrogen economy. This trend is anticipated to provide a potential growth landscape for the industry. 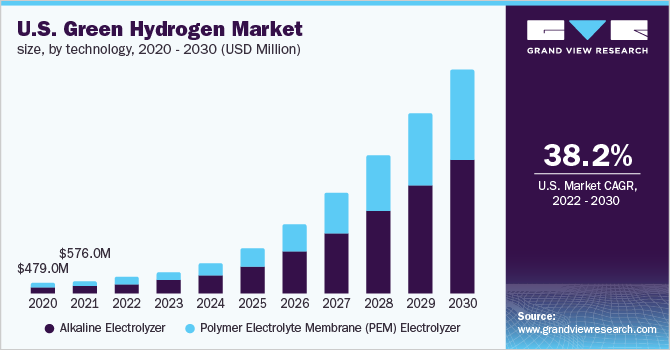 The U.S. is among the early adopters of clean energy solutions in the world for sectors such as power generation and transportation. This can be attributed to the increased importance given to clean energy solutions as per the energy act introduced by the U.S. government. The Roadmap to a U.S. Hydrogen Economy report forecasts that hydrogen from low-carbon sources could supply roughly 14 percent of the country’s energy needs by 2050, including hard-to-electrify sectors now dependent on natural gas such as high-heat industrial processes and manufacturing fertilizer.

In October 2019, Air Liquide announced to invest USD 150 million into a renewable liquid hydrogen generation plant in Nevada set to generate 30 tons per day, or enough to supply 40,000 fuel cell vehicles, when it starts operation in 2022.

PEM electrolyzers are expected to witness a higher growth rate over the forecast period. The presence of solid specialty plastic material-based electrolytes offers higher functional flexibility to the PEM electrolyzer as compared to the alkaline counterpart. The substantial growth can be attributed to high proton conductivity, lower gas permeability, and lower thickness of proton exchange membranes.

The pipeline segment accounted for 62.07% revenue share of the green hydrogen market in 2021. Green hydrogen can be transported as a gas in high-pressure containers, as a liquid in thermally insulated containers, in processed form as methanol or ammonia, or in a chemical carrier medium.

However, a pipeline is the most economically viable method to transport large volumes over long distances. In September 2020, German pipeline operators Nowega and Gascade and Siemens Energy released a white paper jointly studying the practical aspects of converting natural gas pipelines for future hydrogen transportation.

Hydrogen can be transported through trucks and ships other than pipelines using different carriers. The mode of transportation and the carrier used depends on the targeted end-user application and the terrain to be covered and the distance to be covered. The carriers that are used are Liquid organic hydrogen carriers and ammonia through liquid hydrogen.

Liquid hydrogen is the most efficient method if the end-use requires liquid or high-purity hydrogen, and is the most suitable method of transportation through trucks after landing at port. However, it has low volumetric energy density compared with ammonia and incurs boil-off losses during everyday storage.

But burning hydrogen in internal combustion engines results in nitrogen oxide emissions and is less efficient than being used in fuel cells. In 2020, major European automotive companies like CNH, Daimler, DAF, Ford, MAN, Scania, and Volvo announced plans to switch their truck fleets to hydrogen power by 2040. Also, Airbus is designing hydrogen-powered aircraft and is planning to run commercial flights by 2035.

Hydrogen is one of the major options for storing renewable energy in power generation. In power plants, gas turbines can be run using hydrogen and ammonia to increase power system flexibility. In coal-fired power plants, ammonia can be used to reduce emissions. In the United States, the use of hydrogen as a power plant fuel is growing.

Several power plants have announced plans to operate on a natural gas-hydrogen fuel mixture in combustion gas turbines. For example, the Long Ridge Energy Generation Project facility (485 MW) in Ohio has been using a gas-fired combustion turbine that runs on a 95% natural gas/5% hydrogen fuel blend to use 100% green hydrogen eventually. 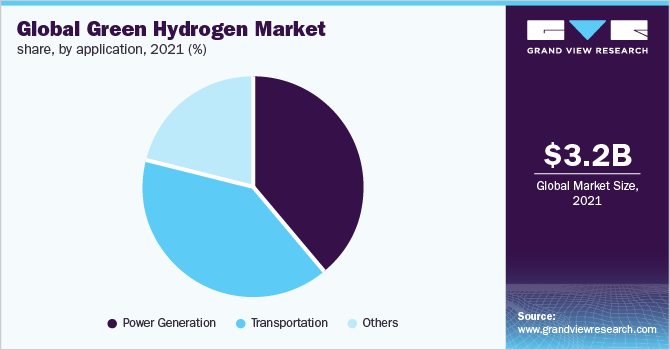 Europe accounted for a significant revenue share of about 50% in 2021 owing to the massive investments made by the European economies, aiming for an energy transition into a clean hydrogen-based economy over the coming years. For instance, in August 2019, the U.K. government announced a USD 14.8 billion investment plan for a project that is expected to use 4 GW of offshore wind for green hydrogen production by 2030.

North America is anticipated to attain a prominent CAGR over the forecast period, with U.S. and Canada gradually enhancing the green hydrogen industry owing to the implementation of clean energy policies. In the U.S., California holds the majority market share with the growth driven by aggressive de-carbonization targets such as phasing out of gas- or diesel-powered public buses by 2040. 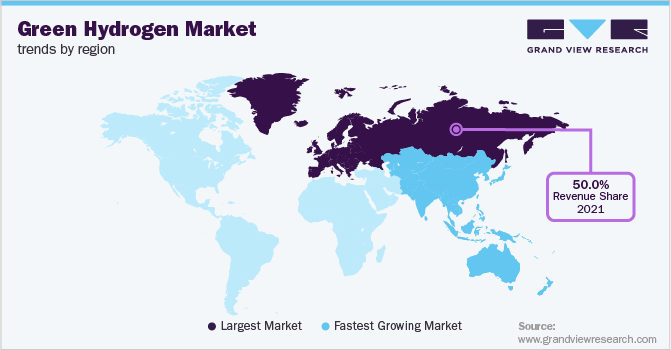 In Canada, Air Liquide is building a large-scale PEM electrolyzer with a 20 MW capacity which will generate green hydrogen using hydropower. This sort of development along with projects under pipeline in Canada will significantly aid the growth of the green hydrogen industry in the country in the foreseeable future.

Asia Pacific is expected to grow at the highest CAGR over the forecast period, with Australia and Japan being the largest contributors to the regional growth.  For instance, Toshiba in Japan is constructing a green hydrogen plant with a 10 MW electrolyzer capacity which would be utilized to provide hydrogen for transportation applications.

Key participants in the industry are focusing on technological advancements and innovation to minimize the cost of renewable-powered electrolysis and largely commercialize the production of green hydrogen. In addition, industry players are practicing several strategic initiatives to expand their foothold in the green hydrogen market over the coming years.

For instance, in April 2020, two Germany-based companies Siemens Gas and Power and Uniper SE announced a joint agreement on implementing projects that produce and use green hydrogen from renewable energy sources. Such strategies are expected to enable the commercialization of green hydrogen as an alternative to fossil fuels. Some prominent players operating in the global green hydrogen market include:

This report forecasts volume and revenue growth at global, regional, and country levels and provides an analysis of the latest industry trends in each of the sub-segments from 2019 to 2030. Forthis study, Grand View Research has segmented the global green hydrogen market report based on technology, application, distribution channel, and region: 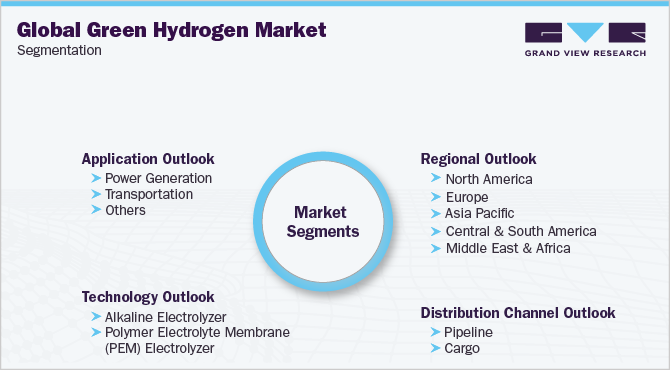 How big is the green hydrogen market?

What is the green hydrogen market growth?

Which segment accounted for the largest green hydrogen market share?

b. Alkaline electrolyzer was the largest segment accounting for 67.91% of the total revenue in 2021 owing to low cost as compared to PEM electrolyzer.

Who are the key players in the green hydrogen market?

What are the factors driving the green hydrogen market?

b. Key factors driving the growth of the green hydrogen market include a rise in environmental concerns to curb carbon emissions and to switch to cleaner fuels to attain sustainable development.