The global gum rosin market size was USD 1.57 Billion in 2015 and is expected to witness growth at a CAGR of 3.3% over the forecast period. Gum rosin is one of the forms of rosin resins derived from pine oleoresin. The growing requirement for superior quality intermediates in automotive and building & construction industries, in the form of adhesives, coatings, and rubber, can be regarded as a major factor impacting the industry growth.

The market is expected to grow at a considerable rate over the coming years owing to increasing demand from key application industries such as adhesives, printing inks, and synthetic rubber. Gum rosin is extensively used as a binder in adhesives, and as softeners in the synthetic rubber industry. Owing to the high significance of these applications of the product, the rapid growth projected for the adhesive and synthetic rubber industries is expected to drive the industry growth during the forecast period.

Factors such as economic growth, industrial growth, rising consumer disposable incomes, and standards of living have levied high pressure on the automotive and building & construction industries for higher output and better quality products. This led to the increasing procurement of gum rosin by players of the aforementioned end-use industries over the past few years. This growth trend is expected to continue through the forecast period. Countries such as Brazil, China, and India are expected to among the key countries driving the industry growth during the coming years. 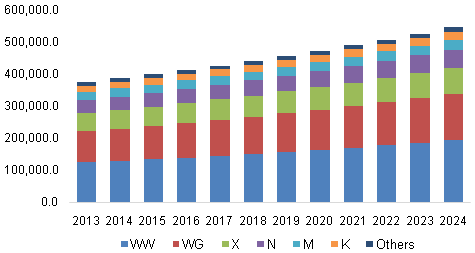 The product is extracted from pine oleoresin, which is tapped from pine trees. Industry participants are engaged in extensive R&D for efficient tapping methods and development of genetic changes that would increase the glow of resins in the trees. These measures are being continuously adopted by several players for increasing the overall product output to cater to the steadily-growing demand. However, volatile commodity and raw material prices have resulted in the large-scale market exit of Chinese players (China being the largest producer of gum rosin, globally) and barriers to entry. This may restrain the overall market growth over the coming years.

WW was the largest gum rosin product grade segment in 2015, accounting for nearly 33% of the global market. The high share was attributed to the superior quality and workability of the product for core applications such as adhesives and synthetic rubber.

Also, the WW segment is expected to be the fastest-growing product segment, projected to grow at a CAGR of nearly 6% from 2016 to 2024, in terms of revenue. The increasing requirement of superior quality binding materials in the adhesives segment is expected to the primary factor driving demand for this segment.

The WW and WG grades are available in light yellow color shades, which are key to maintaining the color and texture of the end-use products, such as adhesives, inks, rubber, and paper sizing. The WG grade also accounted for a major share of the consumption in 2015. The growing number of manufacturers in Brazil and Indonesia is expected to further drive the growth of these market segments during the forecast period.

Significant R&D investments are being made by several market participants to enhance tapping procedures for higher extraction output of gum rosin. Also, research activities are underway to introduce genetic modifications in pine trees, which would increase the flow of resins in the trees.

Such technological advancements and innovations are expected to enable the production of higher quality gum rosin products in the coming years, thereby projecting high growth for the overall market during the forecast period.

China was the largest producer as well as consumer of gum rosin in 2015, accounted for over 45% of global volume. This can be attributed to the rapid growth of application industries such as adhesives, printing inks, synthetic rubber, and paper sizing in the country.

Rest of the World, comprising emerging countries such as Brazil, India, Indonesia, and South Korea, is expected to be a major market for gum rosin over the coming years, projected to grow at a CAGR of over 5% from 2016 to 2024. Rapid industrial growth and improving lifestyles of consumers in these countries have led to an increasing demand for superior quality products from end-use industries, namely, automotive and building & construction. This can be regarded as major factors driving the demand for gum rosin in these countries.

The industry has become highly fragmented since 2013-2014, owing to the entry of several Brazilian and Indonesian manufacturers in the global market. The key players in the market are Celulose Irani SA (Brazil), Wuzhou Pine Chemicals (China), Forestar Chem (China), and CV. Indonesia Pinus (Indonesia).