The global gynecological devices market size was valued at USD 8.54 billion in 2021 and is anticipated to grow at a compound annual growth rate (CAGR) of 8.62% over the forecast period. The advancement in the gynecological devices that aid in improving the efficiency of the minimally invasive technique for surgeries and the development of advanced imaging devices, such as 3D endoscopes, are expected to drive the growth of the industry. For instance, in July 2021, the first gynecological procedure was performed in Panama with the aid of the Hugo Robotic-Assisted Surgery (RAS) system developed by Medtronic Plc. 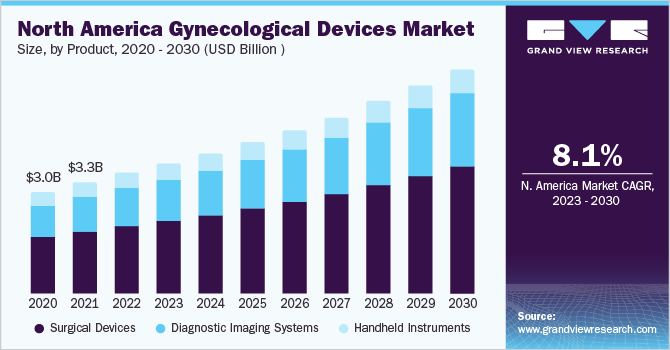 The growing prevalence of gynecological disorders is expected to propel the market growth during the forecast period. Endometriosis, Polycystic Ovary Syndrome (PCOS), adenomyosis, and uterine fibroids are the most common conditions. According to an article published in the Frontiers Journal in 2021, PCOS population-based pool prevalence is around 5 to 9% globally. Hence, the growing prevalence of these conditions is leading to a rising number of regular check-ups and surgical procedures. For instance, as per the Office on Women's Health (OWH), in the U.S., around 500,000 women opt for hysterectomy, which is the second-most common surgery performed among females.

Moreover, the increasing volume of surgical procedures, such as female sterilization, ablation, endoscopy, and laparoscopy, and increasing usage of disposable products are expected to boost the product demand. The rising adoption of advanced and innovative technologies is also expected to propel industry growth. For instance, in March 2022, Endoluxe, a California-based company, launched Endoluxe eVS, HD wireless endoscopic camera equipped with TowerTech for gynecological, urological, ENT, orthopedics, and general surgery. The market is highly regulated to enhance and ensure the safety of the devices. For instance, gynecological devices are classified under classes I, II, and III by the U.S. FDA.

The Asia Pacific Association for Gynecologic Endoscopy and Minimally Invasive Therapy regulates the use of endoscopic devices for gynecology in the Asia Pacific region. A rise in the number of unintended pregnancies during the pandemic resulted in unsafe abortions or some gynecological conditions. This has led to an increase in gynecological surgical volumes globally. According to the United Nations, around 60% of pregnancies globally are unintended and around 45% of unintended pregnancies lead to unsafe abortion.

Based on products, the industry has been segmented into surgical devices, gynecological imaging devices, and handheld instruments. The surgical devices segment dominated the industry in 2021 and accounted for the largest share of 49.75% of the global revenue. High usage of female contraceptives and endoscopic devices is anticipated to support the dominance of the segment throughout the forecast period. For instance, CooperSurgical reported a 26% increase in net sales for office and surgical products used by obstetricians/gynecologists in the hospitals. Moreover, the demand for easily autoclavable and highly durable surgical instruments has been rising due to the increasing surgical procedure volumes globally.

Rising awareness regarding birth control devices and surgeries is also estimated to boost segment growth. In addition, the growing number of female sterilization procedures is playing a vital role in the development of the market. As per the Contraceptive Use by Method 2019, by United Nations, around 842 million women among 1.9 million women of reproductive age use modern methods of contraception globally. Approximately 11.5% and 8.4% of women of reproductive age use female sterilization and Intrauterine Devices (IUDs), respectively as contraceptive methods, which is highest among other contraceptives.

The diagnostic imaging systems segment is expected to witness a lucrative CAGR during the forecast period. The growth can be attributed to the rising number of intended and unintended pregnancies globally. As per the United Nations Population Fund, around 121 million pregnancies each year are unintended, which accounts for approximately 50% of overall pregnancies globally. The imaging systems, such as ultrasound, Computed Tomography (CT), Magnetic Resonance Imaging (MRI), and plain radiography, are utilized to investigate and determine potential harmful conditions in the pregnancy.

On the basis of end-uses, the global industry has been further segmented into hospitals & clinics and Ambulatory Surgery Centers (ASCs). The hospitals & clinics segment dominated the industry in 2021 and accounted for the largest share of more than 64.85% of the overall revenue. The high share is mainly attributed to the increased demand for gynecological surgeries and the adoption of innovative technologies in hospitals & clinics. Advanced technologies are feasible surgical options and offer a better experience. For instance, in January 2022, The Women’s Hospital at Jackson Memorial, HCA Florida Healthcare’s Kendall Regional Medical Center, and AdventHealth Celebration started using the Hominis Surgical System, robotic surgical technology by Memic Innovative Surgery for gynecological procedures. 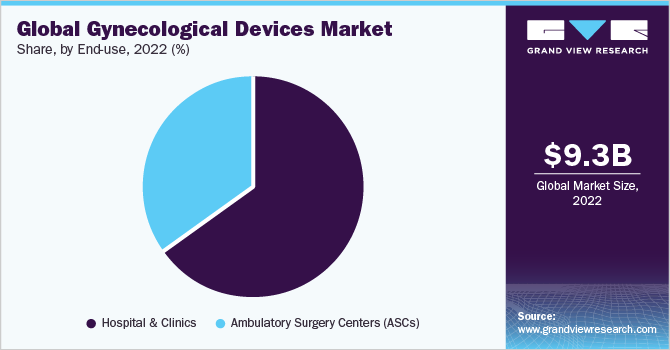 The device provides minimally-invasive treatment options for gynecological surgeries and is U.S. FDA-authorized. The ASC end-use segment is projected to register the fastest growth rate during the forecast period. The growth of the segment can be attributed to the more affordable nature of these centers compared to other healthcare settings, such as hospitals and clinics. As per the Nationwide Ambulatory Surgery Sample (NASS) database, gynecological surgeries, such as hysterectomy, laparoscopic surgeries, oophorectomy, and others, were among the most common major ambulatory surgeries performed in younger females in the U.S. Around 419,000 major gynecological ambulatory surgeries were performed in the U.S. in 2019.

North America dominated the global industry in 2021 and accounted for the maximum share of more than 38.65% of the overall revenue. It is expected to maintain its dominance throughout the forecast period owing to the presence of a well-established healthcare infrastructure, rising levels of awareness regarding the availability of diagnostic tests & treatments, and developed reimbursement coverage. According to the statistical brief published by the Healthcare Cost and Utilization Project, in 2019, around 419,000 hysterectomy, abdominal, and vaginal ambulatory surgeries were performed in the U.S., which accounts for 2.7% of the total ambulatory surgeries in 2019. Asia Pacific, on the other hand, is expected to witness the fastest growth rate during the forecast period. 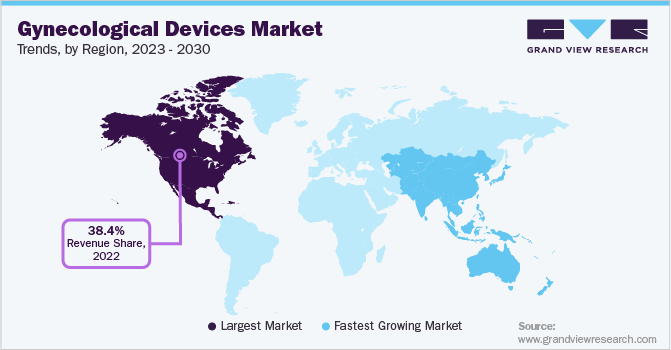 The rising awareness regarding family planning and birth control due to government initiatives to control the growing population is expected to propel the product demand in the region. According to the United Nations Population Facts, in 2019, the need for modern contraceptives among women of reproductive age was around 90.1% and this is expected to remain constant till 2030. Moreover, China is among the countries having birth control policies. The rising prevalence of gynecological disorders coupled with rising surgical procedures is expected to foster the growth of the market in the region. For instance, as per an article published in the journal of Gynecology and Pelvic Medicine, in 2019, around 13,934 gynecological surgeries were performed in the Department of Gynecology, China.

This industry is highly fragmented with the presence of several local players. Thus, major companies practice merger and acquisition strategies to sustain competition and increase industry share. For instance, in October 2021, Hologic, Inc. entered into a definitive agreement for the acquisition of Bolder Surgical, a U.S.-based surgical devices company. The acquisition will contain laparoscopic dissecting, diving, and vessel sealing devices including Bolder’s CoolSeal, the JustRight 5 mm stapler, and JustRight 3 mm vessel sealer. Some of the key players in the global gynecological devices market include:

This report forecasts revenue growth at the global, regional, and country levels and provides an analysis of the latest industry trends in each of the sub-segments from 2017 to 2030. For the purpose of this study, Grand View Research has segmented the global gynecological devices market report on the basis of product, end-use, and region: 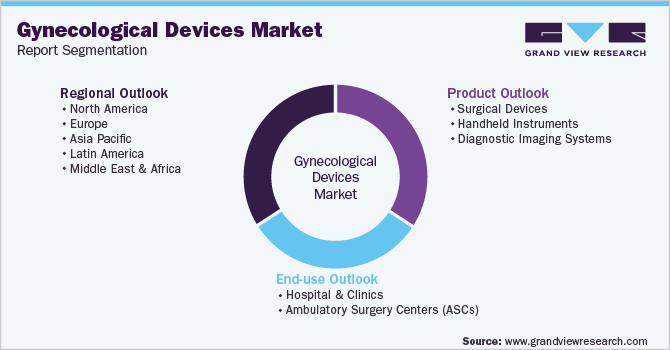 How big is the gynecological devices market?

What is the gynecological devices market growth?

Which segment accounted for the largest gynecological devices market share?

b. North America dominated the global gynecological devices market in 2021. It is expected to maintain its dominance throughout the forecast period owing to the availability of well-established healthcare infrastructure, high rate of awareness regarding the availability of diagnostic tests and treatments, and rising reimbursement coverage.

Who are the key players in the gynecological devices market?

What are the factors driving the gynecological devices market?