The global hand-held surgical instruments market size was valued at USD 3.82 billion in 2017 and is expected to exhibit a CAGR of 7.1% over the forecast period. Rising prevalence of chronic diseases such as neurological, cardiovascular, infectious, and urological diseases is expected to drive the market. 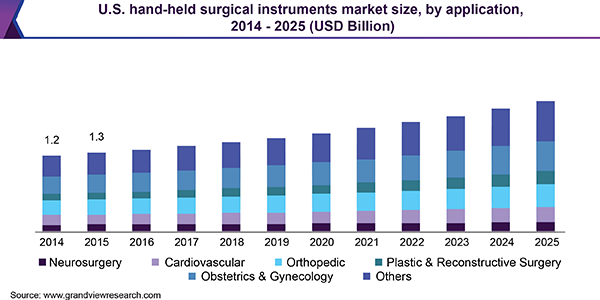 According to the World Federation of Neurology, 12 out of every 100 patients die due to neurological diseases. Cardiovascular diseases are also leading to an increase in a number of heart surgeries. For instance, coronary artery bypass grafting (CABG) is a common surgery to unblock the coronary artery. Increasing burden of these diseases has led to growth of therapies and treatments, thereby leading to rise in demand for handheld surgical instruments.

People aged 60 and above are at a high risk for diseases such as cardiovascular, orthopedic, and neurological diseases. Thus, increase in the geriatric population is expected to boost demand for handheld surgical equipment. In addition, surge in number of road accidents is a high-impact rendering factor.

Cardiovascular diseases are also leading to an increase in the number of heart surgeries. For instance, coronary artery bypass graft surgery is a common treatment solution for blocked coronary artery. B. Braun and Medtronic offer a wide range of surgical tools required in all types of cardiac surgery. For instance, titanium vascular clamps and forceps by B. Braun help in prolonged cardiac and vascular surgeries.

According to Association for Safe International Road Travel, nearly 2.35 million people are injured every year due to road accidents. Other accidents include burn-related injuries, sport injuries, trauma, and fall injuries. According to American Burn Association, burn injuries accounted for around 44% of all hospital admissions. Severe injuries mostly need surgical intervention, thus significantly contributing to the growth of handheld surgical equipment market.

According to Agency for Healthcare Research and Quality, in 2012, 14.4 million hospital visits resulted in invasive, therapeutic surgeries, of which 46.9% surgeries were performed in inpatient settings and 53.1% were performed in ambulatory settings across 28 states in the U.S. This is expected to positively influence the demand for handheld surgical instruments in the coming years.

Retractors are anticipated to show lucrative growth over the forecast period owing to technological innovations in product development. For instance, self-retaining retractors help in hands-free surgery. These retractors are available with opposable blades that use a clamp or screw to hold the tissues apart by themselves.

The hand-held surgical instruments market can be categorized on the basis of application into neurosurgery, cardiovascular, orthopedic, plastic and reconstructive surgery, obstetrics and gynecology, and others. The others segment, which includes general surgery, urologic surgery, thoracic surgery, wound closure, and microvascular surgeries, held the largest revenue share in 2017. Rise in number of general surgeries is a major factor driving segment growth.

The gynecology and obstetrics segment also significantly contributed toward revenue growth in 2017 due to increase in number of C-sections performed. Some of the common surgical procedures involving female reproductive organs are episiotomy and cervical cerclage.

Plastic surgeries are commonly performed to reconstruct some parts of the body, such as face, ears, eyes, nose, and breast. This is anticipated to lead to high market growth during the forecast period. Moreover, with growing disposable income, there is a gradual rise in number of plastic surgeries performed. This is also expected to bode well for the segment.

On the basis of end use, the market can be segmented into hospitals, clinics, ambulatory surgical centers, and others. Hospitals dominated the market in 2017 due to large number of cases and preventive surgeries being performed in these end-use settings. With increase in incidence of trauma and number of surgical procedures, such as kidney and liver transplants as well as angioplasty, demand for surgical equipment has significantly increased in hospitals. 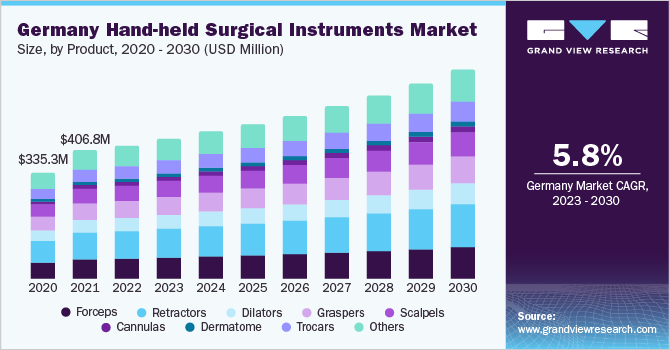 In 2017, North America dominated the market, fueled by increasing incidence of chronic diseases such as cardiovascular diseases, neurological diseases, cancer, diabetes, and autoimmune diseases. According to the World Bank, in 2015, 4,511 surgeries per 100,000 individuals were performed in U.S., a factor that has worked in favor of the regional market.

Canada has also been witnessing a surge in the prevalence of chronic diseases such as cancer, neurological, musculoskeletal, and cardiovascular diseases, thereby boosting the market significantly. Rise in the number of burn injuries, trauma cases, and surgeries are some of the other key factors propelling the market growth in the country. As per WHO, non-communicable diseases such as chronic respiratory diseases, diabetes, cancer, and cardiovascular diseases contribute to over 88% deaths in Canada. These facts are indicative of the rise in the number of surgeries being performed. Thus, these factors are anticipated to increase the demand for handheld surgical instruments, which is in turn expected to propel the market growth in the region.

According to WHO, the burden of non-communicable diseases is highest in Europe region and is expected to grow at a high rate in future. According to the European Road Safety Observatory Annual Accident Report 2017, over 1,079,720 road injuries were reported in 2015. With growing number of surgical procedures, need for surgical tools is rising in the region.

The growing geriatric population is one of the major factors driving the market in Asia Pacific. According to the National Census report of 2015, nearly 26.7% of the total population in Japan is aged 65 years and above, leading to high prevalence of chronic diseases in the country.

India has a large population, which has resulted in high number of surgeries being performed in the country. The rise in the prevalence of various chronic diseases in the country is a high impact rendering factor in the market. In addition, increase in the number of road accidents and burn injuries is also leading to a large number of surgical treatment procedures being performed in India. According to WHO, every year around 1,000,000 people are moderately or severely burnt in India.

Major companies are continuously adopting strategic initiatives such as new product development, regional expansion, and mergers and acquisitions to stay ahead of the competition. For instance, in 2017, Becton, Dickinson and Company received clearance from the U.S. FDA for a new line of customizable, 3.0mm micro-laparoscopic instruments, which offers a less invasive alternative for patients.

This report forecasts revenue growth at global, regional, and country levels and provides an analysis on latest industry trends in each of the sub-segments from 2014 to 2025. For the purpose of this study, Grand View Research has segmented the global hand-held surgical instruments market report on the basis of product, application, end use, and region: