The global high-k and ALD/CVD metal precursors market size was valued at USD 456.5 million in 2018 and is expected to register a CAGR of 8.3% over the forecast period. Growth of the market can be attributed to the low thermal stability of metal-organic composites. Extensive R&D activities by key companies are expected to improve copper metallization processes, which is anticipated to accelerate the demand for deposition of first-row metal films (conducting) and dielectric (insulating) precursors onto the microelectronic devices.

Moreover, rising need for rapidly accessing and storing data has also prompted the demand for materials with higher dielectric values. The Atomic Layer Deposition (ALD) of noble metals, such as ruthenium, rhodium, iridium, palladium, and platinum, is anticipated to be an active research area. High demand for a number of thin film materials for new industrial applications can be attributed to the rapid development of the ALD technology. All these factors are expected to drive the market over the forecast period. 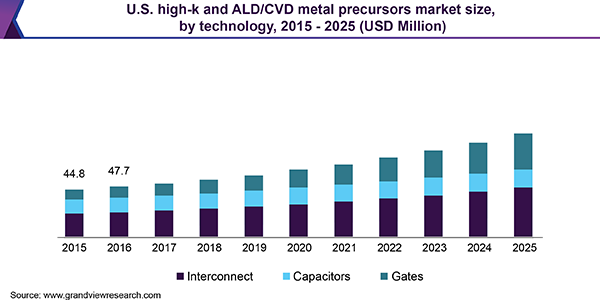 Such precursors are used for manufacturing thin metallic films. There have been considerable developments in the field of ALD owing to its application in non-semiconductor arenas and rapid growth of the semiconductor industry. Atomic layer deposition is a cutting-edge deposition method that allows ultra-thin films of a few nanometers to be deposited in a specifically controlled manner. Moreover, ALD offers remarkable deposition conformality in high-aspect-ratio structures, in addition to offering thickness control at the Angstrom level.

The selection of the right precursor is a major challenge in obtaining the desired high-k material for the next-generation scaled memory and Metal Oxide Semiconductor Field Effect Transistors (MOSFETs) devices. Such semiconductor devices require conformal thin films with high aspect ratio and low deposition temperatures. The high-temperature deposition techniques may result in complexities, such as reduced adhesion of non-uniform layers, interlayer atomic diffusion, changes in morphology, and changes in crystallinity.

Based on technology, the market is segmented into interconnect, capacitors, and gates. High-k precursors are mostly used for manufacturing gates and capacitors while metal precursors are used for producing electrode and interconnects. The gate segment is expected witness the highest CAGR of 13.1 % from 2019 to 2025. Significant research has been done on the ALD technique to produce thin films using high-k dielectric materials, such as Al2O3, Ta2O5, HfO2, and ZrO2 for DRAM, high-k gate oxides, and nitrides for electrodes and interconnects.

Interconnect is a fabrication technique that uses Copper (Cu) or Aluminum (Al) for patterning metals as well as to introduce barrier metal layers to protect the Silicon (Si) from potential damage in an Integrated Circuit (IC). High-k dielectric layers are increasingly prevalent in certain electronic components and devices, such as advanced Metal-Insulator-Metal (MIM) capacitors, DRAMs, organic thin film transistors, OLEDs, and non-volatile type of memory devices. The high-k metal gate technology is used for transistor scaling. 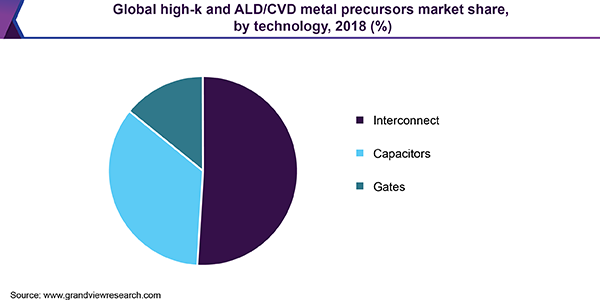 The combination of high-k dielectric and metal gate technologies offers a substantial reduction in gate leakage when transistor size is downscaled to a thickness of 1.0 nm and below. Semiconductor companies incorporate High-k Metal Gate (HKMG) stacks in the MOSFETs used in the CMOS technology to continue device scaling for up to 45 nm and below nodes. The major technology introduced by Intel includes enhanced channel strain, hafnium-based and high-k gate electric, and dual work-function metal replacement gate.

Asia Pacific regional market captured the largest market share in 2018 and was valued at USD 293.6 million. The region is expected to continue its dominance over the forecast period due to factors, such as above-average demand for electronic products in China and continued outsourcing of electronic equipment production to China. Growing demand for semiconductor devices in Brazil, Russia, India, and China (BRIC) economies, owing to the rising need for end-use electronic products with low cost, high portability, and variety, is also expected to significantly boost the regional market growth.

The key trend favoring market growth in U.S. is the increasing R&D activities in nanotechnologies used in the semiconductor industry. In addition, escalating demand for fabricating semiconductor devices, such as 3D-stacked ICs, having multifaceted architecture and produced using cost-effective and seamless manufacturing processes, such as ALD, is expected to drive the market growth in the country.

Prominent companies in this market include Air Liquide; Air Products &Chemicals, Inc.; Praxair; Merck KGaA; and Dow Chemical Company. Most of these companies are using acquisition and partnership strategies to expand their footprints in the global market. For example, in November 2015, Merck KGaA acquired Sigma-Aldrich to invest in the life science business and strengthen its portfolio of sterility testing products.

After the acquisition, SAFC Hitech business was combined with Merck’s Performance Materials business and was expected to function as part of its Integrated Circuits business unit. Beneq, an Atomic Layer Deposition equipment and thin film coating services provider, formed a strategic partnership agreement with The Centre for Process Innovation (CPI) to use the ALD technique in printed electronics applications.

This report forecasts revenue growth at global, regional, and country levels and provides an analysis of the latest industry trends in each of the sub-segments from 2015 to 2025. For the purpose of this study, Grand View Research has segmented the global high-k and ALD/CVD metal precursors market report on the basis of technology and region: