The global home beer brewing machine market size was valued at USD 12.0 million in 2018. The growing popularity of craft beer among young consumers owing to the availability of a variety of flavors, including malted barley, chestnut, and honey is a key factor driving the global market. Moreover, rising consumer preference for fresh beer coupled with the rising trend of on-premise sales is expected to further fuel the growth.

Homebrewing is witnessing an upward trend in the U.S., with residential brewers producing around 1.4 million barrels of beer in 2017. According to the American Homebrewers Association, around 1.1 million people in the U.S. brew their own beer. However, around 40% of homebrewers are hobbyists who started brewing in the last four years, indicating that this trend is still emerging. Brewing machine manufacturers have used this trend to their advantage by offering residential brewing machines. 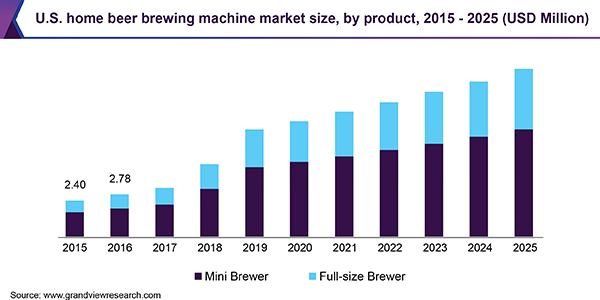 Home beer brewing machines are available in different sizes and capacities and they are easy to install, resulting in their increasing popularity. Multifunctional machines are anticipated to witness increased demand. To cater to this demand, manufacturers are engaging in R&D to offer technologically advanced products.

For instance, Electronics giant LG entered into beer market with the world’s first capsule beer brewing device for home-usage. These machines are smart, efficient, and durable, where processes such as mashing, boiling, fermenting conditioning, filtering, and packaging can be controlled by mobile apps. Moreover, they are equipped with Wi-Fi connectivity, smart touchscreen display, multiple-tap systems, and digital thermostats.

Mini brewer held the leading market share of approximately 67.1% in 2018. The increasing trend of homebrewing, especially in the U.S. is the key factor driving demand for a mini brewer from 2019 to 2025. Technological advancements coupled with increasing R&D spending are expected to promote growth.

Full-size brewer is anticipated to expand at the fastest CAGR of 14.6% from 2019 to 2025. The increasing number of breweries is mainly attributed to the growing popularity of craft beer among consumers. An increasing number of small-scale and independent brewers in the U.S., Europe, and New Zealand is anticipated to bode well for the segment growth in the forthcoming years.

According to The Brewers Association, in 2018, small and independent brewers together produced 25.9 million barrels, increasing the overall market share of craft beer by 13.2 % in terms of volume. Companies have introduced full-size brewer machines that can be used for R&D and pilot batch production. The introduction of technologically advanced products is anticipated to propel the growth of the home beer brewing machine market.

Most machines are equipped with multiple features including mashing, boiling, fermenting, conditioning, and packaging. These machines also have a smart display and Wi-Fi connectivity with tablets, smartphones, and desktop. Remote monitoring enables real-time tracking of the brewing process and helps consumers keep track of their production. 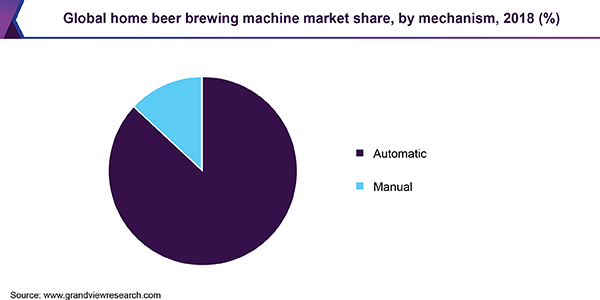 Manufacturers offer mobile-based apps with access to various built-in recipes, as well as an option to create new recipes. Manufacturers also invest in R&D to introduce innovative products equipped with multiple features such as a digital thermostat, multiple taps, and removable keg. These improved designs and smart features are expected to assist the growth of the market.

The manual machines segment is expected to witness a CAGR of 9.7% from 2019 to 2025. These machines are popular among small-scale and first-time custom craft beer manufacturers. An increasing number of small-scale craft beer manufacturers in Western European countries, Australia, and New Zealand is expected to drive the market. However, the manual brewing process is time-consuming, space demanding, and messy, hindering the growth of the market.

The global production and consumption of craft beer are steadily increasing. Americas held the leading market share of 55.0% in 2018. The increasing popularity of homemade beer among millennials is the major regional growth driver. In addition, growing preference for craft and localized beer produced by micro-breweries has ramped up the regional product demand.

Asia Pacific is expected to witness the fastest CAGR of 16.0% from 2019 to 2025. Increasing consumption of beer in countries such as China and India is driving the initiate sales on a large scale. Countries such as India, China, and Australia among others are expected to contribute to the growing regional market share owing to shifting cultural trends and rising consumption of craft beer. A huge rise in the establishment of breweries, bars, and pubs in the region is also anticipated to create growth opportunities in the regional market.

The global market is highly competitive in nature, with the presence of top players such as Brewie and PicoBrew, Speidel Tank-und Behälterbau GmbH, Kickstarter, PBC, WilliamsWarn Ltd, HOME BREW WEST, BrewJacket LLC, LG Electronics., and BREWART. Increasing popularity of craft beer is the primary growth driver. The market is identified by several strategic initiatives such as expansions, mergers and acquisitions, and product and technological innovations, attempted by key manufacturers. For instance, in 2018, MiniBrew introduced a fully automated brewing machine, equipped with smart features such as digital display, remote-controlled, and removable keg.

This report forecasts revenue growth at global, regional, and country levels and provides an analysis of the latest industry trends in each of the sub-segments from 2015 to 2025. For the purpose of this study, Grand View Research has segmented the global home beer brewing machine market report on the basis product, mechanism, and region: