The global Hospital Acquired Infection (HAI) diagnostic market size was estimated to be USD 3.6 billion in 2015. HAIs have been of increasing concern in healthcare facilities across the globe. According to the WHO, among hundred patients in hospitals, ten patients are estimated to suffer from HAIs in developing countries, and seven in developed countries.

In developed countries, after cancer and cardiovascular diseases, HAI is considered to be the third leading reason for mortality. In the U.S. and European regions, six million patients are affected every year, resulting in around150,000 deaths. 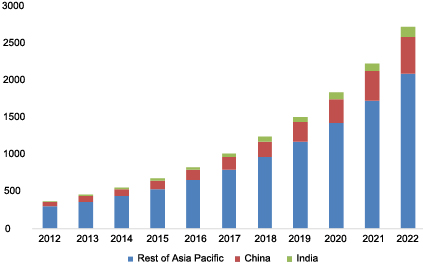 The industry is anticipated to witness significant growth in the next few years. One of the key factors driving industry growth is the rising geriatric population base. Advancing age of the geriatric population makes them more vulnerable and prone to diseases, thus increasing the demand for diagnosis.

Other aspects supporting industry growth are growing demand for HAI diagnostics from middle and low-income countries such as India and Brazil, the development of technologically advanced diagnostic products, rising awareness among healthcare workers, and initiatives taken by governments to counter the prevalence of HAIs.
However, decreasing prevalence of nosocomial infections in developed countries owing to improved healthcare infrastructure and rising awareness are expected to restrict industry growth.

The HAI diagnostic market is broadly classified into Blood Stream Infections (BSI), Urinary Tract Infections (UTI), Surgical Site Infections (SSI), pneumonia/lower respiratory infections, and others such as cardiovascular and gastrointestinal infections. The UTI diagnostics market is expected to lead the market with the largest share in the year 2015, whereas the industry for diagnosis of pneumonia as a nosocomial infection is anticipated to witness the highest growth in the industry during the forecast period.

On the basis of types of tests, the industry is segmented into molecular diagnostics and other IVD tests including urinalysis and blood tests. The molecular diagnostics segment is projected to grow at the highest CAGR during the period of 2015 to 2022. Rapid results with less turnaround time, high sensitivity, and accuracy are some of the factors attributing to industry growth in the near future.

North America, Europe, Asia-Pacific, Latin America, and MEA are the key regions considered in the report. The North American industry is estimated to hold the largest market share in the year 2015 and is anticipated to grow at a significant growth rate. However, the industry in the Asia-Pacific region is projected to grow at the highest CAGR of around 21% during the review period. The rising incidence of HAI in countries such as India and China is expected to further boost the industry in the near future.

Some major players actively involved in the industry are bioMérieux, Abbott Laboratories, Roche AG, and Siemens Healthcare among others. In an attempt to ensure sustainability and register growth, the companies adopted several strategies such as partnerships, joint ventures, new product developments, collaborations, and acquisitions.

For instance, Abbott, Inc. has announced its agreement to acquire Massachusetts-based Alere in a deal of USD 5.8 billion. Abbott has taken this step to increase its leadership in point of care testing and broaden its diagnostics solution offerings. Abbott is planning to expand its infectious products portfolio.

A surge in hospital traffic due to admissions for Covid-19 cases has increased the burden of hospital-acquired infections. The overpopulation of major healthcare infrastructure due to the Covid-19 pandemic is a key aspect taken into account while updating the market model for this report.