The global Human Papillomavirus (HPV) testing and Papanicolaou test (Pap test) market size was valued at over USD 5,072.1 million in 2015. The increasing incidence rate of cervical and vaginal cancer is the key driver for market growth. The causative agent of cervical cancer is a sexually-transmissible genital virus, the HPV. In cases of chronic HPV infections, the formed pre-malignant lesions or abnormal cell growths in the reproductive tract give rise to a more progressive and malignant form of cervical cancer. The HPV test and Pap test help in the screening and early detection of cervical cancer, which facilitates timely intervention at an early stage in women. 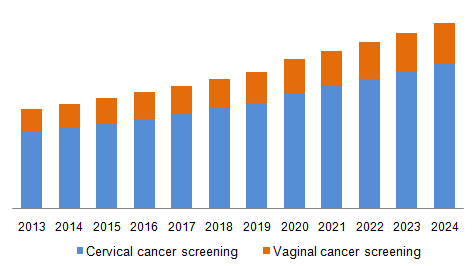 According to the CDC reports 2015, 16 out of 100,000 women are expected to be detected with cervical cancer every year. Globally, it has the second highest mortality rate and is the third-most commonly occurring cancer in women.

The application segment of the market includes cervical and vaginal cancer screening. Cervical cancer screening tests segment dominated the application segment in 2015 owing to the increasing awareness about the benefits associated with the early detection of cancer and the growing government support towards controlling the incidence rate of late-stage cervical cancer.

Laboratories dominated the end-use segment of the market in 2015. Researchers are conducting collaborative studies to discover the advantages of combining the HPV and Pap tests for the early diagnosis of reproductive tract cancer in women.

For instance, in May 2016, BioReference Laboratories collaborated with Houston Methodist Hospital to conduct a study on 1,600 patients, wherein patients were subjected to a combined HPV-Pap test; the two tests synergistically increased the chances of cervical cancer diagnosis that led to fewer cases going undiagnosed and hence untreated.

Hospitals are expected to be one of the fastest-growing end-use segments. This is due to the technological advancements and the increasing healthcare infrastructure, which has enabled hospitals to equip themselves with the latest diagnostic systems, thereby increasing diagnostic efficiency and overall patient satisfaction.

In 2015, North America was the largest regional market in terms of revenue due to the increased cases of cervical cancer and the growing awareness amongst women due to the various government initiatives and research studies that were undertaken in this direction.

In January 2016, UAB Comprehensive Cancer Centre, along with other cancer centers in the U.S. conducted awareness programs that promoted the use of the cancer-preventive HPV vaccine. In 2014, the FDA approved the new HPV vaccine, which is an updated version of the previously approved Gardasil vaccine in 2006.

Asia Pacific is expected to grow at a rapid rate over the forecast period owing to the increasing burden of communicable diseases in developing economies such as India. The increasing number of government awareness programs that promote the benefits of early cancer screening is further expected to propel the market growth in the coming years. For instance, in February 2014, Qiagen launched the careHPV test in India. The launch of this new diagnostic test is expected to expand preventive screening initiatives against cervical cancer.

These players are involved in contributing to technological advancements and innovations of test kits and devices. In March 2016, Becton Dickinson and Company (BD) received the FDA clearance for the fully automated cervical cancer screening system. This system, being fully automated, significantly reduces human interference as well as the cost and time associated with performing non-automated tests, thereby increasing overall workflow efficiency.

Moreover, in September 2015, Becton Dickinson and Company (BD) formed a worldwide collaboration with Seegene, where the latter is expected to produce molecular diagnostics exclusively for BD with the help of its advanced, PCR optimization technologies, TOCE, MuDT, and DPO.