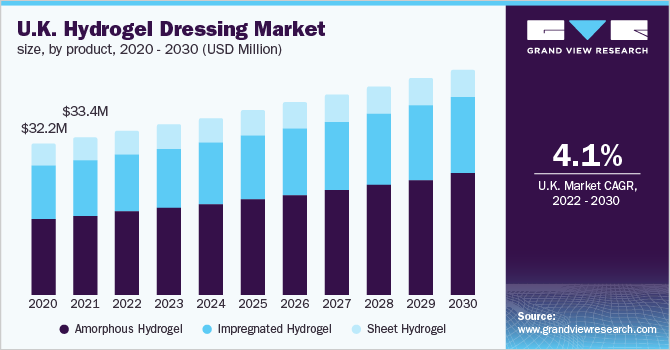 Hydrogel dressing aids in treatment of chronic wounds, including pressure ulcers, venous leg ulcers, and diabetic foot ulcers. Globally, growing number of people with diabetes, is leading to an increase in those who have diabetic foot ulcers. According to International Diabetes Federation (IDF), as of February 2020, 463 million people were calculated to be living with diabetes. Moreover, as per similar source, around 59 million diabetic populations was found in the European region in 2020, which is expected to reach 68 million by 2045. Numerous healthcare professionals use hydrogel dressing as it promotes rapid wound healing. This is expected to increase demand for hydrogel dressing throughout the forecast period.

The market for hydrogel dressings is also expected to grow because of increased occurrences of burns, trauma, and road accidents. For instance, according to the WHO's 2018 estimate, approximately 1,000,000 individuals in India have severe or moderate burns each year. Additionally, 1,291,500 fire incidents were confirmed in 2019, with 16,600 injuries and 3,704 fatalities, according to the U.S. Fire Administration. Furthermore, the WHO reports that nearly 1.3 million individuals lose their lives in traffic accidents each year. Similar to this, the Brake group estimates that between 20 and 50 million non-fatal injuries are caused on by automotive accidents annually. These accidents typically result in severe bleeding and other injuries, necessitating rapid medical care and surgical operations to relieve patients' immediate suffering.

The COVID-19 pandemic had an unfavorable impact on the hydrogel dressing market, due to the cancellation or postponement of elective procedures. However, the hydrogel dressing market is expected to grow post COVID-19 pandemic. Moreover, several market players are undertaking several initiatives such as product launches, and geographic expansion, to increase their global reach. In January 2022, Nexgel Advanced Hydrogel Solutions, announced the launch of MEDAGEL, a hydrogel patch to treat & prevent foot blisters. In addition, increased telehealth and virtual consultation penetration have aided the market's recovery post the COVID-19 pandemic. For instance,

Thus, the aforementioned factors will likely cause the hydrogel dressing industry to grow quickly in the post-pandemic period.

Based on product, the amorphous hydrogel segment is anticipated to capture 50.4% of the total market share in 2021 and is expected to dominate the product segment over the forecast period. Amorphous hydrogel dressing is used to provide moisture to a dry wound and retain a moist healing environment. These dressings are commonly used in minor burns, and necrotic wounds, and to heal tissue damaged due to radiation. There has been an increasing number of people suffering from burns globally which are expected to increase the demand for hydrogel dressings. According to an article posted by American Burn Association in February 2021, more than 400,000 people in the U.S. annually receive treatment for burn injuries. Similarly, as per the WHO, every year, thermal burn is estimated to affect 6.6 million people worldwide. Hence, due to the above-mentioned factors, the amorphous hydrogel segment is anticipated to have a considerable growth rate during the forecast years.

Impregnated hydrogel dressing is used for recovery of partial & full thickness wounds, and deep wounds such as skin tears. The rising incidence and prevalence of skin tears are anticipated to boost the use of hydrogel dressing. For instance, as per a study conducted by NCBI in Ontario, out of the total individuals registered in the study, the prevalence of skin tears was found to be 20.8%, with an incidence rate of 18.9% during the four weeks of the study. Similarly, as per the latest available statistics by World Population Review, knife-related deaths in South Africa touched 16.95 per 100,000 population, whereas, India ranked 3rd in top 10 countries with the most deaths due to stabbing along with deaths of around 8,931 people. Stab wounds require to be kept moist for quick recovery. Thus, with rising cases of acute wounds such as skin tears, and stab wounds, the segment is forecasted to have a significant growth rate.

The chronic wounds segment dominated the hydrogel market and accounted for a revenue share of 60.02% in 2021, and is projected to show a considerable growth rate over forecast years. The dominance can be accredited to the rise in the geriatric population, the increase in the number of people suffering from diabetic foot ulcers, and obesity. The surge in the number of people suffering from obesity is expected to impel the number of patients suffering from pressure ulcers and venous leg ulcers. For instance, according to an article published by Trust for America’s Health organization in September 2021, the obesity rate in 16 states of the U.S. as of 2020 was above 35%. As obesity is associated with the increasing prevalence of pressure ulcers, the use of hydrogel dressing is anticipated to increase over the forecast period.

However, the acute wound segment is projected to witness the fastest CAGR of 4.4% during the forecast years. The primary element fueling the segment's rise is the increase in cases of various traumatic injuries, including gunshot wounds, lacerations, stab wounds, and accidents. For instance, the Pew Research Center estimates that 45,222 Americans died from firearm-related injuries in 2020. Additionally, according to the same source, the number of gunshot wounds grew by 14% between 2019 and 2020 and 25% during the previous five years. Similarly, according to NCBI, 78.2 million people suffer injuries from car accidents each year, whereas, in the next 20 years, this number is anticipated to increase by almost 65%. Hence, as a result of the aforementioned reasons, the acute wound segment is estimated to propel over the forecast duration.

The hospital segment held the largest revenue share of 45.3% in 2021. The dominance of this market segment may be attributed to the rise in surgical procedures because of sedentary lifestyles worldwide, along with the rise in bariatric procedures, which demand the use of hydrogel dressing solutions to avoid surgical site infections. In addition, hospitals have long-term contracts with suppliers and are recognized as bulk buyer of hydrogel dressing. Moreover, according to Smith & Nephew, in a typical hospital setting, patients with wounds occupy between 25 and 40% of beds. Hence, owing to such factors, the segment is anticipated to grow during the forecast period. 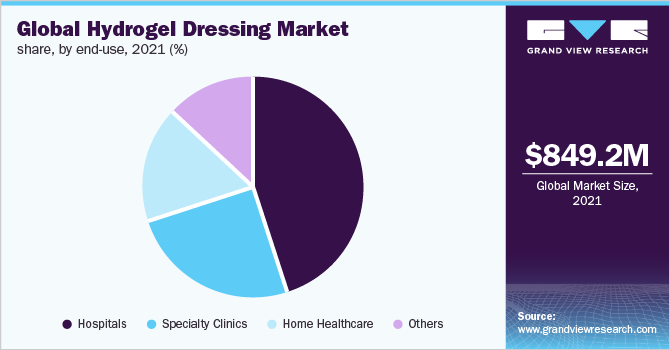 The home healthcare segment is anticipated to witness the fastest CAGR of 4.9% during the forecast period due to patient’s growing demand shift from hospital to home care settings. Most procedures have a lengthy healing phase, which necessitates regular dressing changes. Additionally, elderly people with wounds prefer home care over hospitalization. Global geriatric population growth can be accredited for the growth of hydrogel dressing market. According to the Economic and Social Commission for Asia and the Pacific, there will be 1.3 billion older people worldwide in 2050, up from 630 million in 2020. In a similar manner, 13.6% of the Asia-Pacific region is predicted to have a quarter of the world's elderly population by 2050, thereby, boosting the growth of the market.

Additionally, a growing number of people with chronic diseases opt to receive treatment at home due to escalating healthcare costs. As hydrogel dressings are used to treat, diagnose, and monitor a variety of chronic and acute wounds, this trend is anticipated to increase demand for them. Therefore, it is projected that these factors will accelerate segment expansion during the forecast period.

North America dominated the hydrogel dressing market with a revenue share of 45.4% in 2021 and is expected to witness a considerable growth rate in the forecast period. The large population bases and expanding patient pools in countries like the U.S. and Canada are the main factors driving the expansion of the hydrogel dressing industry in this area. Additionally, the growing diabetic population is projected to drive increased demand for hydrogel dressing supplies in this area because diabetics are more likely to develop chronic wounds.

For instance, according to the American Diabetes Association, there are over 1.9 million Americans with type 1 diabetes, including around 244,000 adolescents and teenagers. In contrast, 37.3 million Americans were predicted to have diabetes in 2019. Further, the market for hydrogel dressing products in North America is also anticipated to increase because of the rising number of gunshot wounds, traumatic accidents, and the availability of qualified specialists in this region. 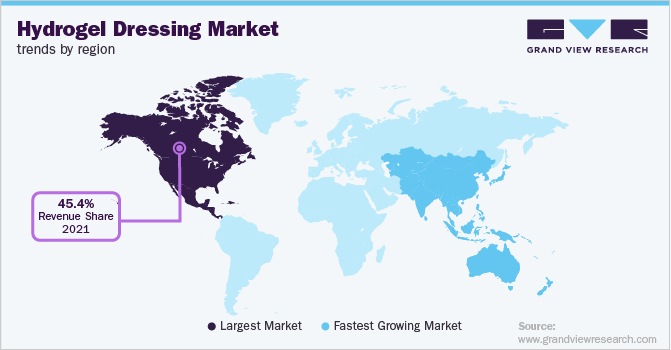 Asia Pacific is estimated to witness the highest CAGR of 4.9% during the forecast period. This can be linked to the region's increased chronic diseases and obesity caused by changing lifestyles. For instance, according to Asia Development Bank Institute, there are around 1 billion overweight and obese people in the Asia Pacific region, which is the highest population in the world. Moreover, as per a similar source, in the Asia Pacific region, 2 out of 5 adults are either overweight or obese. Obese people are more susceptible to other chronic diseases such as diabetes, venous leg ulcers, pressure ulcers, thereby impelling the hydrogel dressing market in the region.

The increase in surgical procedures in this area is also anticipated to fuel market expansion. For instance, according to Business Insider, South Korea performs the most cosmetic procedures worldwide. As a result of the factors mentioned above, the Asia-Pacific is predicted to see the hydrogel dressing market's fastest growth rate.

The market is comprised of several small and large manufacturers. The degree of competition and competitive rivalry in the market is anticipated to intensify over the forecast period. Major companies are focusing on merger acquisitions, product launches, and geographic expansion to have a competitive edge over others. For instance, in October 2019, 3M expanded its wound care offerings, by completing the acquisition of Acelity, Inc. Thus, with various strategies acquired by market players, such as collaborations, and product approvals, to strengthen their product portfolios, the hydrogel dressing market is expected to impel during the forecast period. Some of the prominent players in the hydrogel dressing market include:

This report forecasts revenue growth at global, regional, and country levels and provides an analysis of the latest industry trends in each of the sub-segments from 2018 to 2030. For the purpose of this study, Grand View Research has segmented the global hydrogel dressing market report on the basis of product, application, end-use, and region: 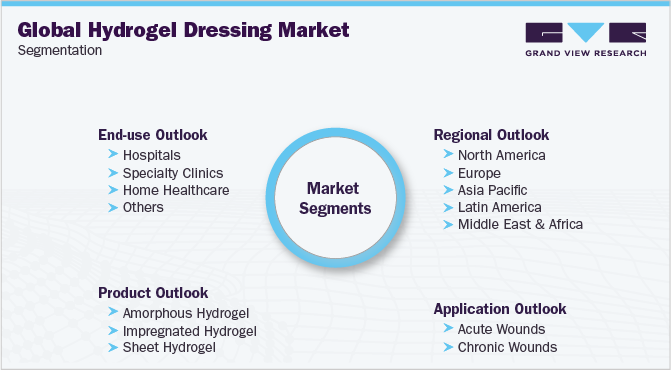 How big is the hydrogel dressing market?

What is the hydrogel dressing market growth?

Which segment accounted for the largest hydrogel dressing market share?

b. North America dominated the hydrogel dressing market in 2021 during the forecast period and is expected to witness a growth rate of 4.31% over the forecast period. This can be attributed to the rising patient population and the presence of major market players

Who are the key players in the hydrogel dressing market?

What are the factors driving the hydrogel dressing market?

b. Key factors that are driving the market growth include an increasing number of traumatic accidents, the surge in the global geriatric population, rising technological advancements, a rise in the number of people suffering from different chronic and acute disorders, and a rising incidence of burn cases worldwide.