The global ice hockey equipment market size was valued at USD 847.4 million in 2018. Increase in participation of players in ice hockey and rising availability of synthetic ice arenas are the major factors anticipated to drive the market. Additionally, favorable government initiatives to promote ice hockey is expected to increase the participation rate, thereby propelling market growth during the forecast period.

The International Ice Hockey Federation (IIHF) is the governing body consisting of 76 member nations for the ice hockey sport. It provides the rules and guidelines for the sport at an international level. In addition to providing rules, the organization organizes various campaigns and programs to promote ice hockey across the globe. Moreover, IIHF provides coaching services to train potential players for upcoming tournaments. Such initiatives are expected to propel market demand for ice hockey equipment during the projected period. 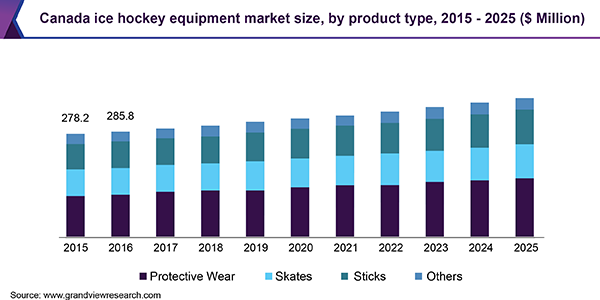 National Hockey League is one of the major professional sports leagues in countries such as the U.S. and Canada. In terms of revenue, NHL ranks fifth among professional sports leagues in the world. Many similar major championships have been started to promote the sport. For instance, junior level championships and age-specific championships are organized to encourage the youth to play ice hockey. In the 2018 IIHF championships, almost 70% of the registered Canadian players were under the age of 20. This is expected to increase the number of players in the sport, thereby propelling ice hockey equipment market growth in the next few years.

Increasing participation of women in ice hockey championships is an additional factor positively influencing the growth of the market. According to the IIHF, the number of registered female players across the globe increased from 153,665 to 205,674 from 2007 to 2018. Women participation is increasing in major countries like Canada and the U.S. According to the survey published on the IIHF website, out of 637,000 registered players, 88,500 were female players. This increase in participation rate is anticipated to fuel the market growth during the forecast period.

In addition, increasing participation rates and availability of synthetic ice rinks are expected to positively influence market growth. Synthetic ice is a solid polymer material intended to use where frozen ice surface is impractical owing to high temperatures. Since this ice does not require any refrigeration equipment, it serves as an excellent alternative to artificial ice rinks, which requires a coolant to produce cold temperature below the surface of the water. The IIHF provides funds to build such rinks in regions like Asia Pacific and Middle East and Africa to promote ice hockey. This is expected to propel market growth in the next few years.

Protective wear occupied the largest ice hockey equipment market share in 2018 and is expected to expand at the fastest CAGR of 3.7% during the forecast period. A major factor contributing to the growth of this segment is the guidelines mentioned for the safety equipment for ice hockey players. Ice hockey is a collision sport and major injuries occur due to contact with other players, sticks, the puck, and boards. Other serious injuries like concussions, broken teeth, and spinal cord injuries are also witnessed in this sport. According to the British Columbia Injury Research and Prevention Unit, Ice Hockey has been ranked third in emergency room visits and about 15% of injuries are head concussions. Such surveys are influencing manufacturers to invest in product innovation to provide maximum safety to the players. This is expected to fuel the product demand from 2019 to 2025.

Ice hockey sticks is another prominent segment anticipated to witness significant growth in the forecast period. Shelf life of the sticks is the major factor driving the consumption of this product. On average, a novice hockey player changes his hockey stick at least twice a year even if he does not play regularly. Durability of hockey sticks depends on factors such as the raw material used to construct the stick, the playing position in the team, and frequency of play. Increased frequency of play reduces the stiffness of the stick due to which an upgrade is recommended. These factors are expected to fuel the segment growth during the projected period.

Offline distribution of ice hockey equipment occupied 86.6% share of the global revenue in 2018. Major reason for sales via offline channel is the presence of retail outlets of global manufacturers across the world. High visibility of sports specialty stores is another factor driving the sales through offline channel. In addition, players require hockey equipment of the correct size and fit to ensure comfort during the play.

Moreover, sizing guides have been provided by USA Hockey to help the players choose their equipment. For instance, USA hockey has mentioned that a hockey stick is supposed to measure 63 inches from heel to the end of the shaft. In case of equipment violation, the player or goalkeeper can attract a minor penalty. Hence, players tend to personally visit the offline stores to buy equipment. 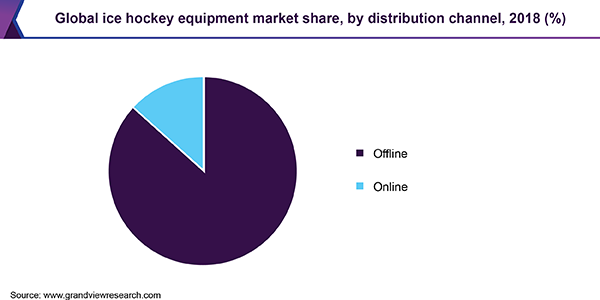 Moreover, various training camps that have their own ice arenas for training and organizing championships drive the offline sales of ice hockey equipment. This segment is expected to maintain its lead owing to increasing market penetration in countries like Japan, Korea, Australia, and South Africa, which are witnessing an increase in the number of hockey players.

Online sales of ice hockey equipment are expected to expand at a CAGR of 4.2% from 2019 to 2025. Global manufacturers are launching their own websites to introduce product launches and display their product portfolio. Due to the increased penetration of internet services all over the world, companies are focusing on leveraging digital technology to expand their customer base. Moreover, due to increase in consumption of mobiles and tablets, many sports manufactures are launching their apps to promote online sales.

Other factors contributing to the segment growth are reviews and blogs about the products on various e-commerce websites by consumers who have completed the purchase. This feature is beneficial to both the consumer and product manufacturers. Moreover, online channels do not require heavy investment as the need to maintain an inventory is eliminated. This is expected to fuel investment in digital marketing by companies to drive online sales during the forecast period.

In terms of revenue, the market in North America accounted for a share of 67.2% in 2018. Majority of the global sales were driven by Canada owing to ice hockey being the national sport in the country. U.S. is another important nation witnessing a rise in participation rate due to increase in U.S. based championships and tournaments for kids and young adults under 19-8 years of age.

Rest of the world including Asia Pacific and Middle East countries are anticipated to witness substantial growth during the forecast period. Increase in availability of synthetic ice rinks, along with rising interest in sports, is expected to positively influence market demand in this region. The Commonwealth of Independent States is expected to expand at a CAGR of 4.4% over the forecast period. Russia dominated the regional market with an 89.5% share in 2018. Increasing participation from countries like Kazakhstan and Belarus is anticipated to fuel market growth in this region.

The global market is highly concentrated with the market share occupied by few major global players. Heavy investments are made by these players in product innovation. The companies are majorly focusing on the protective wear equipment as there is a variety of product offerings in this segment. Moreover, changing guidelines related to knee pads for ice hockey players, mainly goal-keepers, is expected to influence product innovation, which will, in turn, propel market growth.

This report forecasts revenue growth at the global, regional, and country levels and provides an analysis of the latest industry trends in each of the sub-segments from 2015 to 2025. For the purpose of this study, Grand View Research has segmented the global ice hockey equipment market report on the basis of product type, distribution channel, and region: