The global idiopathic pulmonary fibrosis treatment market size was valued at USD 2.00 billion in 2018 and is estimated to expand at a CAGR of 12.7% over the forecast period. Increasing prevalence of idiopathic pulmonary fibrosis (IPF) and increasing geriatric population are the key drivers of the market. Rising number of cigarette smoking people, leading to a high prevalence of IPF, is also projected to fuel the growth.

Aging is considered as the greatest risk factor for development. Hence, the fact that the global base of geriatric population is anticipated to grow over the forecast period and is expected to serve this market as a high impact rendering driver. According to the World Population Aging Report 2015 by United Nations, the number of elderly people aged 60 years and above is expected to grow by 56%, i.e., from 901 million in 2015 to 1.4 billion in 2030. In addition, the number of elderly people aged 80 and over is projected to triple by 2050 and will reach 434 million. 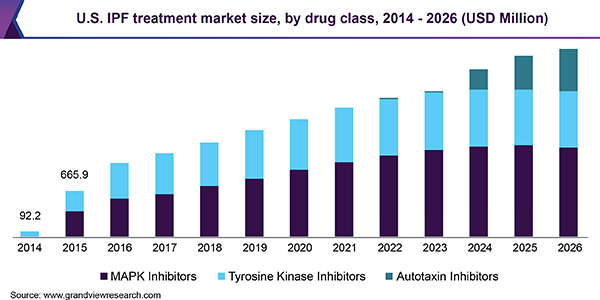 Increasing prevalence of IPF is anticipated to propel the market. According to the National Institutes of Health (NIH), nearly 30,000 to 40,000 new cases of IPF are diagnosed each year and 100,000 people are affected in the U.S. Furthermore, commercialization of novel drugs and surge in cigarette smoking population are some of the other key factors expected to boost the market growth over the forecast period.

The presence of a strong pipeline is likely to have a positive impact on the IPF treatments market. For instance, GLPG1690, an autotaxin inhibitor is developed by Galapagos and is currently in phase III trials in the U.S. and Europe and is expected to be commercialized in 2022. Moreover, there are nearly 20 drugs in phase II clinical trials with a novel mechanism of action. The new approaches to treatment include combination therapy and third-line therapy in patients who have failed Ofev and Esbriet.

On the basis of drug class, the idiopathic pulmonary fibrosis treatment market is segmented into MAPK inhibitors, tyrosine kinase inhibitors, and autotaxin inhibitors. Esbriet (MAPK Inhibitor) by F. Hoffman La Roche and Ofev (Tyrosine Kinase Inhibitor) by Boehringer Ingelheim International GmbH are the only drugs approved by the Food and Drug Administration (FDA) for the treatment of IPF. Both these drugs slow down the rate of functional decline in patients with IPF.

MAPK Inhibitors (Esbriet) led the market in 2018 and is estimated to expand at a CAGR of 8.9% over the forecast period. Esbriet will have first mover advantage for years as it was the first drug approved in 2011 in Europe for treating mild to moderate IPF and in 2014 in the U.S. for IPF. The drug has a well-established safety profile and expected to gain high market share due to patients switching from off label and non-pharmacological therapies.

Tyrosine Kinase Inhibitors (OFEV) is expected to expand at a lucrative CAGR over the forecast period. OFEV was designated as a breakthrough therapy and was granted fast track, priority review by the FDA. The drug has gained maximum share in the U.S., whereas usage in Europe and Japan continues to be much lower due to Esbriet’s first mover advantage.

North America led the IPF treatments market in 2018 owing to high market penetration and increasing prices of the drugs. The market is growing rapidly due to accelerated approvals of two drugs in the U.S. in 2014. Moreover, the increasing prevalence of IPF is one of the major factors anticipated to boost the market. 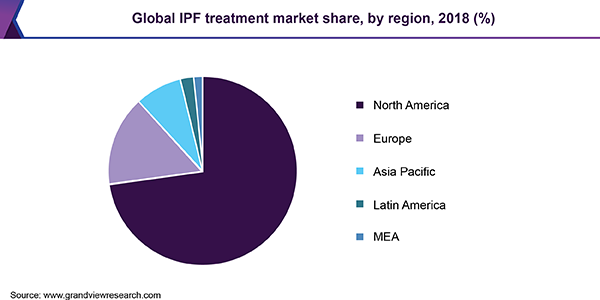 Europe was estimated to be the second-largest market in 2018 owing to the increasing prevalence of IPF. For instance, according to the European Idiopathic Pulmonary Fibrosis Foundation, 30,000 to 35,000 new cases of IPF are diagnosed every year. Moreover, between 80,000 to 111,000 people are living with IPF in Europe. The average life expectancy of patients diagnosed with IPF is 2-5 years.

Major players undertake strategies such as acquisitions, new product development, and product enhancement to gain market share. For instance, in September 2017, F. Hoffman-La Roche Ltd announced positive results of a six-month study that combined Esbriet and Nintedanib. The study showed a similar safety profile for the combination of two drugs to that expected for each drug alone.

This report forecasts revenue growth at global, regional, and country levels and provides an analysis of the latest market trends in each of the sub-segments from 2014 to 2026. For the purpose of this study, Grand View Research has segmented the idiopathic pulmonary fibrosis treatment market on the basis of drug class and region: