ITP (immune thrombocytopenic purpura) is recognized as a rare disease owing to its low prevalence rates. As per the U.S. FDA, the disease has an incidence rate of 3.3 cases per 100,000 in the country. Moreover, according to the European Medicines Agency (EMEA), in Europe, the incidence rate of ITP amounts to 1.6 to 3.9 cases per 100,000 per year. The ITP therapeutics market is primarily driven by the presence of favorable government initiatives and regulations such as the Orphan drug act, U.S., the Orphan Drug Policy Therapeutic Goods Act and Regulations, Australia and the Orphan Drug Regulation, Japan. 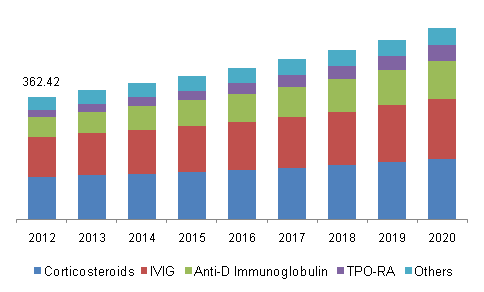 Increasing demand for combination therapies therapy is expected to fuel the future growth of the ITP therapeutics market. Clinical evidence suggests that combination therapies entail relatively lower side effects, are cost-effective, and display higher response rates in patients. Some major combination therapies include corticosteroids and IVIG, rituximab and dexamethasone, TPO-RA (eltrombopag), and dexamethasone. Splenectomy also plays an integral role in shaping the dynamics of the ITP therapeutics market. The procedure refers to the removal of the spleen and is aimed at reducing the amount of anti-platelet antibodies. Two therapeutic classes most affected by splenectomy are TPO-RA and anti-D.

Product segments of ITP therapeutics analyzed in this study include corticosteroids, intravenous immunoglobulin, anti-D immunoglobulin, TPO-RA, and others. Other therapeutic classes mainly comprise monoclonal antibodies, immunosuppressant, and interferon. Monoclonal antibodies especially Rituximab are the most administered therapy in this segment and the patent expiration of this drug in 2013 in Europe, is expected to prompt the launch of biosimilars.  Corticosteroids were the most revenue-generating segment of the market in 2013. Corticosteroids are frequently used as the first line of therapy in patients affected by ITP and therefore, hold high usage rates. Moreover, lower prices associated with these products coupled with patients exhibiting healthy response rates, have aided this segment in gaining usage rates, especially in the emerging and underdeveloped markets.

TPO-RA is the most promising ITP therapeutics segment of the market. Higher response rates exhibited by patients administered with Romiplostim and Eltrombopag is one of the key drivers of this segment. TPO-RA is considered as a viable treatment option in patients witnessing post-splenectomy relapses and is mostly administered after splenectomy failures. The market is expected to witness a boost in 2016, post the commercialization of Avatrombopag. Avatrombopag is currently under phase III clinical trials in Europe and the U.S.

Key regional segments of the ITP Therapeutics market include North America, Europe, Asia-Pacific, and RoW. North America was the leading regional market in 2013, owing to growing incidence rates coupled with the presence of high treatment rates, favorable government initiatives, and funding programs. Asia-Pacific, on the other hand, is expected to gain market share over the next six years. Growing market penetration rates of ITP therapeutics in the emerging markets of India, China, Taiwan, and South Korea coupled with a large presence of untapped opportunities in these countries are some factors accounting for this increase in share. The presence of favorable government initiatives in Japan and Australia is also expected to drive regional market growth.