The inability to control the evacuation of body wastes (urine and feces) is referred to as incontinence. The presence of a large base of patients with unmet medical needs pertaining to incontinence will continue to drive the growth of this market. According to the WHO, incontinence affected 5% to 7% of the world’s population in 2012, with rising incidence rates of obesity and aging identified as two of the primary factors responsible for its high prevalence. In addition, it is reported that women are three times more susceptible to incontinence than men and therefore, dominate a large share of the target user/customer base. Incontinence products have experienced a low market penetration rate in men in the past. However, on account of rising awareness levels, men have begun accepting these products and such a fact has served the market as a driver. The ostomy care products market is also expected to grow at a healthy rate during the forecast period. High prevalence rates of diseases such as inflammatory bowel disease, ulcerative colitis, and Crohn’s disease are some of the factors expected to drive market demand over the next six years.

Key incontinence care product segments analyzed and reported in this study include absorbents, incontinence bags and others including clamps, cleaners, deodorizers and urinals. Adsorbents dominated the incontinence care products market, primarily on account of high usage rates and rising popularity of disposable adult diapers and disposable adult shields, accounting for close to 90% of overall market revenue in 2012. Moreover, this product segment is expected to exhibit the highest CAGR of 6.0% from 2013 to 2020. The introduction of innovative and personalized products targeting the achievement of user friendliness and comfort and the gradual de-stigmatization of products such as the adult diapers are some of the factors justifying its high growth rate. 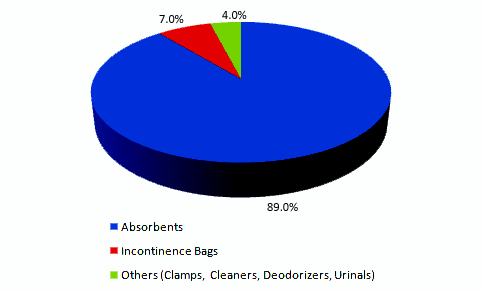 Key ostomy care products include ostomy bags, deodorants, skin barriers and irrigation products. Ostomy bags dominated the ostomy care products market with a market share of over 70% in 2012. This market is also expected to grow at the fastest rate during the forecast period on account of rising prevalence of diseases such as Crohn's disease, inflammatory bowel disease, growing base of the elderly population across the globe and rising patient awareness levels. Also, the introduction of user-friendly and skin friendly ostomy bags is expected to drive further the growth of this market. Colostomy bags dominated the global ostomy bags market in terms of revenue share at 37.0% in 2012.  Its market was valued at USD 1,042.0 million in 2012.

Low product differentiation potential and the presence of a large base of generic product manufacturers marketing their products at a relatively lower price are some of the factors keeping the market highly competitive.  Moreover, mergers and acquisitions are one of the most popular business strategies adopted by market players to enter new markets and gain sustainability, such as the acquisition of Artsana Sud S.p.A’s Serenity, an Italian manufacturer and distributor of incontinence products, by Ontex in February 2013. Some of the major market players of this market include SCA (Svenska Cellulosa Aktiebolaget), Kimberly-Clark Corporation, Coloplast Corporation, Unicharm Corporation, ConvaTec, Hollister Inc., B. Braun Melsungen AG and others.