The global individual quick frozen cheese market size was valued at USD 6.24 billion in 2021 and is expected to expand at a compound annual growth rate (CAGR) of 4.8% from 2022 to 2030. The rise in the consumption of fast foods such as pizza, pasta, and burgers has contributed to the increasing demand for cheese varieties such as mozzarella, parmesan, and cheddar. Cheese is a common ingredient in both fast food and fine dining establishments. Furthermore, the growth of the individual quick frozen (IQF) cheese market in the B2B end-use application can be attributed to the rising use of cheese within the food industry. 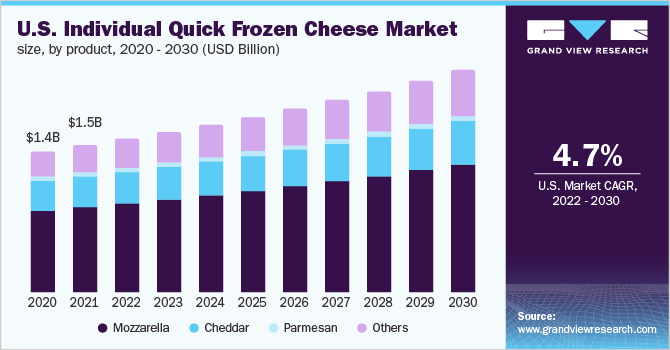 The COVID-19 pandemic has had a negative impact on the market growth, leading to a slight decline owing to the temporary closures of restaurants, food deliveries, and quick-service restaurants globally due to quarantine and lockdown measures, with sales of restaurants decreasing by 60%-70% from March to April 2020 globally. For instance, in August 2020, Domino’s Pizza, Inc. reported a drop in orders during the early stage of the COVID-19 pandemic as it stopped customers from collecting orders and dropped popular choices such as the cheeseburger pizza, stuffed crust, and chicken wings from its menus as a part of safety measures. Delivery orders of the company increased by 12% in the first six months of 2020, but collection orders dropped by 44%.

Consumers’ eating priorities have led to strong demand for IQF cheese in the U.S. Furthermore, consumers’ demand for exclusive cheeses is driven by healthfulness, convenience, and sustainability. Several cheesemakers are addressing the growing consumer desire for fast food and ready-to-eat meals, in which cheese is a major ingredient, hence, they are continuously working on improving the quality of cheese and preserving it for a longer duration, which is expected to drive the market in the country.

The growth of the mozzarella segment is due to the increased demand for pizzas as the pizza industry keeps evolving and consumers are more likely to order a pizza when they go out to eat fast food as compared to other foods. According to an article published on SidmartinBio, in August 2020, the average American ate nearly 23 pounds of pizza per year. Furthermore, IQF mozzarella still works quite alright when melted and used as a topping over toasts, antipasti, baguettes, sandwiches, and salads.

Furthermore, according to the figures published in BikeHike, there were nearly 78,092 pizza restaurants in the U.S. in 2020, around 53% of which were independent pizzerias. Chain restaurants - defined as having ten or more stores - increased their number of units to nearly 36,213 in 2020, which indicates strong growth of the U.S. commercial foodservice market. According to the data published by the International Dairy Foods Association, in September 2020, the domestic per capita consumption of cheese is up by 19% in comparison to previous years as Americans have always turned to products that are fresh and prove to be a nutritious staple in their diets.

The U.S. and the European Union (EU) are the world's major producers and exporters of cheese, accounting for approximately 70% of global exports. According to the U.S. Dairy Export Council, the relaxation of quota constraints on milk production in the EU led to an increase of 660,000 metric tons in cheese output in 2020. With the rising consumption of cheese among consumers, most manufacturers have been launching cheese-based fast-food options to gain a majority share in the market. For instance, Taco Bell’s Quesalupa requires five times more cheese than a regular taco. Therefore, fast-food manufacturers are increasing the ordering value in terms of volume.

The mozzarella segment accounted for the largest revenue share of over 60.0% in 2021. IQF mozzarella is a high-performing natural mozzarella, available in a convenient shred format and imparts a consistent performance. IQF mozzarella cheese has a great reheating performance and is ideal for reheating at home, which has been driving its consumption at a faster pace. Softer cheeses like young cheddar and mozzarella can be frozen, cubed (whole in the case of mozzarella), or shredded. IQF mozzarella from pasteurized cow’s milk allows efficient melting and browning properties. These factors are driving the consumption.

The others segment is anticipated to expand at the highest CAGR of 5.8% over the forecast period. Other types of cheeses that undergo the IQF process are feta, Gouda, Swiss, Colby, yellow cheese, and gorgonzola. IQF products have almost no limitation in terms of handling and shelf life; as a result, many different types of cheese can be found in this category. These are typically used in French recipes, tarts, pizzas, salads, and starters. Consumers across the globe are consuming exclusive cheese products with the help of IQF technology.

Non-Standard of Identity (SOI) cheese accounted for the largest revenue share of over 65.0% in 2021. SOI cheese has limitations including price fluctuations, taste challenges, and performance limitations that prove challenging when it comes to formulating a variety of prepared food applications. Food scientists and formulators have to opt for non-standard of identity cheese as SOI cheeses limit formulators’ degrees of freedom in creating innovative formulations. While pricing in the dynamic natural cheese market changes weekly, non-SOI is able to maintain a consistently lower and stable cost due to the use of ingredients other than cheese. Non-SOI cheeses further allow greater use of new and innovative flavors to better meet the growing consumer demand.

Standard of Identity (SOI) cheese is anticipated to expand at the highest CAGR of 5.6% over the forecast period. Standards of Identity (SOI) have been established in many countries, including the U.S., Canada, Australia, and New Zealand, for a wide variety of foods, including dairy products. In the U.S., SOI is considered an important tool for defining product quality and can also be used to ensure authenticity. The Federal Food, Drug, and Cosmetic Act describes SOI as being used to promote honesty and fair dealing in the interest of consumers and to protect consumers from economic adulteration, which is indicative of the robust growth of the segment in the forecast period.

The cow cheese segment accounted for the largest revenue share of over 70.0% in 2021 and is expected to maintain its lead over the forecast period. Owing to the growing consumption of cheese made from cow milk, several manufacturers and farmers have expanded production by buying more milk-producing cows and building bigger barns. In terms of availability, cow’s milk cheese is much more common. Cow’s milk IQF cheese is commonly used in frozen pizzas, refrigerated pizzas, pizza kits, and fresh pizzas that are made and served at foodservice establishments across the globe. In addition, as pizza chains continue to expand their restaurants across the world, the demand for cheese and the need for high-performance cheeses continue to grow. 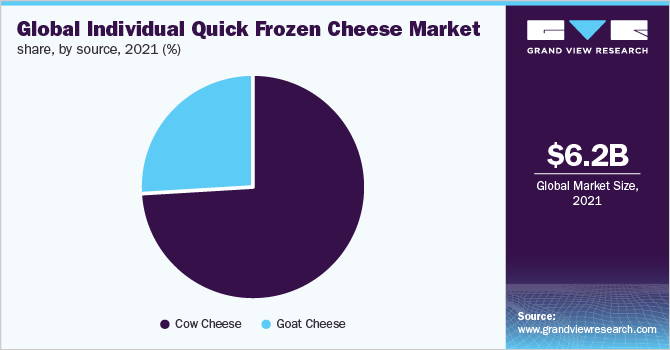 The goat cheese segment is anticipated to expand at the highest CAGR of 5.7% over the forecast period. In recent years, goat cheese has been a popular alternative to cheese made from cow’s milk owing to the numerous health benefits it offers. Goat cheese contains riboflavin, also known as vitamin B2, which plays an important role in many bodily processes, especially in the production and functioning of new cells. Several U.S. dairy goat farmers and marketers are insistently educating consumers about the benefits of goat milk and products made from it, which has led to the segment growth.

Europe held the largest revenue share of over 40.0% in 2021. IQF cheese is easy to use and spread on various food products, which has contributed to its popularity in countries like Germany, France, Italy, and the U.K. Furthermore, rising awareness regarding the benefits of IQF over traditional freezing methods bodes well for ready meals and ready-to-go products in the foodservice sector in the region. Furthermore, the demand for goat cheese has increased rapidly over the past decade owing to health benefits like lower risk of allergies, easy digestion, and lower risk of infantile constipation. 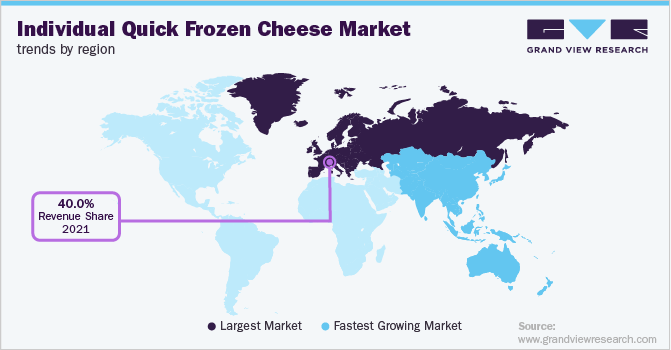 Asia Pacific is expected to emerge as the fastest-growing region during the forecast period. Rapid urbanization and the westernization of food in Asia Pacific countries have propelled the demand for IQF cheese. Although cheese consumption in Asia remains lower than that in Europe and the U.S., the westernization of food habits of the Asian population has led to an increase in the demand for fast foods and ready meals, especially among younger adults who are more exposed to these foods. The increasing consumption of pizzas, pasta, and other European-style fast foods appears to be a fundamental consumer trend, particularly among Asian millennials, fueling the market growth.

The market is characterized by the presence of some large multinational companies with a strong presence across the globe. Companies have been implementing various expansion strategies such as mergers & acquisitions, capacity expansions, strengthening of online presence, expansion of product portfolios, and new product launches to gain a competitive advantage. For instance:

Some prominent players in the global IQF cheese market include:

This report forecasts revenue growth at the global, regional, and country levels and provides an analysis of the latest industry trends and opportunities in each of the sub-segments from 2017 to 2030. For the purpose of this study, Grand View Research has segmented the global individual quick frozen cheese market report on the basis of product, source, type, and region: 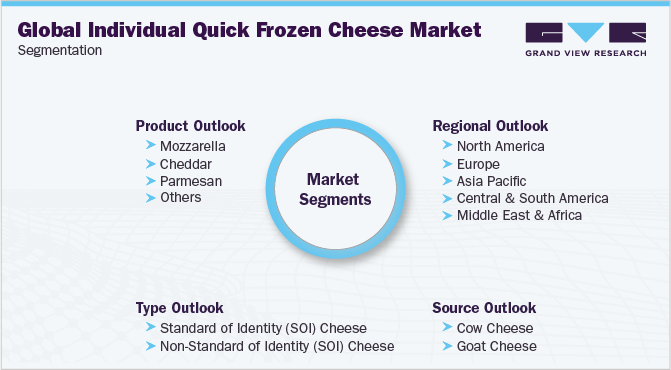 How big is the individual quick frozen cheese market?

What is the individual quick frozen cheese market growth?

b. Europe dominated the IQF cheese market with a share of 40.6% in 2021. This is attributable to the rapid increase in the number of pizzerias and fast-food chains across the region.

Who are the key players in individual quick frozen cheese market?

What are the factors driving the individual quick frozen cheese market?

b. Key factors that are driving the market growth include the growing availability of IQF cheese in blocks, cubes, and slices is drawing the attention of food manufacturers. IQF shredded and diced cheese products are one of the fastest-growing categories in cheese owing to their convenience and price structure, which has made these products very attractive in recent years.