The global indoor farming market size was valued at USD 26.8 billion in 2018 and is expected to expand at a CAGR of 9.19% from 2019 to 2025. Increasing consumer awareness regarding the advantages of consuming fresh and high-quality food is expected to drive growth. In addition, the rising population across the globe, especially in emerging economies such as China, India, among others, has led to an increase in the food demand, which in turn is spurring the market growth. However, the changing climatic conditions contribute to existing environmental problems, such as soil degradation and groundwater depletion, affecting the food and agriculture production systems. Governments encourage building indoor farms along with other initiatives to overcome this problem, which in turn is expected to spur the market growth. 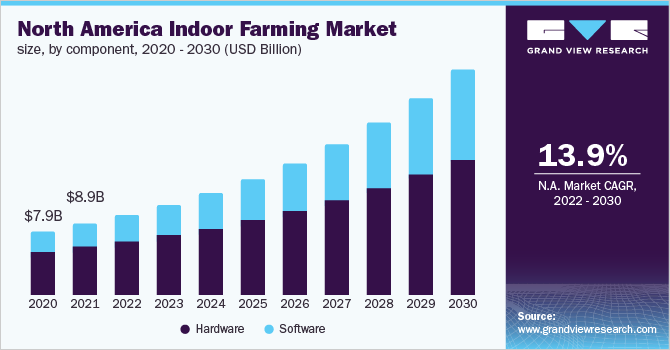 According to The World Bank Group, the overall arable land per capita has declined from 0.197 hectares in 2013 to 0.192 hectares in 2016. The scarcity of arable land owing to land degradation has urged the farmers to adopt new solutions to produce fresh food. The adoption of vertical farming techniques is expected to enable indoor farm owners to grow crops indoor in layers, stacked on racks, in a multi-story building, or a warehouse. This is anticipated to emerge as a significant trend in the market by 2025.

Indoor farms help grow the total crop yield per unit area by using the stacked layers of potted seeds, which is anticipated to drive the market. Indoor farming is a practice of growing plants or crops indoor on a small as well as large scale. Indoor farming implements methods such as aquaponics and hydroponics and utilizes artificial lighting for adequate light levels and nutrients. However, the high initial investment in the building of indoor farms and limitations on the growing variety of crops is expected to hinder the market growth.

Europe held the largest market share in 2018, owing to the adoption of technologies pertaining to greenhouses and vertical farms. Developed countries such as U.K, Netherlands, U.S., and Canada are the rapid and early adopters of farming technologies. However, emerging economies such as India, China, Mexico, and Singapore are observing a substantial growth in the adoption of technologies integrated into indoor farms, owing to the rising demand for fresh crops. The increasing disposable income and urban population in the emerging economies have increased the consumption and demand for healthy, fresh, and nutritious food, which is projected to drive the indoor farming market.

The farmers are adopting emerging techniques, such as greenhouses and vertical farming to increase crop production in order to meet the rising food demand. The greenhouses facility type held the dominant market share of over 70% in 2018. A greenhouse- also called a hothouse-is a closed structure made up of transparent material and used to grow plants, crops, and flowers. In greenhouses, climatic conditions are controlled to enhance quality as well as quantity of produce. Greenhouses also facilitate higher yield production than traditional farming techniques.

The vertical farm segment is expected to exhibit the fastest CAGR of over 18% from 2019 to 2025, owing to the growing adoption of environmentally-friendly production of fruits and vegetables. Besides, the changing food purchasing behavior of consumers resulting in an increasing demand for organic food is expected to drive the demand. Indoor farming protects crops from intense weather conditions through the usage of techniques, such as the controlled environment agriculture technology, where the facilities use control of light, artificial environmental monitoring, and fertigation.

The hardware segment dominated the market in 2018 and is expected to remain dominant over the next six years, as hardware plays a significant role in maintaining the environment of the indoor farms. The segment is further categorized into climate control systems, lighting systems, sensors, and irrigation systems, which enables the cultivation of indoor-grown crops. The climate control system is expected to be the fastest-growing segment over the forecast period, as the system creates an environment conducive to plant growth. The system helps control the indoor climate with chillers, heaters, air-conditioning units, humidifiers, and air movement fans, among others.

On the other hand, the software segment is expected to exhibit a CAGR exceeding 9% over the next six years, owing to the upcoming trends in technologies and farming practices. The software traces the fruit and vegetables back to a grower, crop batch/patch, area of land/field, and supplier details. The segment has been further bifurcated into the web-based and cloud-based software. The cloud-based software segment is estimated to register significant growth in the forthcoming years, as it collects millions of data points in real-time, which can be examined with machine learning techniques to determine the changes in particular environmental parameters affect the yield and taste of the final produce.

The fruits, vegetables, and herbs segment dominated the market for indoor farming in 2018 and is estimated to continue leading over the forecast period. The increasing production of commonly grown fruits, vegetables, and herbs such as tomato, lettuce, leafy greens, cucumber, bell and chili peppers, is driving the segment growth. These crops are grown on a large scale and deliver maximum profit from their cultivation to the companies involved in the production of the crops. Tomato is the major cultivated crop owing to its rapid cultivation rate and held the largest market share in 2018. 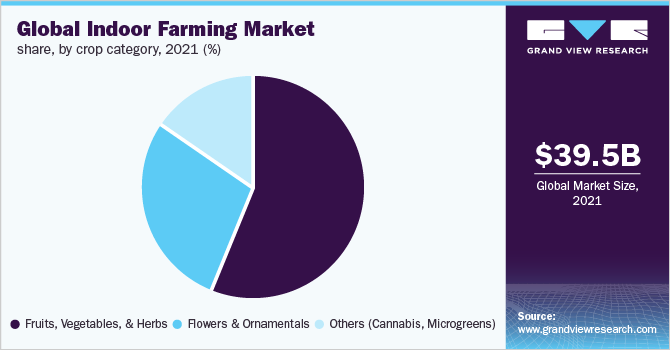 Europe held the largest market share in 2018 and is estimated to remain dominant during the forecast period. Rising adoption of technologies pertaining to indoor farms, such as Controlled Environment-Agriculture (CEA) that control the environmental factor, is responsible for regional growth. Increasing focus on adopting technologies, such as Active heat systems and LEDs to improve the yield is driving the market. The region accounted for a 32% share of the global market for indoor farming. Several initiatives by the regional governments for building indoor farms in order to overcome challenges, such as growing population, climate change, food production in an environmentally-unfriendly way. The farm owners are at the forefront in investing in technologies such as LED lighting and crop monitoring sensors, which are expected to lower the labor cost.

Asia Pacific is estimated to witness the fastest CAGR of over 8% from 2019 to 2025. Countries such as China and Japan are estimated to witness considerable growth in the forthcoming years owing to the presence of a large number of indoor farms. In addition, the continuously rising population in the region has resulted in an increasing demand for organic food, which has led to the building of greenhouses as well as vertical farms to produce crops. The rising awareness about the significance of alternative farming owing to less availability of fertile agricultural land is expected to further fuel regional demand.

The companies focus on building greenhouses and expanding indoor farms to meet the end-market requirements. For instance, Richel Group announced the design of a multi-span greenhouse in Mexico. The greenhouse is designed to meet the demands of the growers for the broader structures. The structure is favored owing to its optimal light transmission, circulation inside the structure, ease of air movement, and better climate control.

This report forecasts revenue growth at the global, regional, and country levels and provides an analysis of the latest industry trends and opportunities in each of the sub-segments from 2014 to 2025. For the purpose of this study, Grand View Research has segmented the global indoor farming market report on the basis of facility type, component, crop category, and region:

How big is the indoor farming market?

What is the indoor farming market growth?

Which segment accounted for the largest indoor farming market share?

b. Europe dominated the indoor farming market with a share of 32.4% in 2019. This is attributable to the increasing focus on adopting technologies such as active heat systems and LEDs to improve the yield.

Who are the key players in indoor farming market?

What are the factors driving the indoor farming market?

b. Key factors that are driving the indoor farming market growth include rising population and consequent increase in the food demand worldwide.