Major players such as Shire; AbbViee Inc.; Celgene, Eli Lilly and Company; Pfizer Inc.; and Gilead Sciences are involved in research and development to introduce and commercialize better versions of existing products. Pipeline products such as Upadacitinib, Ozanimod, and Risankizumab are estimated to have better mechanism of action and efficacy. 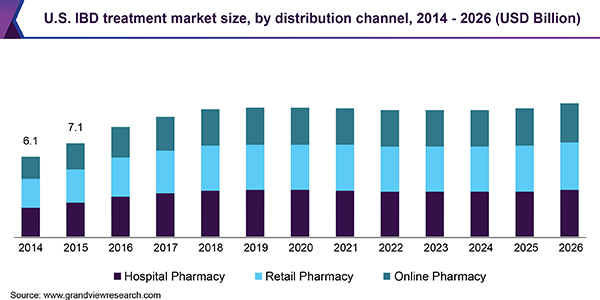 Emergence of biosimilars is also one of the major factors governing the overall market. Biosimilars are expected to be less costly than biologics, making them more accessible in developing countries. The expected patent expiration of some of the drugs is one of the factors responsible for the launch of new biosimilars.

For instance, in 2016, the U.S. FDA approved a biosimilar Inflectra, which is similar to Remicade with lower competitive pricing. Remicade, a biologic drug manufactured by Janssen Non-surgical and approved in 1998, is majorly used for the treatment of Crohn’s disease and ulcerative colitis.

Crohn’s disease and ulcerative colitis are two major types of IBDs. Crohn’s disease was the largest segment in 2018 due to increasing prevalence of the condition. According to an article published in the Jobson Medical Information LLC, in 2018, the incidence of CD was found to be around 3.1 to 14.6 cases per 100,000 person every year and the prevalence was approximately 201 cases per 100,000 adults in U.S.

Ulcerative colitis is estimated to be the fastest growing segment over the forecast year owing to presence of strong pipeline products for its treatment. Moreover, increasing involvement of key players in product development related in the field is anticipated to drive the segment. In March 2019, Johnson & Johnson Services Inc. announced new data from its Phase III UNIFI study showing positive results of STELARA in adults suffering from moderate to severe ulcerative colitis.

On the basis of route of administration, the IBD treatment market is segmented into oral route and injectables. Injectables are considered to be the largest segment owing to their efficacy. In addition, emergence of biosimilars such as Inflectra is expected to fuel segment growth. This segment is further divided into IL inhibitors, TNF inhibitors, and anti-integrin. TNF-inhibitors was the largest sub-segment in 2018.

Oral route is estimated to be the fastest growing segment over the forecast period due to presence of strong pipeline products. The oral segment is further segmented into ASAs, corticosteroids, and JAK inhibitors. ASAs dominated the market in 2018 and JAK inhibitors are estimated to be the fastest growing sub-segment over the forecast period.

Based on distribution channel, the inflammatory bowel disease (IBD) treatment market is segmented into hospital pharmacy, retail pharmacy, and online pharmacy. The hospital pharmacy segment, which includes both in-patient and out-patient, dominated the market with a share of 36.6% in 2018. Increasing prevalence of Crohn’s disease and ulcerative colitis has led to an increase in the total number of hospitalizations worldwide. 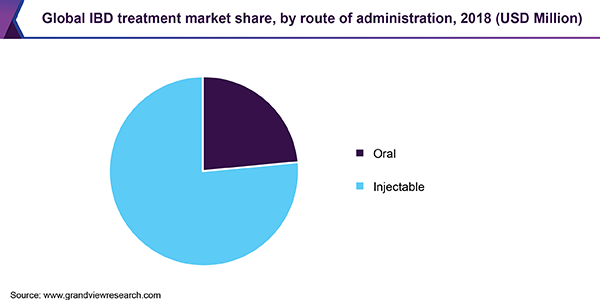 Online pharmacy is estimated to be the fastest growing segment over the forecast period. The trend of online purchasing and the demand for it is growing due to comfort, flexibility, and convenience, which is increasing the revenue generated by this segment. Moreover, online shopping offers various discounts, which additionally benefit customers. These factors are expected to boost the demand for online pharmacies over the forecast period.

North America led the market in 2018 owing to presence of key companies and well-established healthcare infrastructure. The region is projected to maintain its dominance during the forecast years on account of increasing geriatric population base and prevalence of ulcerative colitis and Crohn’s disease.

According to an article published in the Jobson Medical Information LLC, in 2018, the incidence of CD was found to be around 3.1 to 14.6 cases per 100,000 person every year and the prevalence was approximately 201 cases per 100,000 adults in U.S. Asia Pacific is estimated to be the fastest growing regional segment over the forecast period due to rising product approvals.

For instance, in 2017, Janssen Biotech, Inc. entered into a strategic agreement with Protagonist Therapeutics, Inc. to develop, manufacture, and market PTG-200, an oral IL 23 receptor for the treatment of inflammatory bowel disease. In 2018, Pfizer Inc. received marketing authorization of XELJANZ from the European Union for the treatment of moderate to severe ulcerative colitis.

This report forecasts revenue and volume growth at global, regional, and country levels and provides an analysis of latest industry trends in each of the sub-segments from 2014 to 2026. For the purpose of this study, Grand View Research has segmented the global inflammatory bowel disease treatment market report on the basis of type, route of administration, distribution, and region: