The global inflatable pet collars market size was valued at USD 72.6 million in 2019 and is expected to grow at a compound annual growth rate (CAGR) of 5.0% from 2020 to 2027. Higher attention towards pet’s welfare, coupled with increasing spending on pets by consumers, is driving the attention towards various pet safety products, which, in turn, is boosting the demand for inflatable pet collars among pet owners. Moreover, a greater understanding of the potential negative effects of Elizabethan collars or e-collars on pets is triggering the growth of the market. An inflatable collar has similar attributes of an airplane pillow, which prevents pets from licking by greatly reducing the mobility of their heads. These are lightweight and soft products, which allow pet animals with greater visibility compared to traditional cones. 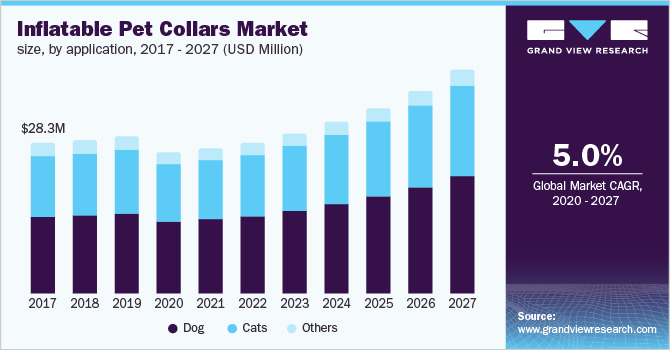 While e-collars block all the peripheral vision, it may lead to negative welfare impacts on pets, such as self-trauma, discomfort, injury, and mishaps. Whereas, inflatable pet collars are more durable, adjustable, soft, and comfortable, economical, easy to clean, and are available in varied sizes and colors. In addition, an increasing number of pet ownerships among people, particularly across the U.S. and European countries, is driving the need for innovative pet supplies, thereby propelling demand for inflatable pet collars. According to the American Pet Products Association, pet ownership has increased from 56% to 68% in the last 30 years, resulting in 85 million households having a pet in the U.S. in 2018.

Additionally, Regional Animal Services of King County increased the pet adoption rate by 20%, following the connection of 2,992 animals to new families in 2017, compared to 2,467 in 2016. Moreover, amidst the pandemic struck worldwide, people are increasingly investing in pet adoption, thereby widening the scope of pet supplies, such as inflatable pet collars. According to Best Friends Animal Society, a U.S. non-profit animal welfare organization, 62 dogs and cats found foster homes in the period from March 16 to March 20, 2020.

The presence of a large working population across countries compared to historic times has widened the scope of convenient and efficient pet products. As pet owners do not have sufficient time and energy to spend on their pets throughout the day, looking out for them to not lick or bite any injury is having a positive impact on the demand for inflatable pet collars. Thus, rising pet spending is causing manufacturers to innovate on pet care products and focus on their greater well-being. According to the American Veterinary Medical Association, in 2019, overall spending in the U.S. pet industry increased by 4.4% from 2017 to 18.

The dogs application segment held the largest share of 51.8% in 2019. The rising number of pet dogs across households as well as patrol dogs for police work is resulting in greater demand for inflatable pet collars. Moreover, the increasing number of overweight dogs, which are more susceptible to injuries, is driving the adoption of inflatable pet collars among pet owners. According to a blog by USA Today, 55.8% of dogs in the U.S. are overweight. While 35% of dogs in the U.K. are overweight.

The cats application segment is expected to witness considerable growth during forecast years with a CAGR of 5.0% from 2020 to 2027 owing to the increasing adoption of pet cats. There are approximately 370 million cats kept as pets across the globe. According to the American Pet Products Association's 2017-2018 National Pet Owners Survey, there were 94.2 million pet cats in the U.S. across 42.7 million households. Thus, increasing pet adoption, coupled with a high sedentary lifestyle, has widened the scope of comfortable and innovative pet supplies, thereby boosting the demand for inflatable pet collars.

The offline distribution channel accounted for the largest share of 86.7% in 2019. This distribution channel is a well-established route for the manufacturers. A large number of consumers prefer to buy products from brick and mortar stores as they can touch, test, and feel the product before buying it. These are the factors that have been attracting consumers to purchase from offline retail outlets, particularly pet specialty stores. With the help of traditional brick and mortar stores, the retailers have been able to create a high brand value with a unique experience for the customers. The availability of a wide range of products offered by different brands and the ability to compare the prices and product attributes are some of the factors expected to have a positive impact on segment growth. In addition, discounted prices, store credits, and seasonal offers provided by retailers increase the customer footfall in these stores. Moreover, the availability of products at a cheaper rate offered by local manufacturers is likely to attract a greater number of customers to mass merchandisers, club stores, or dollar stores. 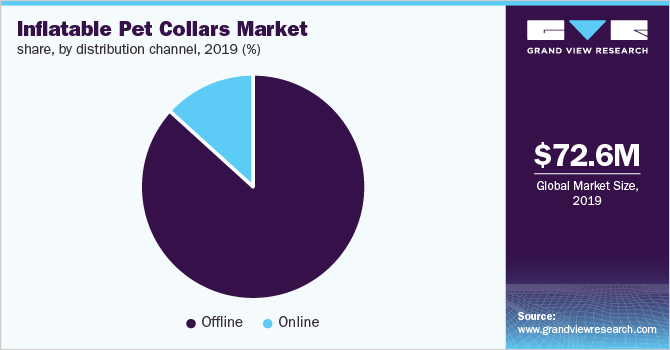 The online distribution channel is expected to witness the fastest growth during forecast years with a CAGR of 5.9% from 2020 to 2027. The rising number of diversified online shopping platforms, such as online retailers and company-owned portals, is fueling the growth of the online distribution channel. The online segment is expected to witness significant growth in the future years due to the increasing number of online shoppers, particularly millennial pet owners who are preferring various e-commerce platforms. In addition, competitive pricing, convenience, and personalization are negatively downsizing the share of offline retail channels.

North America held the largest share of 45.1% in 2019. The U.S. is one of the major shareholders in the market. According to the American Pet Products Association, about 68% of the U.S. households possessed a pet in 2017. Dogs and cats are the most common pets, contributing to more than 80% of the pet population in the nation. Increased inclination towards pet adoption is causing greater movement in the market. Spending on pets has been increasing significantly in the U.S. and was estimated to be over USD 95 billion in 2019 in the U.S. According to the American Veterinary Medical Association, a large number of pet owners are in the rural states of the U.S. Wyoming, Nebraska, West Virginia, Vermont, Indiana, Idaho, Arkansas, Oklahoma, Mississippi, and Colorado have a high penetration of pet ownership in the country.

Asia Pacific is expected to witness the fastest growth during forecast years with a CAGR of 6.2% from 2020 to 2027. Rising disposable income is leading to the increasing adoption of pets in countries, such as China, Indonesia, and India. Moreover, a large number of stray dogs and cats in India get injured in road accidents. This scenario poses a greater potential for the product across the country. According to the Times of India, in September 2019, more than 1000 stray animals were injured in road accidents in Nagpur city of Maharashtra in a period of four months. According to the Nagpur Municipal Corporation, the number of accidents involving stray animals increased by 23% in 2019 from 2014 to 15.

The industry has been characterized by the presence of a large number of international and regional players. Players have been introducing new products in order to gain a competitive advantage in the market. Furthermore, key players are expanding their businesses in emerging markets to capture growth opportunities. Moreover, companies have been partnering with retailers to expand their consumer reach. For instance, Acorn Pet Products brand Calm Paws has paired with various retailers, such as PetSmart, Petco, Amazon, Chewy.com, and Pet Supplies Plus, to sell their products offline as well online. Some of the prominent players in the  inflatable pet collars market include:

This report forecasts revenue growth at the global, regional, and country levels and provides an analysis of the latest industry trends and opportunities in each of the sub-segments from 2016 to 2027. For the purpose of this study, Grand View Research has segmented the global inflatable pet collars market report on the basis of application, distribution channel, and region:

How big is the inflatable pet collars market?

What is the inflatable pet collars market growth?

Who are the key players in inflatable pet collars market?

What are the factors driving the inflatable pet collars market?

b. Key factors that are driving the market growth include higher attention towards petâ€™s welfare coupled with increasing pet spending of consumers is developing higher traction towards its safety products, which is gaining higher demand for inflatable pet collars among pet owners.