The global inhalable drugs market size was valued at USD 25.0 billion in 2018 and is estimated to exhibit a CAGR of 6.3%during the forecast period. Increasing prevalence of respiratory diseases such as Chronic Obstructive Pulmonary Diseases (COPD), asthma, and cystic fibrosis is anticipated to boost the market growth. According to the Centers for Disease Control and Prevention (CDC), more than 25 million people were suffering from asthma in the U.S. in 2017, which amounts to approximately 7.7% of the adult population and 8.4% of children.

Increasing prevalence of non-respiratory diseases such as diabetes and Parkinson’s disease is a key factor expected to fuel the market for inhalable drugs. Parkinson’s disease is widely reported in people aged 60 years and above. The prevalence rate of this disease increases with age. According to WHO, globally, the percentage of individuals aged 60 years and above is likely to increase twofold from 12% in 2015 to 22% by 2050. Therefore, manufacturers are developing inhalable drugs for ease of administration in the geriatric population. For instance, in December 2018, INBRIJA, a prescription medicine containing levodopa, was approved by the USFDA for adults. 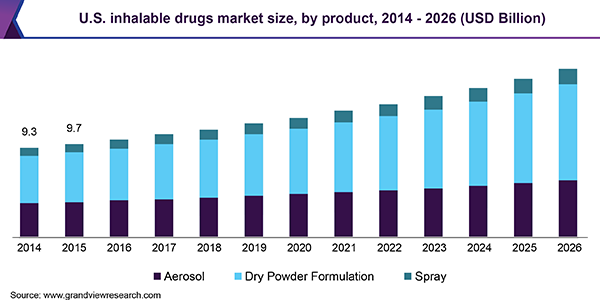 The strong presence of leading players in the field will continue to benefit the global market. These companies focus on unmet market needs, geographic expansion objectives, developing innovative products, and mergers and acquisitions to capitalize their market share. These companies also provide services to various entities in order to improve the quality of drug delivery systems and patient compliance. Moreover, the need for efficient therapies and competition among new market players is expected to provide growth potential in the field of inhalable drugs. Furthermore, these players focus on personnel training and R&D investments to capture a larger share in the market.

The market has been segmented on the basis of product into aerosols, dry powder formulation, and spray. Dry powder formulation dominated the inhalable drugs market in 2018 owing to higher efficacy and better results in comparison with other forms. Furthermore, the presence of a wide range of products and a strong pipeline for this formulation are factors responsible for its dominant market share.

The focus of manufacturers on developing small-sized particle products has increased, which is expected to fuel the market growth during the forecast period. For instance, in April 2019, Cipla launched Niveoli-the first extra-fine particle inhaler developed in India. The inhaler comprises beclomethasone-formoterol and hydrofluoroalkane (HFA), which ensures targeted delivery to small airways in asthma and COPD patients.

Aerosols are expected to witness steady growth over the forecast period owing to their user-friendliness. Players are constantly looking to manufacture inhalable products that are easy to use and effective without being too complicated. For instance, in February 2018, Teva Pharmaceuticals launched the QVAR RediHaler inhalation aerosol in the U.S. as a tool for the management of asthma.

Inhalable drugs are widely used for the treatment of chronic respiratory diseases such as asthma, COPD, bronchospasm, as well as non-respiratory diseases such as diabetes and Parkinson’s disease. Combination therapy of Inhaled Corticosteroid (ICS), Long-Acting Muscarinic Antagonist (LAMA), and Long-Acting β2 Adrenoceptor Agonist (LABA) are extensively used for the treatment of COPDs and asthma due to its effectiveness, ability to reduce inflammation of lungs, and less need for hospitalization.

This has driven many manufacturers to develop combination therapies. For instance, in September 2017, the U.S. FDA approved a combination therapy called Trelegy Ellipta for the treatment of COPDs, chronic bronchitis, and emphysema. This medicine consists of three active molecules-fluticasone furoate (ICS), umeclidinium (LAMA), and vilanterol (LABA).

Due to the rising prevalence of diabetes and the high cost of medications, manufacturers have come up with an inhaler as an alternative therapy with reduced cost. For instance, in January 2019, MannKind Corporation developed and commercialized Afrezza for patients with diabetes. The company started a direct purchase program for inhalable insulin Afrezza for as little as USD 4 per day.

Geographically, the global market has been segmented into North America, Europe, Asia Pacific, Latin America, and Middle East and Africa. North America dominated the overall market in terms of revenue in 2018, followed by Europe. Both the markets for inhalable drugs are fueled by various awareness programs conducted by governments, organizations, and companies to improve treatment options for COPD. For instance, in November 2016, Mylan organized the COPD Awareness Month to raise awareness about various treatments (inhaled and other bronchodilators) and their different dosage forms. 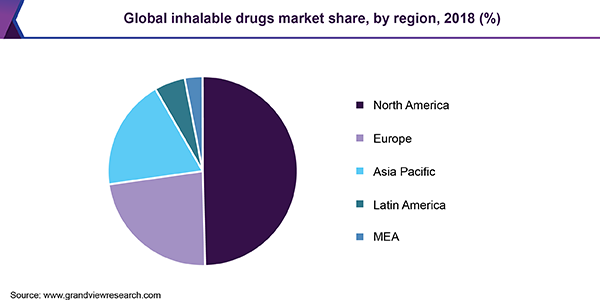 The Asia Pacific market for inhalable drugs is anticipated to be the fastest-growing segment over the forecast period. This can be attributed to factors such as improving healthcare infrastructure, rising patient awareness, and increasing disposable income. Moreover, new market entrants lead to strong competition, which is expected to play an important role in providing a growth platform to this regional market over the next few years. Growing medical tourism in several Asian countries is also attracting the attention of leading global players to set up in numerous emerging economies with significant growth potential.

There are a large number of players operating in the global market. Key companies manufacturing inhalable drugs include AstraZeneca; Sanofi; Vectura; Mylan; GlaxoSmithKline; Mundipharma; Boehringer Ingelheim International GmbH; and Cipla Inc. These players are involved in launching novel products and undertake strategic initiatives to gain a competitive edge. Apart from this, they are also engaged in strategies such as joint ventures, collaborative development, mergers and acquisitions, product expansions, and developments. For instance, in August 2018, Glenmark Pharmaceuticals entered into a licensing agreement to commercialize Tiotropium Bromide dry powder inhaler to treat COPD in Europe.

Companies are focusing on developing inhalable drugs and enhanced versions of already existing molecules. There are more than 220 ongoing projects pertaining to inhalable medicines globally. For instance, Breath Therapeutics’ Boston Program for Bronchiolitis Obliterans Syndrome with Liposomal Cyclosporine A for Inhalation is in Phase III clinical trial, which is likely to be launched during the forecast period.

This report forecasts revenue growth at global, regional, and country levels and provides an analysis on latest industry trends in each of the sub-segments from 2014 to 2026. For the purpose of this study, Grand View Research has segmented the global inhalable drugs market report on the basis of product, application, and region: