The global insect repellent market size was valued at USD 3.6 billion in 2018 and is expected to expand at a CAGR of 7.0% over the forecast period. Growing consumer awareness regarding insect-borne diseases due to increasing waste from households or commercials is anticipated to propel the market growth in the forecast period. 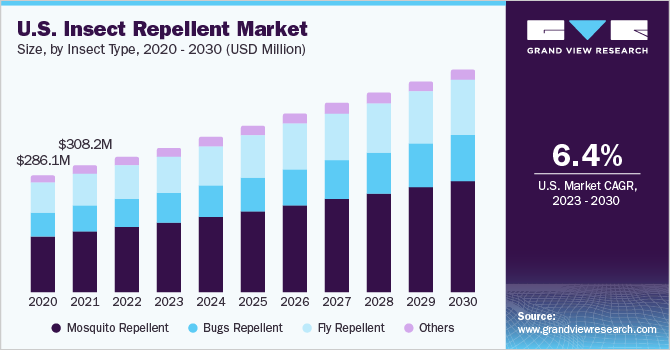 Furthermore, rising insect-borne diseases due to an increasing number of mosquitoes have impacted the market growth to a great extent. Regions such as North America, Asia Pacific, and Europe have witnessed a large number of cases of dengue, malaria, and chikungunya. For instance, according to a survey, the number of cases has increased to 2 million in 2017 from 2016 across the countries. Increasing global warming has also led to a rise in insect-borne diseases due to an increase in the number of insects. This, in turn, increases the demand for the repellent.

Government initiatives in order to control the effects of insects in the surroundings are also likely to impact market growth in the forecast period. For instance, the government has come up with integrated pest management that aims at keeping the pests under economic level. An increase in the number of global waste is also impacting market growth as it leads to an increase in the number of insect-borne diseases. For instance, according to the WHO, the global waste is anticipated to grow by 70.0% by 2050.

Growing awareness regarding the benefits of insect repellents, particularly in rural areas, is driving the market in the forecast period. In the recent past, the traditional methods of preventing themselves from insects have been replaced with new insect repellents available in the market. In urban areas, an increase in demand for natural and herb-based insect repellents is fueling the market growth. Manufacturers are coming up with various integrations in the products.

For instance, Dabur has come up with herbal cream for mosquito repellent, which is good for skin as well. Although, some products such as sprays have adverse effects on health due to the content of deet in them. Products such as repellent liquids also have some negative effects on health. According to a report, 11.8% of the people reported different health problems such a breathing problems, itching in eyes, and headaches after using insect repellents. Manufacturers are coming up with various different products that are reducing the harmful effects of the repellents. This, in turn, is anticipated to boost the insect repellent market growth significantly in the forecast period.

On the basis of the product type, vaporizers accounted for the largest share of 29.7% in 2018. Vaporizers help reducing insect counts and they contain perfume that prevents humans from not get impacted by its effect. The integration of herbal ingredients in the product is also likely to fuel the segment growth in the forecast period.

The spray is expected to expand at the fastest CAGR of 7.5% in the forecast period. Wide application of the product ranging from mosquito repellent to bugs and fly repellent has made it popular among the consumer group. The spray helps to get rid of insects present in the pipeline of kitchens and washrooms and is more effective as compared to liquids. The main reason for its lower market share is that people feel uncomfortable for a while after spraying.

On the basis of product type, the global market is segmented into mosquito, bugs, and fly repellents. Mosquito repellent accounted for the largest share of 51.5% in 2018 and is expected to witness significant growth in the near future. The main reason behind segment growth is the rise in the number of mosquito-borne diseases such as malaria and dengue due to increasing global warming. Stagnant water is also one of the major causes of mosquito-borne diseases, thus propelling the segment growth in the forecast period. 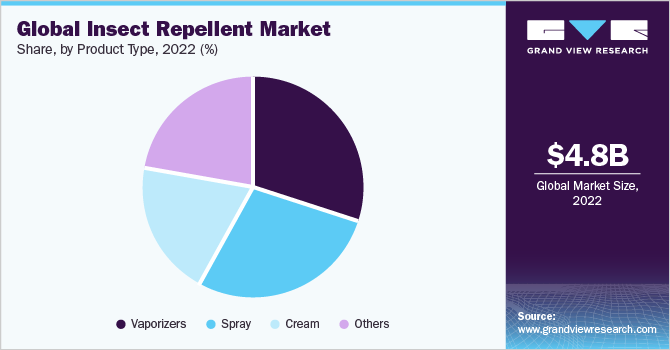 Bugs repellent is anticipated to expand at a CAGR of 6.9% in the forecast period. The major cause of the segment growth is the increasing number of bed bugs and cockroaches. It has been noted that the number of bed bugs has increased drastically in the last few years and is increasing at an average rate of 50.0% every year. Cities such as New York and Washington are facing such problems and thus demand for repellents has increased in the region. An increasing number of cockroaches in household kitchens, as well as restaurants, is also likely to drive the segment in the forecast period.

In 2018, Asia Pacific led the market with a share of 40.0% and is anticipated to witness significant growth in the near future. In Asia Pacific, India contributes to a majority of share and is expected to register a CAGR of 8.9% over the forecast period. Introduction of different varieties of the product, its adoption by the consumers due to rising awareness about different benefits, and the increasing number of insect-borne disease have driven the market in the region.

MEA emerged as the second-largest regional market for the product and accounted for 18.0% share of the overall revenue in 2018. In the major part of Africa, an increase in the number of vector-borne diseases, which are caused by pathogens, has been reported. The government is taking necessary steps in order to overcome the problems in Africa as well as other Middle East countries. These factors are anticipated to boost the market growth in the region in the coming years.

Reckitt Benckiser Group, The Godrej Company, Dabur International, Coglans Ltd., S.C Johnson & Son, Johnson and Johnson, Spectrum Brands, Jyothi Labs, Swayer Ltd., and Himalaya Herbals are some of the major players in the industry. The main aim of these manufacturers is to increase awareness about the benefits of the product among the consumer group and come up with different integrated products in order to reduce the harmful effect of the repellents.

Advertisements and paid promotions play an important role in the industry. For instance, Godrej has launched its new lime flavor mosquito hit that eventually kills mosquitoes without even changing the aroma of the place. Moreover, it has advertised its product odomos as a cream that repels the mosquitoes even in the outer environment.

This report forecasts revenue growth at the global, regional, and country levels and provides an analysis of the latest industry trends in each of the sub-segments from 2015 to 2025. For the purpose of this study, Grand View Research has segmented the global insect repellent market report on the basis of product type, insect type, and region:

How big is the insect repellent market?

What is the insect repellent market growth?

Which segment accounted for the largest insect repellent market share?

b. Asia Pacific dominated the insect repellent market with a share of 40.16% in 2019. This is attributable to the adoption of differnt products by the consumers due to rising awareness about different benefits, and increasing number of insect borne disease.

Who are the key players in insect repellent market?

What are the factors driving the insect repellent market?

b. Key factors that are driving the market growth include growing consumer awareness regarding insect borne diseases due to increasing waste from household or commercials and government initiatives in order to control the effects of insects in the surroundings.