There has been a significant paradigm shift in the treatment of autoimmune diseases over the last few decades. The preference for targeted therapies is increasing due to their improved safety and efficacy profiles. Patent expiry and increased adoption of biosimilar in Tumor Necrosis Factor (TNF) inhibitors has raised the growth potential of the market. 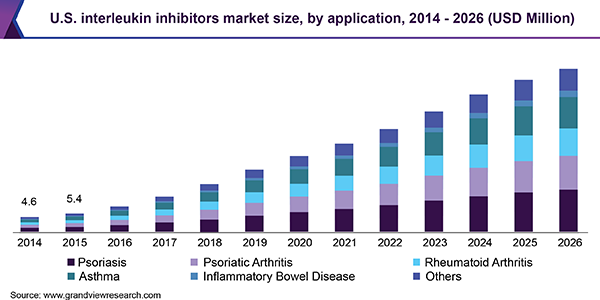 Demand is likely to be fueled by the impending launches of late-stage pipeline candidates. Label expansions of marketed products, such as Actemra for juvenile idiopathic arthritis and Dupixent for atopic dermatitis, are expected to further drive penetration. In addition, positive outcomes from ongoing clinical trials indicate the high growth potential of the IL inhibitors market.

IL-23 dominated the interleukin inhibitor types, largely driven by the blockbuster drug Stelara. Recent additions were made to the segment of Tremfya in 2017, Ilumya in 2018, and Skyrizi in 2019. Although Stelara continues to generate high revenue despite nearing patent expiry in 2023, the IL-23 segment is anticipated to witness strong growth driven by the anticipated new entrants. 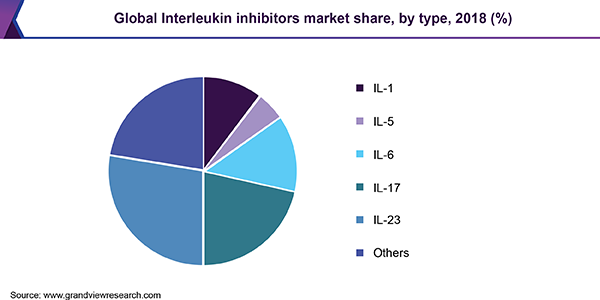 IL-17 is estimated to be the fastest growing segment over the forecast period, which can be attributed to the high sales of Cosentyx and Taltz. Cosentyx became a blockbuster drug in 2017, its third year of launch, while Taltz is expected to cross USD 1 billion sales in 2019. In addition, the recent launch of Siliq and the impending approval of bimekizumab are expected to have a positive impact on the growth of IL-17.

North America accounted for more than 70.00% share in 2018, owing to strong commercial sales of interleukin inhibitors in the U.S. Some of the other factors contributing to the growth are proactive government initiatives, increase in healthcare expenditure, and local presence of key manufacturers.

Asia Pacific is projected to observe the fastest growth throughout the forecast period. Economic development, improvement in healthcare infrastructure, increase in disposable income, and a rise in consumer awareness are likely to contribute to regional growth. Emerging countries, such as China, India, and South Korea, are expected to exhibit strong growth.

This report forecasts revenue growth at global, regional, and country levels and provides an analysis on the latest industry trends in each of the sub-segments from 2014 to 2026. For the purpose of this study, Grand View Research has segmented the global Interleukin (IL) inhibitors market on the basis of application, type, and region: