The global intravenous infusion pumps market size was valued at USD 4.6 billion in 2020 and is expected to expand at a compound annual growth rate (CAGR) of 7.9% from 2021 to 2028. Intravenous infusion pumps are in extensive use in clinical settings such as hospitals, nursing homes, and in the home. These pumps are operated by the trained operator by programming the rate and duration of fluid delivery by means of built-in software to deliver nutrients, hormones, antibiotics, chemotherapy drugs, and pain relievers. 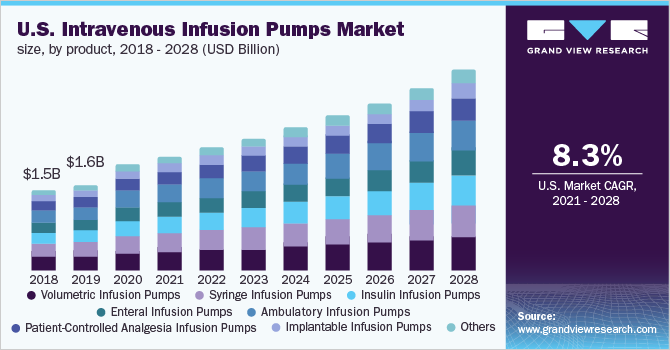 Chronic diseases are the major cause of disability and deaths around the world and 80% of deaths due to chronic diseases occur in low- and middle-income countries. Chronic diseases include cardiovascular diseases, stroke, cancer, chronic respiratory diseases, and diabetes, wherein cardiovascular disease is the major cause of deaths globally, according to WHO. The prevalence of cancer has increased drastically, raising the global burden to 18.1 million cases in 2018, as stated by NCBI. Such diseases have become a major public health concern and need a quick and regulated mode of treatment. The rise in incidences of diseases such as cardiovascular and cancer has led to an increase in demand for intravenous infusion pump devices.

The possibility of medication errors exists because of an increasing disease burden. Hence, there is a need for advanced delivery systems that are more safe, efficient, and standardized. The introduction of smart intravenous infusion pumps or next-generation intravenous pumps is imparting greater growth opportunities for the overall market. Smart pumps are intelligent intravenous infusion devices that are embedded with a computer software system aimed at decreasing drug dosing errors through the presence of drug libraries ensuring safe medication administration.

The applications of these intravenous pumps in intermittent therapy for delivery of antibiotics or continuous infusion therapy for the delivery of chemotherapeutic medications are very prominent. According to NCBI, the use of ambulatory pumps is common and will continue to grow annually. Factors such as the rising geriatric population, the prevalence of chronic diseases, and low cost are likely to propel the market. Moreover, a rise in the number of individuals undergoing surgeries globally for cosmetic, cancer, cardiovascular, or other ailments is likely to have a positive impact on market growth.

According to the International Diabetes Federation (IDF), nearly 463 million adults were living with diabetes across the globe in 2019 and this number is anticipated to reach 700 million by 2045. With the growing prevalence of diabetes, devices such as insulin infusion pumps come in handy for people who self-administer insulin on daily basis. An insulin pump is a small computerized device that provides continuous delivery of short-acting insulin through a thin tube and substitutes the need for a long-acting one. Insulin pump also replaces the need for multiple daily injections with a continuous insulin infusion.

Lately, smart pumps with controlled IV medication and error-prevention software are widely used as these intravenous pumps are equipped with advanced features like the drug libraries, which help in storing the amount of the medicated fluid given to the patient, and its barcode technology, which helps in the verification of a patient’s identity and also helps prevent drug administration errors.

The Paediatrics/Neonatology segment was identified as the largest segment with 27.0% revenue share in 2020 followed by gastroenterology. On the basis of disease indication, the market has been segmented into chemotherapy diabetes, gastroenterology, analgesia/pain management, pediatrics/neonatology, hematology, and others.

According to NCBI, 85.29 million cases relating to digestive disorders were diagnosed in 2017, and the number is expected to increase gradually over the coming years. The leading GI-based cause of death has been colorectal cancer, followed by pancreatic cancer and hepatobiliary neoplasms. The statistical analysis carried out by NCBI revealed that the disease is more prevalent in females and is associated with risk factors such as negative diet choices, high consumption of spicy food and/or fermented food, smoking, consumption of alcohol, and unsanitary living conditions. 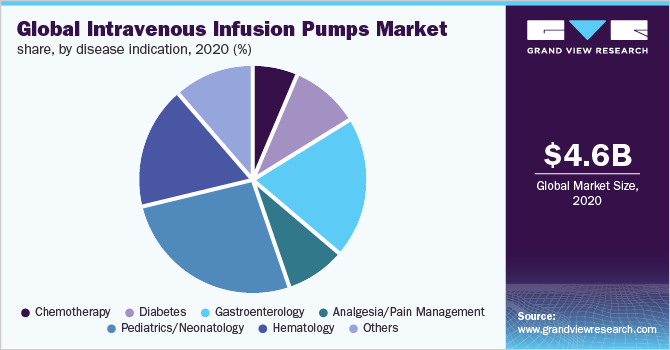 Neonatology is a branch of medicine that deals with infants born in/with acute conditions, including prematurity, low birth weight, intrauterine growth restriction, congenital malformations (birth defects), sepsis, pulmonary hypoplasia, or birth asphyxia. According to WHO, 15 million babies are born preterm, which is a leading cause of newborn deaths in the world. The number of babies born preterm can be reduced by nearly three quarters with feasible, cost-effective care and proper nutrition in the initial stages after birth.

North America dominated the intravenous infusion pumps market and accounted for the largest revenue share of 49.3% in 2020. The segment is expected to maintain its growth rate over the forecast period. This can be attributed mainly to factors such as developed medical infrastructure, high chronic disease burden, and advancements in infusion technology. Moreover, factors such as favorable insurance and medical device reimbursement policies, strong local presence of key manufacturers, and major exporters of intravenous infusion pumps are likely to propel the regional market over the coming years.

In Asia Pacific, the market is expected to witness the highest CAGR of 8.4% over the forecast period. This can be attributed to the increasing burden of chronic diseases such as cancer and diabetes, growing number of surgical procedures performed, rapid adoption of innovative medical devices, and the regional presence of major global players. These factors are expected to create lucrative opportunities in Asia Pacific’s market over the forecast period.

The market for intravenous infusion pumps is highly competitive. Key factors driving the competitiveness among market players are the shift in technology, automation, and standardized dosing and the extensive adoption of advanced healthcare technology for improved healthcare services. Major players often opt for geographical expansion in order to retain market share. In addition, companies are adopting strategies such as mergers, acquisitions, and new product launches to widen their product portfolio. For instance, in April 2021, Medtronic announced the launch of its extended infusion set in select European countries. This infusion set can be worn for 7 days, thereby enabling patients suffering from diabetes to stay on intravenous infusion pump therapy with fewer insertions and interruptions. Some of the prominent players in the intravenous infusion pumps market include:

This report forecasts revenue growth at global, regional, and country levels and provides an analysis of latest industry trends in each of the sub-segments from 2016 to 2028. For the purpose of this study, Grand View Research has segmented the global intravenous infusion pumps market report on the basis of product, disease indication, and region:

How big is the intravenous infusion pumps market?

b. The global intravenous infusion pumps market size was estimated at USD 4.6 billion in 2020 and is expected to reach USD 4.9 billion in 2021.

What is the intravenous infusion pumps market growth?

b. North America dominated the intravenous infusion pumps market with a share of 49.3% in 2020. This is attributable to increasing number of surgical procedures performed, well developed & increasing R&D, and escalating adoption of advanced technology in infusion pumps.

Who are the key players in the intravenous infusion pumps market?

What are the factors driving the intravenous infusion pumps market?

b. Key factors that are driving the intravenous infusion pumps market growth include increased incidences of chronic diseases, rapid flourish seen in the geriatric population, rising surges for ambulatory infusion pumps, and the burgeoning number of people undergoing surgical procedures.