The global integrated pest management pheromones market size was valued at USD 743.1 million in 2019 and is expected to expand at a CAGR of 7.4% from 2020 to 2027. Growing awareness regarding food security and concerns over the ill effects of synthetic crop protection chemicals are expected to drive the market. Integrated pest management (IPM) pheromones are considered clean and eco-friendly as compared to pesticides. 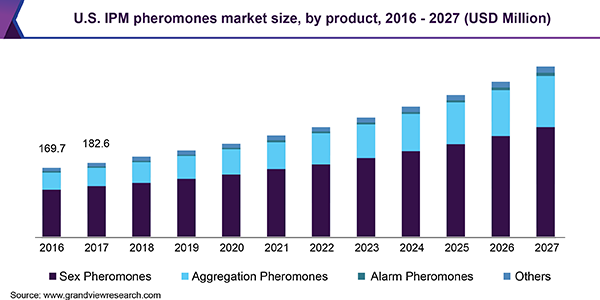 IPM pheromones belong to the category of products that are used to trap, catch, or kill pesticides, mainly during agricultural activities. They are insect secretions used to communicate and trap other pests. They are classified under the semiochemicals category, which are the chemicals that convey signals from one organism to the other in order to modify the behavior of the recipient organism.

Globally, North America is the largest regional market in terms of consumption of IPM pheromones on account of significant demand from U.S. Sex pheromones emerged as the leading integrated pest management pheromone in the U.S. and accounted for a share of 67.2% in 2019.

The U.S. government is taking initiatives to improve the agriculture sector of the country, which is anticipated to boost the demand for IPM pheromones. The Federal IPM Coordinating Committee was established in 2001 by the United States Department of Agriculture (USDA) that provides interagency guidance on integrated pest management policies, programs, and budgets. The USDA is also taking up an initiative to implement pest management on farms, homes, landscapes, and other structures. The goal is to implement integrated pest management practices on about 75% of the nation’s crop production. U.S. is also one of the major exporters of agricultural products and hence farmers and the government organizations are focusing on the development of sustainable farming techniques.

Penetration of IPM pheromones in developing agro-economies, such as India, China, Brazil, and Thailand, is less as compared to other pesticides. It is one of the major factors restraining market growth. The long-term usage of pesticides, along with their effective results, restricts the adoption of new techniques by farmers. Governments across the globe are undertaking initiatives to educate farmers and cultivators regarding the benefits of IPM pheromones.

A significant obstacle in the large-scale implementation of IPM pheromones is its restricted use as an insecticide for specific targets. In the crop protection scenario, insecticide application is known to affect non-targeted species to a large extent. To target a wide number of species, suppliers of IPM pheromones need to extensively invest in R&D activities to identify and target different pests.

Sex pheromones are primarily extracted from female insects to attract males for mating as they deposit larvae eggs on crops, which then feed on crops, thereby negatively impacting yield. The Codling Moth Areawide Management Program (CAMP) was one of the first programs initiated in 1995 by USDA for the control and management of Cydia Pomonella by mating disruption. It was undertaken to reduce the usage of conventional insecticides by 80% in five years.

Alarm pheromones exhibit low penetration and are anticipated to register a moderate CAGR of 5.5% from 2020 to 2027. These pest management pheromones are emitted by insects in response to approaching predators or rapid changes in the immediate environment. They are not useful in removing pests from a food source as they can only deter insects from reaching.

The application modes of pheromones include monitoring & detection, mass trapping, mating disruption, and others such as push-pull strategy and biological control. Mating disruption was the prominent application segment in 2019 with a share of 41.19%. In this integrated pest management technology, male insects are confused by producing artificial dispensers, which delays their mating and reproduction of pests.

Sex pheromones are largely used in mating disruption activities due to their ability to disrupt the behavior of male insects affecting the development of moths. However, one of the major disadvantages of mating disruption is that it is a targeted pest management technique and can only be used for certain species of moths. Mating disruption turns out to be ineffective in areas where the population of moths is too high. 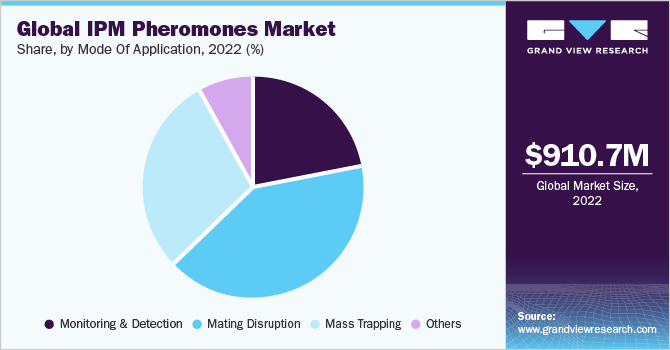 Monitoring and detection is anticipated to expand at a CAGR of 7.4% over the forecast period. This application technique is considered to be an initial step of pest management as it helps in analyzing the type and quantity of pests in the field. It is also considered to be one of the early warning detection programs, where monitoring logs are used to analyze the data regarding pests.

Inadequate knowledge among the farmers about the appropriate use of IPM pheromones is affecting the product demand. However, outreach programs undertaken by the local governments are increasing the awareness regarding the benefits of IPM pheromones among the farmers of developing countries, such as China, India, and Indonesia. This is eventually fueling the product demand in the agricultural sector.

North America was the largest regional market for integrated pest management (IPM) pheromones, accounting for a 40.59% share of the overall revenue in 2019. Demand for IPM pheromones appears to be gaining ground in the agriculture sector of the region as farming has become mechanized and heavily dependent upon an integrated system for supporting agribusinesses.

Farmers in North America have started adopting improved technologies, such as IPM, chemical and biofertilizers, and grain elevators. Growing need for effective pest management techniques to develop specialized crops has compelled many farmers to adopt integrated pest management programs for crop protection. Adoption of the precision farming initiative by the federal government in Canada to develop ecological and economy friendly methods is expected to provide avenues for the market over the forecast period. Under Budget 2017, the Canadian government allocated USD 70 million to support innovation in the agriculture and food industry. An additional investment of USD 25 million in agricultural technologies was also approved under budget 2017.

Europe is the second largest market and is anticipated to exhibit a CAGR of 6.8% from 2020 to 2027 due to rising demand in countries, such as Spain, Italy, and the UK. The government bodies in the country are adopting several environmental quality objectives that are aimed at promoting biodiversity, which includes stringent regulations against pesticides.

Key players operating in the market are currently focusing on increasing product awareness by enhancing their footprint, innovation, product varieties, and R&D activities. Factors such as increasing demand for food crops and rising awareness about sustainable methods for pest management are expected to drive the market. Some of the major market players are Active IPM, Russell IPM, and AgbiTech.

A large number of companies are focusing on obtaining government approvals for the application of the product. Regulatory approval forms an important component of the market competition. Industry participants are making significant investments in new product development to target new regions and improve their offering.

This report forecasts revenue growth at the global, regional, and country levels and provides an analysis on the latest industry trends and opportunities in each of the sub-segments from 2016 to 2027. For the purpose of this study, Grand View Research has segmented the global integrated pest management pheromones market report on the basis of product, mode of application, application, and region:

How big is the ipm pheromones market?

What is the ipm pheromones market growth?

Which segment accounted for the largest ipm pheromones market share?

b. North America dominated the IPM pheromones market with a share of 40.3% in 2019. This is attributable to high dependence on integrated system for supporting agribusinesses.

Who are the key players in ipm pheromones market?

What are the factors driving the ipm pheromones market?

b. Key factors that are driving the market growth include rising awareness about benefits of IPM Pheromones and growth in commercial agriculture.