Global isobutanol market size was estimated at 552.4-kilo tons in 2014. It is used as a raw material for the production of various chemicals including cleaners & coating solvents, isobutyl esters, extractant for pharmaceutical products, textiles, cleaners & polish additive, a gasoline additive, agricultural chemicals, and biofuel. Intrinsic properties associated with the product including limited miscibility and medium volatility is expected to drive its demand over the forecast period.

The chemical has also emerged as a major platform chemical for producing isobutyl acetate. Isobutyl acetate is widely used in the production of coatings and as a flavoring agent in the food industry. Growing processed foods industry in various emerging economies including China, Brazil, India, and Mexico is anticipated to drive isobutyl acetate demand. This factor, in turn, is projected to have a positive effect on isobutanol market growth.

Among the several industries driving economic growths of various regions, the construction sector has been a key contributor which is observed to be gaining momentum since 2018. The trend is likely to remain unchanged till 2022 with several construction projects in the pipeline across North American and European regions. With the advancement in globalization, several tech giants are expanding their world-class facilities across the world. This in turn has generated demand of isobutanol in the formulation of solvents & coatings for the construction sector.

Fluctuations in the crude oil prices are anticipated to hinder petroleum-derived product demand in the future. Extensive R&D by some of the major industry participants has led to the commercialization of isobutanol production through biological fermentation which can be used in jet fuel. The product is used in renewable jet fuel for low carbon footprints and cleaner burning. Isobutanol as a biofuel is preferred over ethanol owing to higher energy density and meets EPA emission targets.

Synthetic isobutanol was the leading product segment with a demand share exceeding 55% of total volume in 2014. Growing product demand across myriad applications including solvents & coatings and petrochemicals particularly in emerging markets such as India and China is expected to drive industry growth over the foreseeable future.

Bio-based isobutanol is anticipated to be the fastest-growing product segment over the next seven years. Favorable government policies supporting environmental friendly chemical production in mature economies of Europe and North America may be attributed to the rapid growth. The segment is estimated to grow at a CAGR of over 7.0% from 2015 to 2022.

Growing environmental concerns regarding synthetic isobutanol have contributed to the growth of bio-based alternatives. Growing R&D spending in this area is projected to create immense opportunities for industry participants over the forecast period. The bio-based product has large addressable markets including marine fuels and gasoline blendstocks as it is preferred over ethanol.

Chemical intermediates were the largest application segment and accounted for over 45% of total market volume in 2014. The segment is anticipated to witness rapid growth over the next seven years on account of the rising requirement of these intermediate chemicals in various end-use industries including automotive and construction.

Oil & gas is anticipated to witness the fastest growth over the forecast period owing to rising jet fuels and other downstream products demand such as diesel and gasoline. Low crude oil prices in the recent past have revived high-performance gasoline and diesel demand which is further estimated to steer growth in the segment over the next few years. The segment is anticipated to grow at an estimated CAGR of 7.2% from 2015 to 2022.

The Asia Pacific dominated the global industry in 2014 and is expected to witness the fastest growth over the forecast period. Growing oil & gas, petrochemicals, and construction industries in emerging markets such as India, China, Indonesia, and Vietnam are expected to drive regional growth.

Europe accounted for over 20% of the total market volume in 2014 and is anticipated to witness moderate growth over the forecast period. Upcoming capacity expansions in existing petrochemical complexes and biorefineries in countries including Germany, Hungary, Belgium, and Italy are anticipated to drive product demand. 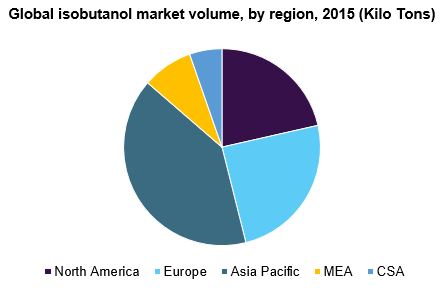 Central & South America and the Middle East & Africa are estimated to witness above-average growth on account of rising product use as a gasoline additive. Central & South America and North America have a large number of ethanol plants that are expected to be converted into isobutanol plants over the next seven years. The product is anticipated to substitute ethanol and capture most of the application segments owing to high energy density as compared to the later.

Major industry leaders have been focusing on reducing their dependence on petroleum-derived feedstock. Shifting trends towards the development of renewable alternatives to reduce environmental impact may be attributed to the above factor. Companies such as Gevo and Butamax have already commercialized bio-based isobutanol and are estimated to increase their production capabilities by collaborating with various biotechnology firms.

Isobutanol is used as a solvent in the production of consumer care products or disinfectants. The recent CoVID19 outbreak has resulted in a considerable increase in the production and consumption of hand sanitizers and surface disinfectants, thereby positively affecting the demand. The updated report will account for COVID-19 as a key market contributor.