The global isosorbide market size was valued at USD 396.4 million in 2018 and is expected to grow at a compound annual growth rate (CAGR) of 8.5% from 2019 to 2025. Isosorbide is commercially available in two grades: polymer and technical. Rising demand from the cosmetics and pharmaceutical industries, a growing bioplastics market, and increasing usage in elastomers and polymers are key factors that are slated to drive the market. 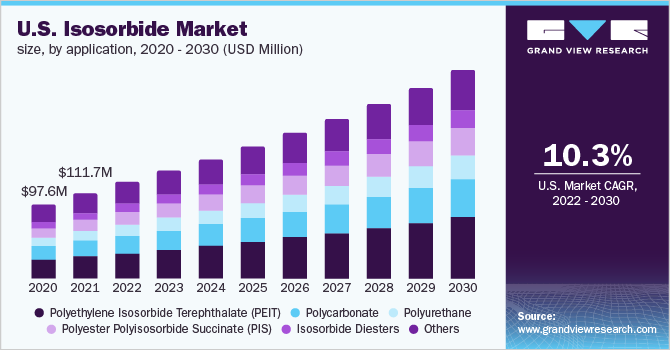 Rising environmental awareness among consumers regarding sustainability and technological advancements in this field is further estimated to have a positive impact on market growth. Moreover, shifting consumer preference toward bioplastics, fueled by rising awareness regarding green product consumption, is estimated to boost market growth over the next few years.

The PEIT segment in the U.S. accounted for the largest market share of over 25.0% in 2018 and is estimated to exhibit a high CAGR during the forecast period. Strict EPA regulations in the U.S. are estimated to increase demand for isosorbide in the nation. Polycarbonate is the second largest segment and is projected to register a CAGR of nearly 10.0% by 2025 owing to enhanced optical properties. However, polyester polyisosorbide succinate (PIS) is estimated to grow at the fastest pace in the future.

However, side-effects of isosorbide derivatives on health such as uneven heart rate, severe headache, and angina pain are estimated to hamper overall market growth over the projected period. Rising focus on bio-based chemicals has been leading to high investments in research and development and product innovation with environment-friendly properties is estimated to create new opportunities for market development in the forecast period.

Moreover, a shift in trend towards replacing petroleum synthetic plastics is estimated to boost regulatory trends of isosorbide in the future. Isosorbide has been identified as an emerging bio-based platform chemical by the U.S. Department of Energy. Raw material supply at feasible cost is a major challenge estimated to boost the market growth in the years to come. Raw materials used for manufacturing isosorbide comprise corn, wheat, sorbitol, and potatoes.

The global isosorbide market is categorized based on application into polyethylene isosorbide terephthalate (PEIT), polycarbonate, polyurethane, polyester polyisosorbide succinate, and isosorbide diesters. The PEIT segment dominated the overall market by accounting for over 25.0% of the total market in 2018 and is estimated to register a CAGR of 9.7% during the projected period owing to enhanced heat resilience, high demand from food & beverage industry, and growth opportunities in pharma industries.

The PEIT segment in the Asia Pacific is estimated to expand at a CAGR of 11.6% over the forecast period owing to strict rules regarding plastic usage and disposal. Also, rising awareness and higher success rate of this application and increasing focus of the chemical industry on a bio-based product is estimated to propel overall industrial demand in the future.

Polycarbonate followed the PEIT application and accounted for more than 16.0% of the total market in 2018. The reason behind overall market growth is a high demand from industries like electrical, electronic, medical devices, and automotive. For instance, Roquette has raised its production scale with successful pilot-scale plants of isosorbide polycarbonate. Polyurethane and PIS are the fastest growing applications and are projected to exhibit a CAGR of 7.9% and 8.8% respectively.

Polyurethane based isosorbide possess properties like low polydispersity and high thermal stability. Whereas, PIS has properties like glass transition temperature and molecular weight suitable for powder coating applications. However, isosorbide diesters is another application that accounted for over 8.5% of the total market in 2018 owing to its excellent plasticizing properties.

Major end-use industries covered comprise resins and polymers, additives, and others like the pharmaceutical and medical industry. Resins and polymers remained the leading end-use segment and accounted for over 60.0% of the total market demand in 2018. The reason behind overall sector growth is the rising interest of polymer industries in bio-based products. For instance, prominent players like Mitsubishi Chemicals and SK Chemicals have been focusing on the production of polymers based on isosorbide. The segment is estimated to register a revenue-based CAGR of 9.0% over the projected period. 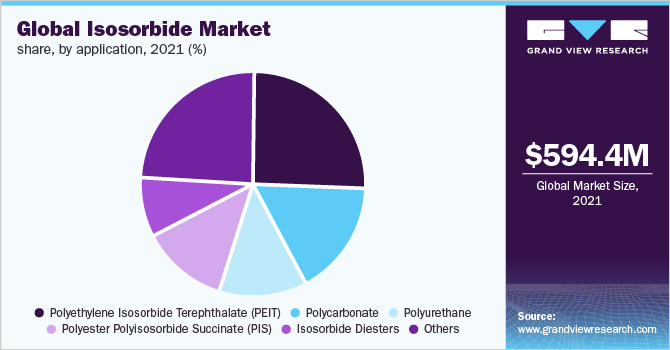 Additives are estimated to grow at the fastest pace, registering a CAGR of 9.2% in terms of revenue over the forecast period. The reason behind overall sector growth is a strict policy regarding the toxic nature of BPA and rising concern regarding the toxic impacts of synthetic chemicals along with the commercialization of bio-based isosorbide.

Other end-use industries such as the medical and pharmaceutical sectors are anticipated to expand at a CAGR of 7.8% in the upcoming period. Isosorbide-derived epoxy resins are projected to gain significant importance in biomedical applications, drug delivery systems, bone cement as well as coatings over the forecast period owing to their enhanced biodegradation abilities.

Globally, Asia Pacific accounted for the largest market share in 2018 and is estimated to exhibit a CAGR of 10.4% over the projected period. The reason behind overall market growth is the rising demand for bio-plastics mainly in China owing to low raw material and labor costs. For instance, major chemical and biotechnology companies such as Roquette have been shifting their manufacturing bases to low-cost countries such as China, India, Thailand, and Indonesia.

The Asia Pacific was followed by Europe, which accounted for 25.59% of the total market volume in 2018 owing to environmental hazards caused by the use of petroleum-derived plastics. The promising regulatory schemes, promoting sustainable chemistry is a major market driver for Europe. Moreover, Germany, France, and the U.K. are major product consumers in this region owing to the high demand for bio-based plastics.

North America emerged as the third-largest consumer. Rising demand for bio-based polymers such as PET, polycarbonate, and polyurethane made from isosorbide is estimated to drive the demand over the forecast period. For instance, U.S. based ADM, one of the leading food processing companies in the world, has been developing isosorbide due to its rapidly growing demand.

The rest of the world including Central and South America and the Middle East and Africa are estimated to grow at a lucrative pace over the forecast period. Brazil is one of the largest producers of corn/maize and is among the top five maize producers in the world. Furthermore, it is gaining the attention of many bio-plastic manufacturing companies, as maize is one of the basic raw materials for producing isosorbide and further bio-plastics.

Prominent players in the market include Roquette Frères, Archer Daniels Midland, Cargill, Novaphene, Mitsubishi Chemical, SK Chemical, and Par Pharmaceutical. These companies are concentrating on the expansion of business across the globe to gain a high market share in the global industry.

These key players are involved in the development of bio-based building blocks which are a substitute for conventional platform chemicals. Various companies such as Tate and Lyle, Novomer, BioAmber, Genomatica, and DuPont have been working on the commercial development of these building blocks.

Roquette is the largest producer of isosorbide which is present across the value chain and is engaged in the production of starch, isosorbide, as well as biopolymers. Companies such as Shangai Trustin Chemical Co. Ltd is a major product distributor. Roquette offers bio-based isosorbide derivatives under the brand Polysorb. Some of the prominent players in the isosorbide market include:

This report forecasts revenue growth at global, regional, and country levels and provides an analysis of the latest industry trends in each of the sub-segments from 2014 to 2025. For this study, Grand View Research has segmented the global isosorbide market report based on application, end-use, and region:

How big is the isosorbide market?

What is the isosorbide market growth?

Which segment accounted for the largest isosorbide market share?

b. Resins & polymers dominated the isosorbide market with a share of 50.1% in 2019. This is attributable to increasing significance in bio-refining industry for development of novel bio-based polymers and resins.

Who are the key players in isosorbide market?

What are the factors driving the isosorbide market?

b. Key factors that are driving the market growth include increasing demand for isosorbide derivatives in medical applications and growth in bioplastic sector.