The global kaolin market size was estimated at USD 4.24 billion in 2021 and is expected to exhibit a compound annual growth rate (CAGR) of 3.7% from 2022 to 2030. The market is showing signs of recovery with progress observed in construction activities around the globe during the second half of 2020.Majority of the countries around the globe designated the construction activities among essential industries, thereby opening material demand for products such as paints & coatings, plastic, ceramics, among others. This directly brought some relief for the kaolin vendors which observed significant decline in the new order bookings during the first half of FY 2020. The U.S. is among the largest producers of kaolin around the world. As per the stats released by the United States Geological Survey (USGS) in 2022, the production volume of the product declined continuously from 2017 to 2020. Especially in 2020, the production volume decreased by nearly 9.7% owing to the widespread disruption caused with the emergence of COVID-19. In addition, with the lockdown initiation, the downstream demand of the product suffered immensely with key application sectors such as paper, ceramics, rubber, among others witnessing negative trajectory. 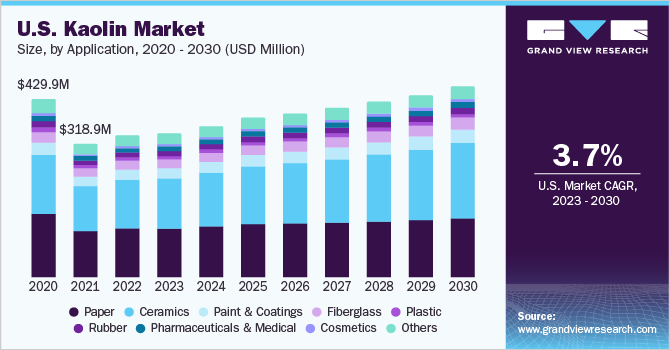 The domestic paper industry was badly affected by the emergence of COVID-19 and the subsequent work from home policy. Owing to the remote working scenario, consumption of printing and writing paper declined significantly in FY 2020. Such downgraded demand led its havoc on the production side as overall volume of writing and printing paper in the U.S. declined by nearly 7% between 2019 and 2020.

On the consumption side, slowdown in the construction activities during Q2 of FY 2020 dried up the demand for materials such as plastic & paints, ceramic and associated products, plastic, among others. This directly impacted the new order bookings of kaolin and related products. Despite such sluggish consumption trends, the domestic marketspace showed the signs of improvements from the last quarter of FY-2020 largely due to the full resumption of industrial and construction activities. In addition, the passing of infrastructure investment and jobs act is likely to open new avenues within the construction sector of the country.

Paper dominated the market and accounted for a volumetric share of nearly 39.1% in 2021. Kaolin coating improves the appearance of paper giving it varied level of gloss, smoothness, brightness, opacity and printability. In addition, the product aid in enhancing the printability of paper by providing added ink absorption, ink pigment holdout, lower tinting tendency and increased roughness. Aforementioned factors contribute to its large market share in the paper industry.

Ceramics is projected to emerge as the second largest application segment with the highest compounded annual growth rate of nearly 4.6% in terms of volume in the forecast period. The use of the product in ceramic manufacturing has been gaining prominence on account of characteristics such as fine particle size, chemical inertness, absorption properties, refractoriness, white burning feature and high fusion temperature. The aforementioned properties make it suitable for manufacture of porcelain and bone china.

Paints & coatings accounted for a market revenue share of nearly 6.2% in 2021. The use of paints & coating in construction industry is projected to remain a key driver for the market growth of kaolin. The use of the product to enhance the performance of paints in  form of better suspension properties, rapid dispersion, corrosion resistance and give superior water resistance and reduced viscosities is anticipated to positively aid the market growth in the near future.

Rubber is projected to account as the fifth largest market with a volumetric share of nearly 2.1% in 2021. The segment is estimated to lose its market share owing to the prevalence of substitutes in the forecast period. The use of calcined products for the production of heavy-duty insulation rubber has gained prominence over the last few years. Thus, directly impacting the penetration of kaolin in this particular application segment.

Asia Pacific accounted for largest volumetric share of more than 41.0% in 2021. Economic development and rapid industrialization have stimulated the growth of kaolin market in Asia Pacific. The region is predicted to exhibit the fastest growth rate during the forecast period. Countries such as China, India, Malaysia, Vietnam, and South Korea are projected to be the major contributors to the growth of regional marketspace. 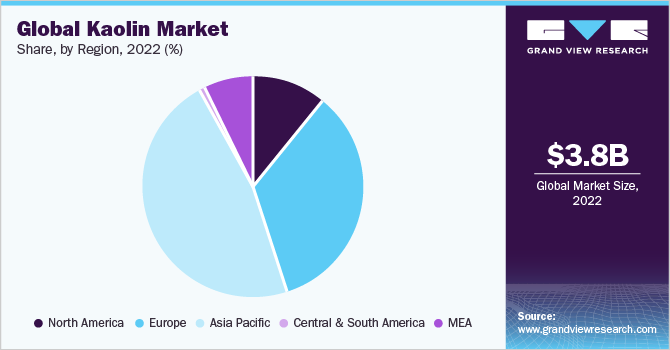 Europe is anticipated to emerge as the second largest regional space in 2021. The regional economic growth was significantly impacted with the emergence of coronavirus in 2020. The key countries of the region including the U.K., Germany, Italy, Spain, and others showcased lower industrial output throughout the FY 2020. The sluggish growth in the industrial output directly influenced the dynamics of the product. The regional growth witnessed signs of improvements in 2021. However, ongoing conflicts in the region including Russia Ukraine war and surging energy prices are likely to restraint the regional growth over the forecast period.

North America region registered a revenue share of nearly 13.4% in 2021. The drive of the current U.S. administration to promote the development of green energy sectors is projected to play a key role in uplifting demand for kaolin associated products. The greater usage or utilization of ceramic and ceramic based fused in regional solar sector is likely to present new opportunities for the vendors of the industry in the North America region.

Middle East & Africa region is poised to attain a compound annual growth rate of nearly 3.5% in terms of volume in the forecast period. The construction industry in the Middle East is expected to expand over the predicted timeline driven by positive developments in regional economic conditions and subsequent improvements in supporting policies and norms. The region completed projects worth USD 130.0 billion during 2019, as compared to the USD 100.0 billion in 2016. Such strong momentum in the regional construction marketspace is likely to aid the development of kaolin industry.

The vendors of this marketspace remained under immense pressure due to the economic disruption caused with the arrival of COVID-19. The new order bookings and shipments were directly impacted due to the imposed lockdowns and transportation restrictions. Even the mine output suffered in majority of the cases due to the partial utilization rate and limited work personnel.

The manufactures are mostly focusing on keeping the liquidity flow in order to avoid any further losses. Limited new order bookings pushed the financial revenue earnings for most of the vendors towards negative trajectory in FY 2020. Even the trade opportunities declined due to the partial closures of ports around the globe. The situation improved in FY 2021 with the price rise announced by majority of the industry participants. Some of the prominent vendors in the kaolin market include:

This report forecasts revenue growth at the global, regional, and country levels and provides an analysis on the latest industry trends and opportunities in each of the sub-segments from 2017 to 2030. For this study, Grand View Research has segmented the global kaolin market report based on application, and region:

Which segment accounted for the largest kaolin market share?

b. Paper segment dominated the kaolin market with a volume share of nearly 36.8% in 2021, owing to its extensive use of the product as a filler in paper manufacturing.

Who are the key players in kaolin market?

What are the factors driving the kaolin market?

b. Rising prominence of kaolin especially in the manufacturing of whiteware ceramics is projected to aid the kaolin market growth over the predicted timeline.

How big is the kaolin market?

What is the kaolin market growth?

The mining industry accounts for a vital share of the global economy and is responsible for supplying key raw materials for several applications and end-use industries, thus being a key sector of focus amidst the ongoing pandemic outbreak. Mining industries in China are expected to return to normal operations by Q3 of 2020 as enterprises indicated towards the returning of their workers soon. Moreover, Iron ore producers are known to be the least impacted. Major players such as BHP and Vale reported experiencing no major influence on their operations due to the COVID-19 virus. The iron ore prices reached above USD 90 per ton amidst the pandemic situation which may negatively impact the end-use industries. The report will account for COVID-19 as a key market contributor.