Acne is the most common skin condition in the U.S. and other developed countries affecting over 50 million Americans every year, according to the American Academy of Dermatology. Treatments for acne include a huge range of ingredients in different forms; however, various clinical trials have reported that lactoferrin helps in treating acne effectively. Lactoferrin gets rid of the main food source for pathogens and helps in neutralizing one of the main contributors of acne, as it offers anti-inflammatory properties. This plays a huge role in pore clogging and formation of acne. 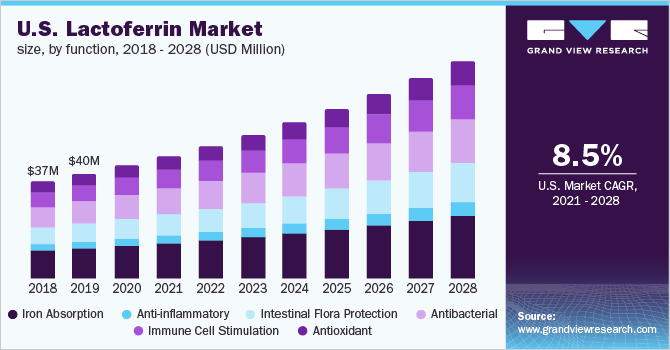 The global personal care market is experiencing a shift from the traditional brick and mortar stores to the specialty and online stores. Women across the globe and all age groups prefer a cross channel approach for purchases. Demand for novel ingredients with minimum side effects and efficiency is anticipated to further propel the growth of lactoferrin over the forecast period.

Lactoferrin is highly used in decreasing dermal immune responses in humans by inhibiting local production of cytokine mediators of inflammation. Various clinical trials have showed that lactoferrin can be effectively used in the prevention and treatment of gastrointestinal inflammatory conditions. Rising consumer concern towards gut health coupled with the increasing demand of lactoferrin to prevent bloating and Irritable bowel syndrome as it reduces the systemic and intestinal inflammation is anticipated to boost the growth of this segment over the forecast period.

Manufacturers are focusing on understanding consumer patterns to serve the changing demands among millennials. Companies have started investing in the packaging and upgradation of ingredients depending on whether the point-of-purchase is a club warehouse, natural specialty stores, or smartphones and computers. Manufacturers are creating an omnichannel strategy to understand which products consumers are spending their money on. Product marketing also differs on the basis of the channels used (online or offline) and the strategies are made accordingly.

Among functions, iron absorption recorded the highest market share in 2018, accounting for over 29% of the overall market revenues. This segment is expected to continue its dominance over the forecast period. Anemia affects roughly 30% of the world’s population, half of the cases are because of iron deficiency.

According to the World Health Organization, global anemia prevalence was 43% in children, 38% in non-pregnant women and 29% in pregnant women. It is a global public health problem that affects child and maternal mortality and physical performance. Lactoferrin helps with anemia, weakness, iron deficiency and low immunity as it increases the hemoglobin level and boosts energy and vitality.

Americans spend more than USD 38 billion a year on foods, beverages, creams and over the counter supplements that will help in improving the gut bacteria and treat various digestive health disorders such as ulcers, diarrhea, and hepatitis C. A wide range of doctors and medical practitioners are using lactoferrin to shorten the cold, boost the immune system and reduce the symptoms of digestive disorders.

Lactoferrin also helps in restricting a wide range of pathogenic bacteria and other microbes as they need a supply of free iron to multiply, and lactoferrin’s ability to bind iron makes it difficult for the microbes to grow. Activated lactoferrin acts as a powerful deterrent to pathogenic bacteria that may be present on a meat surface. The usage of the product for antibacterial functions is projected to grow at a CAGR of nearly 9% during the forecast period.

The infant formula application segment recorded the highest market share in 2018, accounting for nearly 39% of the overall industry revenues. The demand for lactoferrin in infant formula is expected to increase owing to the increase in the number of clinical studies and changing consumer dynamics. In addition, the demand for infant nutrition especially in the developed economies owing to the rising working class women and increasing prevalence of iron deficiency among infants is expected to further propel the demand for the product in infant nutrition over the forecast period. 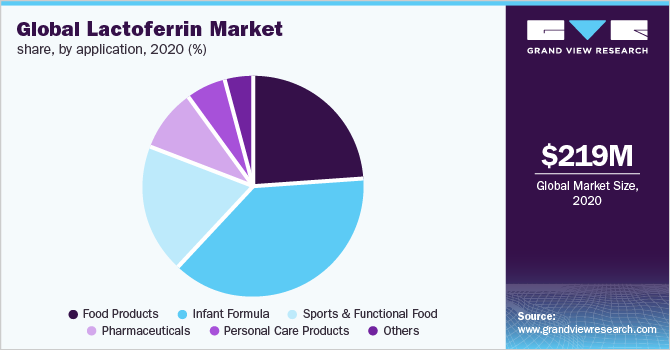 Lactoferrin is highly preferred in animal feed because of its various health benefits. Calves fed with the product has shown a significant reduction of diarrhea, along with the number of Escherichia coli in feces and in vivo of the calves. The product also helped in the optimal absorption and digestion of nutrients, which helped in increasing the quality of the milk produced by calves.

Lactoferrin is one such ingredient, which is used as a supplement to benefit general health and protection against bacteria, along with the reduction of any inflammation. The ingredient is highly used in anti-aging creams as it binds with iron, which reduces the chances of free radicals and helps in preventing cell damage that is a part of ageing process. All these factors are anticipated to surge the demand for lactoferrin in personal care products in the near future.

Asia Pacific emerged as the largest region in the lactoferrin market in 2018. In terms of revenue, this region accounted for a market share of nearly 32% during the same year, and is expected to retain its pole position in the market throughout the forecast period. China, India, and Japan were observed to be the largest markets for the product in Asia Pacific.

Product manufacturers are being benefited by the presence of a large consumer base in these countries. Asia Pacific, unlike most other regions in the world, houses a sizable number of small and medium-sized product manufacturers. In the near term, this region is expected to encourage more manufacturers given the increasing popularity of health supplements within this region.

North America was the second largest market for lactoferrin in 2018. In terms of revenue, this region accounted for nearly 25% of the global revenues in 2018. The U.S. was observed to be the largest market for the product within the region. High incidences of digestive distresses among U.S. individuals have driven the product demand across the country. Furthermore, mushrooming growth of retail outlets in the country has been increasing the manufacturers’ retail success within this country.

North America has a vast population facing rising obesity, and digestive distress, among lifestyle-related diseases on account of their dietary habits, and the availability of several processed & ready-to-eat foods, which are not necessarily good for consumer health. This, in turn, has been creating the demand for lactoferrin in this region over the years.

The market is highly competitive in nature and is driven by product offerings and consumer demand. The market offers various opportunities for new entrants owing to the continuous shift in the consumer preferences and easy raw material availability, which has helped to ignite a sector that used to be limited to fewer products. In this market, factors such as territorial market size, competition intensity, capacity and development of demand, labor availability, and local infrastructure are predicted to influence the distribution of final products.

The companies are directly involved in retailing their products through e-commerce, supermarket, hypermarket and convenience stores. Consumer buying behavior has reshaped over the past years as availability of product, increase in varieties, convenience in shopping, selection of desired quantity & delivery period, and discount offers have instigated consumers to prefer online retail.

This report forecasts revenue growth at a regional & country level and provides an analysis of the industry trends in each of the sub-segments from 2014 to 2025. For the purpose of this study, Grand View Research has segmented the global lactoferrin market report based on function, application, and region: