The global laparoscopic gynecological procedures market size was valued at USD 21.83 billion in 2020 and is expected to grow at a compound annual growth rate (CAGR) of 6.7% from 2021 to 2028. Increasing adoption of minimally invasive surgeries, growing prevalence of gynecological disorders, and surgery-related technological advancements are driving the market growth. In addition, the COVID-19 pandemic has majorly impacted the market as surgeries were often being postponed or even canceled to curb the spread of the virus. Elective surgeries are limited, however, situations necessitating urgent gynecological or obstetric surgeries are continuing to be conducted. 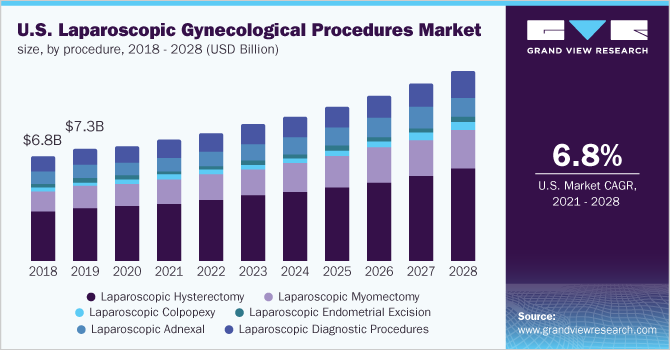 The American Association of Gynecologic Laparoscopists (AAGL), European Society of Gynaecological Endoscopy (ESGE), Royal College of Obstetricians & Gynaecologists (RCOG), and Society of American Gastrointestinal and Endoscopic Surgeons (SAGES) stated that elective surgical procedures for benign diseases must be postponed, prioritizing emergency surgeries. This will enable the utilization of key resources in obligatory areas.

The increasing prevalence of gynecological disorders, such as abnormal vaginal bleeding, Uterine Fibroids (UF), cervical cancer, ovarian cysts, endometriosis, and other related disorders, is driving the market growth. UF is one of the most common gynecological disorders. It is a benign tumor of smooth muscle cells formed in the woman’s uterus, which can lead to pelvic pain, extreme menstrual bleeding, infertility, and frequent urination. For instance, as per the research article published in Dove Press Ltd., prevalence estimations of uterine fibroid disease varied, ranging from 5.4% to 23.6%, depending on age group. Moreover, according to the American Academy of Family Physicians, prevalence can be detected in up to 80% of women by 50 years of age. Such a high target patient pool leads to an increase in demand for laparoscopic procedures.

Uterine cancer is one of the most prevalent gynecological disorders globally and its prevalence is rising at an exponential rate. This upsurge has commonly been driven by the rise in obesity cases. For instance, according to the American Cancer Society, Inc., around, 66,570 new uterine cancer cases are expected to be diagnosed in 2021. Moreover, the Canadian Cancer Society estimated nearly 7,400 women in Canada were projected to be diagnosed with uterine cancer in 2020. Furthermore, as per Cancer Research U.K., uterine cancer is the 4th most common cancer, with about 9,500 cases reported in 2017. Therefore, the increasing incidence of uterine cancer has led to the increasing number of laparoscopic procedures, thereby accelerating market growth.

Nowadays, minimally invasive surgical procedures are being increasingly adopted due to lower trauma associated with them. Small incisions decrease postoperative pain and facilitate speedy recovery, leading to high adoption of these procedures, which is driving R&D in this field. In addition, minimally invasive laparoscopic surgeries are being covered by health insurance providers in selected countries. For instance, Medicare now covers up to 75% of laparoscopic operations, as listed in the Medicare Benefits Schedule (MBS). These factors have led to increased preference for minimally invasive surgeries by patients.

The risk of colorectal cancer increases with age, as it is commonly diagnosed in people aged 65 to 74 years. As per the WHO, the global geriatric population is expected to rise from 7% in 2000 to 16% in 2050. According to the American Society of Nephrology, urologic disorders are the third most common concern amongst the elderly population, and these account for about 47% of the physician visits. Thus, the rising geriatric population is also likely to be a major factor driving the market over the forecast period.

Laparoscopic hysterectomy is one of the widely used minimally invasive procedures for removing the uterus. This procedure has several advantages, such as the low risk of blood loss & infection and reduced hospital stays. Moreover, the risks of getting complications post-surgery are comparatively low. In addition, this procedure is inexpensive compared to a robotic hysterectomy. Thus, the aforementioned advantages drive its adoption, in turn, boosting the segment growth.

The laparoscopic myomectomy segment is anticipated to register the fastest CAGR over the forecast period. It is an inexpensive and safe procedure for removing fibroids from the uterus and advantageous as compared to other treatments. It results in less blood loss, shorter hospitalization, and rapid postoperative recovery. It also offers a decreased risk of postoperative pain and lower incidence of ileus & thrombo-embolic phenomenon. Over the past two decades, laparoscopic myomectomy has gained popularity as an alternative to conventional laparotomy.

However, this procedure is currently challenging in minimally invasive surgery that necessitates a well-trained surgical team, appropriate instrumentation, and careful patient selection. Nevertheless, the increasing inclination of gynecologists toward laparoscopic techniques, and advancements in surgical instrumentation and suturing materials might help keep laparoscopic myomectomy from being restricted to tertiary care. Furthermore, technological advances, such as the increased use of robotic and laparoscopic-assisted surgery to provide quality and effective care, will add to the segment expansion in the forecast period.

The hospitals segment held the largest revenue share of 57% in 2020. Hospitals offer superior care to patients and provide reimbursements for certain procedures, which are further contributing to the segment growth. Furthermore, hospitals are currently advancing in terms of technology. Technologically advanced devices are being used extensively in hospitals to provide better treatment. These devices are not only simplifying treatment procedures but also providing better, faster, and accurate results.

Hospitals also witness a significantly high inflow of patients for laparoscopic procedures as compared to other healthcare settings, owing to ease of handling any emergencies that may arise during surgical procedures and availability of a broad range of treatment options. Thus, the aforementioned factors are expected to drive the growth of the hospitals segment. 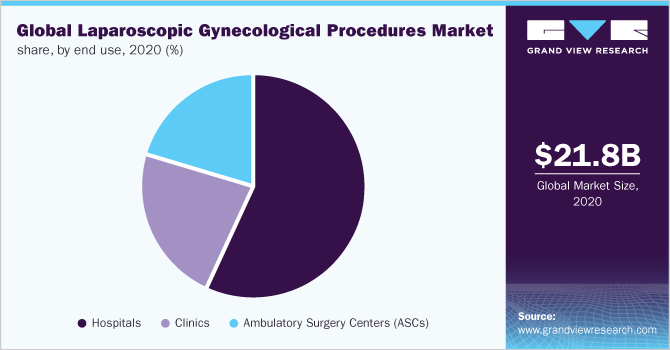 On the basis of end use, the market has been segmented into hospitals, clinics, Ambulatory Surgery Centers (ASCs), and others. The growth of the hospitals segment can mainly be attributed to an increase in the number of patients suffering from various chronic ailments and consequent rise in surgical procedures.

The ASCs segment is expected to grow at the fastest CAGR over the forecast period. High preference for outpatient surgeries, increase in the adoption of minimally invasive surgeries, and cost-effectiveness of ASC-based laparoscopic procedures are key factors responsible for the lucrative growth of this segment. Lower postsurgical complications in minimally invasive laparoscopic surgery are expected to increase the demand for ASCs as they offer several advantages to patients, including shorter procedure time and same-day discharge. Most intra-abdominal procedures can now be performed laparoscopically at ambulatory surgery centers, as these are less invasive. Surgeries at ambulatory surgery centers not only have shorter stay duration but are also more affordable than inpatient operations, which reduces patient expenditure. These factors are projected to boost the segment growth during the forecast period.

North America dominated the global market accounting for the share revenue share of 40.72% in 2020 owing to the presence of well-established healthcare infrastructure, availability of skilled surgeons, and launch of technologically advanced products by the key market players. Growing awareness about the benefits of minimally invasive surgeries and laparoscopic procedures will drive the market growth over the forecast years. In addition, increasing healthcare expenditure in the U.S. may also favor the entry of both new and old players.

For instance, as per the Centers for Medicare and Medicaid Services, the U.S. healthcare spending increased by 4.6% and reached USD 3.8 trillion in 2019, accounting for approximately 17.7% of the GDP. The National Health spending is expected to grow at an annual rate of 5.4% from 2019 to 2028, to reach USD 6.2 trillion by 2028. Furthermore, several government and non-government bodies increased their funding in healthcare sectors to support innovations and technological advancements in surgeries & other fields.

For instance, healthcare finance by local and state governments had increased to 4.1% in 2017 from 3.8% in 2016. These factors indicate that the U.S. market would exhibit considerable growth over the forecast period. The market in Asia Pacific is majorly driven by China, Japan, India, Singapore, and Australia. China dominated the APAC regional market, in terms of revenue share, in 2020. The market in China is driven by a rise in disposable income levels and a fast-growing geriatric population.

According to the China Population and Development Research Center, approximately 350.0 million people in China will be above the age of 65 years by 2050. In addition, as per the WHO, by 2020, China will have 400 million people aged 60 years & above and about 100 million people aged 80 years. Other driving factors include affordable devices, an increase in mergers & acquisitions, and government initiatives to improve healthcare services. The government in the country has made significant investments to provide basic health insurance to all its citizens.

This report forecasts revenue growth at global, regional, and country levels and provides an analysis of the latest industry trends in each of the sub-segments from 2016 to 2028. For the purpose of this study, Grand View Research has segmented the global laparoscopic gynecological procedures market report on the basis of procedure, end use, and region:

How big is the laparoscopic gynecological procedures market?

b. The global laparoscopic gynecological procedures market size was estimated at USD 21.83 billion in 2020 and is expected to reach USD 22.99 billion in 2021.

What is the laparoscopic gynecological procedures market growth?

b. North America dominated the laparoscopic gynecological procedures market with a share of 40.72% in 2020. This is attributable to the presence of the key market players, to increasing reliance on laparoscopic surgeries over open surgeries, and increasing awareness about the benefits of minimally invasive surgeries.

Who are the key players in the laparoscopic gynecological procedures market?

What are the factors driving the laparoscopic gynecological procedures market?

b. Key factors that are driving the laparoscopic gynecological procedures market growth include the Increasing adoption of minimally invasive surgeries over traditional methods, the increasing prevalence of colorectal cancer, and other surgery-related technological advancements.