The global LED modular display market size was estimated at USD 5.49 billion in 2019 and is expected to grow at a compound annual growth rate (CAGR) of 13.2% from 2020 to 2027. The increasing adoption of LED modular displays across several applications such as retail stores, airports/ railways, media, and advertising, sports and entertainment, auditoriums, and control room is anticipated to drive the market growth over the forecast period. Furthermore, an increasing number of outdoor events, such as sports events, music concerts, product launches, brand endorsements, and political assemblies, to display live video, traditional advertising, dynamic content, and social media advertising. This is expected to surge the demand for LED modular displays. Many businesses are using advanced technologies such as augmented reality, artificial intelligence, machine learning, and big data to increase customer engagement. Retail stores use interactive displays that enable customers to try on the dresses virtually. 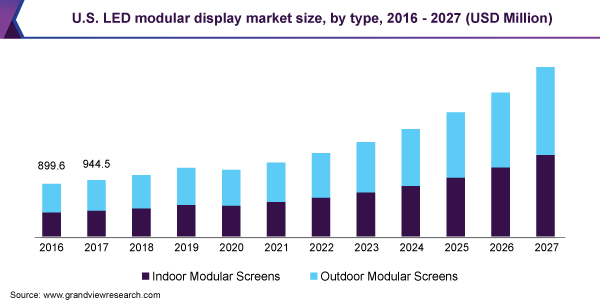 For instance, Nike, along with W+K Lodge, a company specializing in virtual reality, artificial intelligence, and other technologies, introduced Makers’ Experience, which uses object tracking and projection technology to get the designs to appear on the sneakers based on the selection made on a video wall. Thus, the increasing demand for the high interactive digital signage system is anticipated to surge the demand for LED modular displays over the forecast period.

The outbreak of the COVID-19 pandemic is expected to have a noticeable impact on the LED modular display market as the lockdown imposed to arrest the disease's spread has disrupted the supply chains and manufacturing operations worldwide. The demand for LED modular displays has reduced considerably as public places are closed due to the lockdowns, and no marketing activities are being carried out at public venues. Nevertheless, the demand for LED displays is expected to gain traction after the lockdown restrictions are relaxed and public gatherings and outdoor events, such as conferences, sporting meets, and concerts, among others, resume. In August 2020, the first socially distanced music concert after the COVID-19 pandemic was held in the U.K. at Newcastle’s pop-up Virgin Money Unity Arena.

The outdoor modular screens segment accounted for the largest revenue share of over 50% in 2019 and is anticipated to sustain its dominance over the forecast period. Outdoor LED screens are particularly designed to deliver information in a visually appealing style even in harsh environmental conditions, including extreme heat, dust, and rains. The segment holds a dominant share throughout the forecast period owing to its massive demand in sophisticated applications such as perimeter boards, stadium screens scoreboards, advertising boards, and video walls. Additionally, increasing outdoor events such as sports events, music concerts, product launches, brand endorsements, and political assemblies are expected to boost the segmental growth. 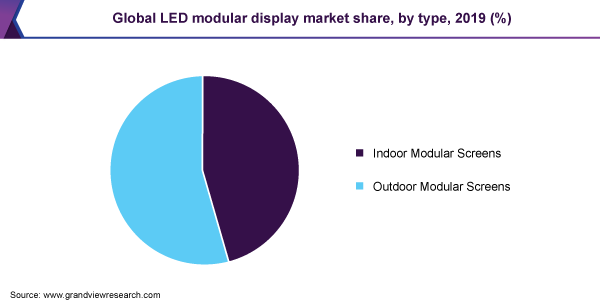 The indoor modular screens segment is projected to expand at the highest CAGR of 13.6% over the forecast period. The increasing demand for LED video walls to display information pertaining to departure and arrival of flights, buses, and trains at airports and stations are expected to drive the segment growth. Moreover, LED video walls are considered as the most efficient and reliable video walls. They are gaining immense popularity, mainly owing to their ability to deliver high-quality and seamless images. Hence, video walls are being increasingly installed in the retail space and shopping malls.

The European market accounted for the largest revenue share of around 35% in 2019. The region holds a dominant share owing to the significant demand stemming from the digital-out-of-home (DOOH) advertising projects and the growing adoption of the technologies in the U.K., Germany, Italy, and Belgium among other countries. Moreover, the increasing number of corporate exhibitions, sporting events, and live concerts are also expected to surge the demand for LED modular displays in Europe.

The Asia Pacific regional market is projected to expand at the highest CAGR of 14.8% from 2020 to 2027. The continuous developments of public venues and the subsequent adoption of modern display technologies for advertising purposes are the factors expected to witness regional growth. Besides, Asia Pacific is home to several major manufacturers, such as SHENZHEN ABSEN OPTOELECTRONIC CO., LTD, Planar, NED Display Solutions, Liantronics, Samsung, and Sony Corporation. Moreover, Japan’s LED video display shipments are expected to increase in 2021 as it prepares for the Olympic Games.

The market is highly competitive and is characterized by large and small players operating in the market. The large players, such as Shenzhen Absen Optoelectronic Co., Ltd., NEC Display Solutions, and Planar (Leyard), are continuously pursuing various initiatives to develop and manufacture large LED modular displays for indoor and outdoor applications. On the other hand, innovators and technology leaders, such as Samsung and Sony Corporation, have been leveraging their capabilities to undertake extensive R&D and expand their reach by introducing innovative large-format LED video walls and displays on the latest technology.

New product launches and up-gradation of the existing platforms have remained the key strategy of these players. For instance, In July 2020, Shenzhen Absen Optoelectronic Co., Ltd. upgraded the C15-31 Plus mesh LED display product. The improvements were made in the visual performance and structure design of the product. The upgrades allowed the product to be used for outdoor advertising applications, such as large-scale building facades and digital billboards. The companies are also engaging in mergers and partnerships, aiming to strengthen their position in the market. In May 2018, Prismaflex acquired 50% of Anthem Displays, LLC, a U.S.-based LED display provider. With the acquisition of Anthem Displays, LLC, the former company aimed to strengthen its position in the U.S. LED display market. Some of the prominent players in the LED modular display market include:

This report forecasts revenue growth at global, regional, and country levels and provides an analysis of the latest industry trends in each of the sub-segments from 2016 to 2027. For this study, Grand View Research has segmented the global LED modular display market report by type and region:

How big is the LED modular display market?

What is the LED modular display market growth?

Who are the key players in the LED modular display market?

What are the factors driving the LED modular display market?

b. Key factors that are driving the LED modular display market growth include an increased number of outdoor events across developed and emerging economies and increasing demand for interactive digital signage systems.