The global low-fat cheese market size was valued at USD 93.9 billion in 2018 and is expected to expand at a CAGR of 3.8% from 2019 to 2025. Low-fat cheese contains a reduced amount of saturated fat. The regular cheese contains 30-40% saturated fat.  The low-fat variant of cheese is processed from skimmed milk, which reduces the fat content by nearly to 7-15%. With a reduced level of fat, the volume of low-density lipoprotein (LDL) cholesterol also gets reduced. Such type of cholesterol is known to be responsible for increased cardiovascular risk. Hence, low-fat cheese is considered to be a healthy substitute for conventional ones available in different forms.

Growing health consciousness among consumers has resulted in a significant shift in their food choices and eating habits. Rising concerns over childhood obesity and shifting food preferences among the urban population have augmented the popularity and demand for the product. For instance, in 2018, Alouette Cheese launched two variants of low-fat cheese dip namely Le Bon Dip and Le Petite Fromage for its American consumers at a minimal price range between USD 4-5. 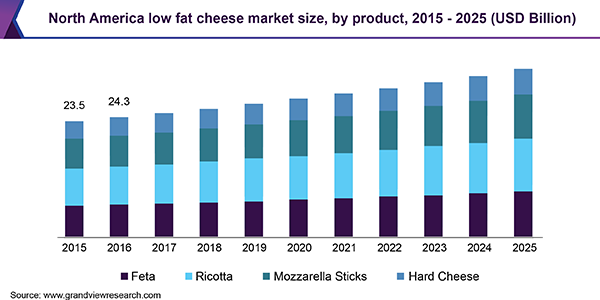 Ricotta is a leading product category in the market. It is a variant that is mainly produced from cow’s milk. The texture of ricotta varies between soft and dry. Salted varieties including smoked cheese are profusely used in the kitchen, whereas the unsalted types such as baked ricotta are consumed directly as appetizers or desserts. Mozzarella is the fastest growing product category owing to an increase in demand from the growing fast food industry worldwide. For instance, in 2017, Domino’s launched its first-ever low-fat variant of mozzarella in Australia, where the fat content was reduced by 25% after four years of extensive R&D in the same.

The store-based channel drives the maximum sales of this market. This category comprises hypermarkets and supermarkets, convenience stores, grocery retailers, mixed retailers, food specialists, and independent small grocers. Hence, the store-based channel dominates the market by providing customers with a one-stop experience. However, the adoption of technology by consumers is increasing due to the rising sale of low-fat cheese through online distribution channels such as Grofers and Big Basket.

Europe held the largest market share, followed by North America. APAC is expected to witness significant growth over the forecast period owing to the high consumption of fast food in the region, along with increasing per capita disposable income in countries such as India and China. This significant growth in the product demand will drive the demand for the global market in the next few years. Additionally, an increasing number of health-conscious consumers preferring low-fat substitutes of regular commodities in the region is a key factor supporting the market growth.

Ricotta held the maximum share of 34.3% in 2018. Ricotta is a variant that is mainly produced from cow’s milk. The texture of ricotta varies between soft and dry. Salted varieties including smoked cheese are profusely used in the kitchen, whereas the unsalted types such as baked ricotta are consumed directly as appetizers or desserts.

Mozzarella sticks are the fastest growing product category, expanding at a CAGR of 4.0% over the forecast period owing to rapidly growing fast-food business worldwide. Mozzarella also makes a good low fat snacking cheese. These sticks are usually labeled with ‘part-skim’ tag and contain a minimal amount of 6 grams of fat, along with 7 grams of protein, 86 calories, and over 200 milligrams of calcium. Shredded mozzarella manufactured from part-skimmed milk is a popular choice amongst consumers as it easily melts over homemade pizza or grilled cheese sandwich.

Hard cheese includes variants such as Parmesan and Gouda. These cheese products are processed by separating and draining the majority of the whey before pressing the curd, which is either waxed or brined later to produce a hard rind. Eventually, the cheese is aged for 2-36 months, and at times even longer. This category is usually more flavorful, less creamy, and grainier in texture. For instance, in 2015, Sargento introduced shredded and low-fat cheddar cheese to increase convenience and flavor for its consumers.

The store-based channel held the largest share of more than 60.0% in 2018. The channel includes hypermarkets and supermarkets, convenience stores, grocery retailers, mixed retailers, food specialists, and independent small grocers. Nowadays, most of the consumers prefer ample options under one roof and hence, such store-based distribution channels offer the same with many discounts offers to drive the sales. For instance, Big Bazaar and Star Bazaar have various discount offers every month on all grocery items including dairy products. This has led to an increased demand for low-fat cheese, especially cottage cheese and mozzarella. 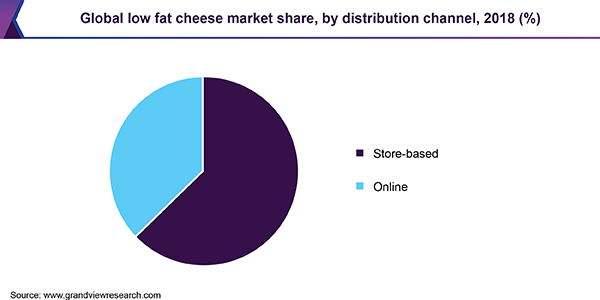 Online sources such as food delivery and grocery apps are another prominent channel fueling the sales of low-fat cheese globally. Food delivery apps such as Swiggy and Zomato have restaurants that offer healthy and low-fat fast food using products such as mozzarella, processed cheese, and cheddar. Additionally, demand for low-fat cheese market is driving the manufacturers to offer their products through online grocery retailers such as Big Basket and Grofers to tap the large customer base.

The market in Europe is expected to generate a revenue of USD 41.5 billion by the end of 2025. Demand for low-fat cheese is anticipated to boost in this region over the coming years due to the significant growth of the fast-food industry and increasing awareness among consumers. Asia Pacific is expected to be the fastest-growing market, expanding at a CAGR of 4.4% over the forecast period. Factors such as a rise in demand for reduced-fat cheese, high disposable income of consumers, and raising awareness about health are expected to drive the market in this region.

CSA countries such as Argentina and Brazil are among the leading consumers of low-fat cheese due to growing health consciousness amongst consumers and increasing demand for healthier food options in this region. All the above-mentioned factors are fueling the demand for low-fat cheese products. For instance, Cheesedotcom launched Provoleta, a low-fat hard cheese variant, which is an Argentinean variant of Provolone cheese. It is usually served as an appetizer or often barbecued to obtain a smoky flavor in the cuisine.

The global market is moderately fragmented due to the presence of major players such as DSM; Crystal Farms; Lactalis Group;  Arla Foods;  Kraft Foods Group, Inc.; Amul; Bongrain; and Britannia Industries. With the presence of large and small vendors competing in terms of quality and price, the market is majorly dependent on consumer preference with a few major players across regions. Companies such as Amul and Britannia are popular amongst consumers in manufacturing low-fat cheese of different types and flavors mostly across the Indian sub-continent and have their supply chain across major cities in the world.

This report forecasts revenue growth at the global, regional, and country levels and provides an analysis of the latest industry trends in each of the sub-segments from 2015 to 2025. For this study, Grand View Research has segmented the global low-fat cheese market report based on the product, distribution channel, and region: