The global luxury vegan men’s fashion market size was valued at USD 17.5 billion in 2020 and is expected to expand at a compound annual growth rate (CAGR) of 10.9% from 2021 to 2028. The increasing popularity of vegan clothing and accessories made from cruelty-free sources, coupled with rising consumer focus on animal wellbeing and safety, has been contributing to the greater social acceptance of these products, thereby driving their demand. Increasing disposable income and consumer spending on luxury products are some of the other prominent factors augmenting the demand for luxury vegan men’s fashion globally. 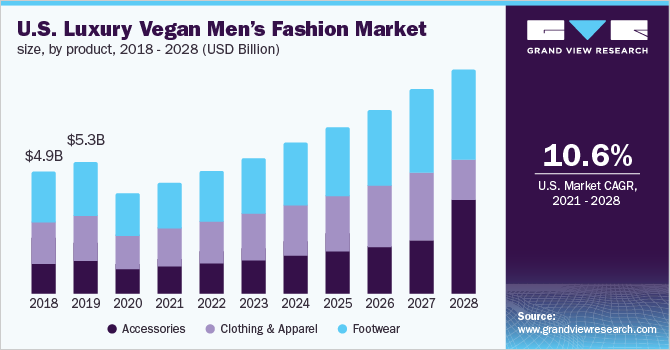 The COVID-19 (coronavirus) outbreak that began in China in December 2019, has had a significant impact on the apparel industry globally, including the market for luxury vegan men’s fashion. Many manufactures in the market have been historically relying on China for both, finished products as well as raw materials used in the manufacturing of the various types of products. According to the ODM Group, a promotional products agency, there are more than 2000 factories in China that specialize in the production of vegan leather fashion products.

Additionally, many countries across the globe have taken preventive measures to restrict gatherings by complete closures of hotels, restaurants, public events, tourism, offices, and all types of social events. The sales of luxury vegan fashion products have been historically driven by the involvement of people in outdoor gatherings and social events, where fashionable and luxury clothes are worn to make a statement.

Brick-and-mortar retail stores and independent apparel and footwear stores are among the prominent sales channels as veganism has been slowly moving into mainstream men’s fashion. Mono-brand or independent luxury vegan apparel retailers have also been trying to attract cruelty-free conscious shoppers. According to The Vegan Society, it was estimated that there were over 600,000 vegans in the U.K. in 2018 and the number has been steadily doubling every year since 2014.

The market for luxury vegan men’s fashion has been witnessing an increase in the number of independent stores and brands with both online and offline stores to increase their reach to consumers. These stores mainly have a large number of independent designers working on different ethic-based clothing to gain consumer traction. For instance, Bead and Reel offer over 60 independent designers providing various ethic-focused apparel such as eco-friendly, cruelty-free, and sweatshop-free styles for conscious consumers.

An increasing number of companies have been focusing on strategic partnerships to expand their presence and reinforce their position in the market for luxury vegan men’s fashion. In the near term, reputed companies are likely to collaborate with small and medium-sized companies in a bid to facilitate sustainable product offerings. For instance, in November 2018, BARO partnered with PrimaLoft to offer products in regions with colder climatic conditions. PrimaLoft was introduced in the U.S. for the military, but the apparel can also be used for high-performance insulation. BARO uses 80% recycled hi-loft PrimaLoft for its Coldwell and Station styles.

Despite an optimistic outlook, several consumers are becoming increasingly aware that vegan materials and cruelty-free materials that are advertised as being ethical, ecofriendly, and sustainable, may have a harmful impact on the environment. A large number of brands that offer luxury vegan men’s apparel, including Komodo, Braintree Clothing, Plantfaced Clothing, and Desideratum, have largely been using rayon and polyester as a cruelty-free alternative to silk, which is highly unsafe for the environment and humans.

The footwear segment dominated the market for luxury vegan men’s fashion and accounted for the largest value share of over 40.8% in 2020. This product segment is projected to witness a CAGR of over 10.7% over the forecast period. An increasing number of startups venturing into vegan footwear is driving the demand. Additionally, many conventional footwear brands including Adidas, Nike, and Rebook are also offering vegan footwear owing to increasing demand from conscious consumers. For instance, Vessi Footwear Ltd, a U.S.-based startup founded in 2017, offers shoes with recycled rubbers and synthetic microfibers. Likewise, Rothy’s, a startup founded in 2016, offers shoes with yarn produced from recycled plastic bottles for both, formal and casual occasions.

The accessories segment is projected to witness the fastest CAGR of 11.8% from 2021 to 2028. The increasing number of options available for men for bags and wallets in terms of style and fabric is likely to lead to a growing demand for the accessories segment over the forecast period. The strong presence of key companies in North America and Europe, where the product awareness is higher, will further boost the market growth.

E-commerce is projected to witness a CAGR of 11.7% over the forecast period. Globally, the online channel has become highly popular among millennials, primarily owing to the convenience it offers. The rapid expansion of e-commerce and growing digitalization, especially among millennials and the younger generation, globally, are driving the online sales of luxury vegan men’s fashion. Additionally, the easy payment options and busy lifestyles of consumers are expected to increase the revenue from the online distribution channel over the forecast period.

The specialty store segment dominated the market for luxury vegan men’s fashion and accounted for the largest revenue share of 23.8% in 2020. Specialty stores specialize in the distribution of certain products-in this case, luxury vegan men’s fashion. Unlike mass merchandisers, specialty stores are relatively smaller format stores that focus on niche products. As these stores target a specific group/type of shoppers, they are strategically located in cities across the country. 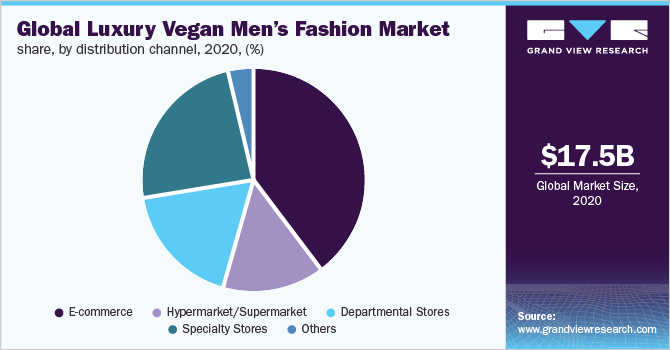 Prospective brands opt for the distribution of luxury vegan men’s fashion products through specialty stores. These stores act as “pop-ups” and help create excitement around a brand or a product. An increase in the number of new market entrants is expected to intensify market competition and boost the demand for luxury vegan men’s fashion products in specialty stores.

North America dominated the luxury vegan men’s fashion market and accounted for the largest revenue share of around 33.1% in 2020. The growing apparel and textile market in the region is expected to drive the market for luxury vegan men’s fashion. According to the National Council of Textile Organization, the U.S. textile and apparel market was valued at USD 70 billion when measured by the value of industry shipments in 2018. In addition, the U.S. is one of the key countries with a high expenditure for the research and development of textile distribution channels such as conductive fabric as well as sustainable and vegan clothing.

Asia Pacific is projected to witness the fastest CAGR of 12.6% over the forecast period. An increasing number of compassionate shoppers who are willing to buy high-quality, cruelty-free, and environment-friendly fashionable products has been instrumental in driving the product demand. Vegan fashion is steadily attracting consumers as many renowned fashion designers have been promoting the concept of sustainable, eco-friendly, and vegan fashion in the region.

The young and working-class populations in the region that exhibit increased interest in their appearance and have been dressing in tune with the latest trends are attracted to vegan fashion as purchasing these products gives them a sense of giving back to the environment. These are some of the factors likely to affect the buying decisions of men in the region.

Prominent market players are likely to focus on establishing their businesses and invest in research and development activities to remain competitive over the forecast period. The vegan fashion market is both growing and transitioning toward the concept of sustainability as it offers an opportunity for brands to capture sales from increasingly environmentally conscious consumers. Established companies have been altering their production methods pertaining to vegan and eco-friendly materials to align themselves with changing trends.

For instance, in July 2018, ECOALF launched Shao Sneakers made from algae and ocean plastic. Five plastic bottles sourced from the ocean are used to create the upper sole and algae is collected from lakes and rivers to create the outer sole. Companies in the market are focusing on introducing innovative services to address the evolving needs of customers and gain a competitive edge over other providers. Some of the prominent players in the luxury vegan men’s fashion market include:

This report forecasts revenue growth at global, regional, and country levels and provides an analysis of the latest industry trends in each of the sub-segments from 2016 to 2028. For the purpose of this study, Grand View Research has segmented the global luxury vegan men’s fashion market on the basis of product, distribution channel, and region:

How big is the luxury vegan menâ€™s fashion market?

What is the luxury vegan menâ€™s fashion market growth?

b. North America region dominates the global luxury vegan menâ€™s fashion market by accounting around 33.1% market value share in 2020. This is attributable to increasing apparel and textile demand coupled with growing acceptance of veganism in the country.

Who are the key players in luxury vegan menâ€™s fashion market?

What are the factors driving the luxury vegan menâ€™s fashion market?

b. The increasing popularity of vegan clothing and accessories made from cruelty-free sources, coupled with rising consumer focus on animal wellbeing and safety, has been contributing to the greater social acceptance of these products, thereby driving the luxury vegan menâ€™s fashion market growth.