The global makeup base market size was valued at USD 12.2 billion in 2018. Rising participation of women in the workforce and increasing physical appearance consciousness among millennial consumers across the world are some of the key factors driving the market for makeup base. Expansion of digital campaigns through YouTube, Instagram, Pinterest, Facebook, Twitter, and beauty blogs has been influencing the consumers to try new beauty products including makeup base. For instance, the Google search for “foundation for me” has doubled from 2013 to 2018.

The increasing millennial population, along with a surge in their spending on cosmetics, is fueling the demand for makeup base over the world. As a result, manufacturers of this industry are targeting millennial consumer groups by expanding the product lines and enhancing online retail platforms. Over the past few years, natural ingredients have been gaining remarkable traction among this consumer group. Rising awareness about the harmful impacts of chemical-based makeup is encouraging consumers to opt for natural cosmetics. As a result, the use of natural raw materials such as plant oils, botanical ingredients, and mineral pigments has increased significantly in this industry. 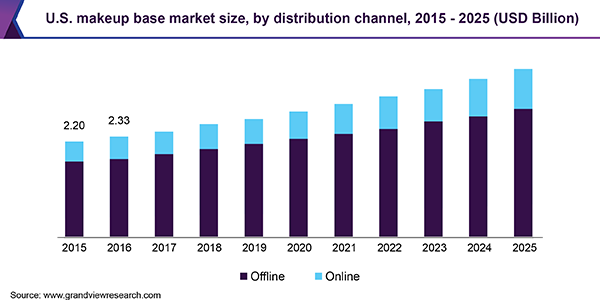 Also, companies have been adopting multichannel distribution that includes both physical and online stores to boost their sales and customer relationship. Social medial platforms play an important role in marketing. As a result, digital marketing has been expanding significantly in this industry. Producers are teaming up with the social influencers for their marketing. The surge in the online beauty tutorials in several social media platforms including Instagram, YouTube, and Facebook has been inspiring the consumers to experiment with new cosmetic products such as makeup base.

Increasing use of makeup among male consumers is expected to widen the scope for the industry in the near future. Companies such as TOM FORD have been targeting male consumers by introducing specialized products for men’s skin and giving these products manlier names. For instance, the foundation for men often called tinted moisturizer. Furthermore, inadequate supply of makeup products such as makeup base for dark skin tones will enhance the opportunity of the makeup base manufacturers in the upcoming years.

The offline distribution channel led the makeup base market and held over 75.0% share of the total revenue. Prominent retail outlets of this distribution channel include supermarkets and hypermarkets and specialty stores. A large number of consumers prefer to buy new cosmetic products such as makeup base from brick and mortar stores as these stores enable consumers to try the product before purchasing. It is an important factor for the consumers as these shades of products vary with each consumer’s skin complexion.

Online distribution channel is projected to expand at the fastest CAGR of 6.3% from 2019 to 2025. The bestselling products are often purchased through online stores. E-commerce allows consumers to shop anywhere, anytime, and has a wide range of products. Therefore, online stores have been attracting consumers over the world. Major e-retailers of this industry include Sephora; Amazon; Strawberrynet; FEELUNIQUE INTERNATIONAL LIMITED; and Ulta Beauty, Inc.

As of 2018, the foundation held the largest share of more than 40.0%. Foundation is available in different forms including liquid, cream, cake, and stick, which provides the skin an even color. It also functions as a moisturizer and sunscreen of skin. Sometimes foundation changes the natural skin tone of the consumer. A wide range of shades has been attracting consumers with different complexions. The trend of cushion foundation has been growing significantly across the globe due to its ease of application. This trend is more prominent in Asia Pacific, especially in South Korea. A large part of the consumers in South Korea has been using this makeup base product. 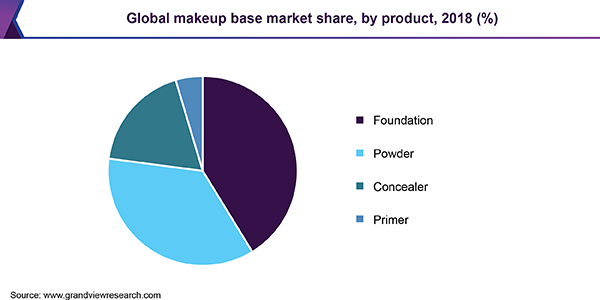 Concealer is expected to witness the fastest growth in the upcoming years as it hides dark areas as well as small marks and highlights the features of the face. Concealers help to cover age spots, dark circles, and other flaws of the skin. Over the past few years, this makeup base product has been gaining significant popularity in the male grooming industry. Manufacturers of this industry have been expanding their product line of concealer considering the trend. For instance, in September 2018, MAC Cosmetics, a brand of Estée Lauder Companies, launched its new range of Studio Fix concealers. These concealers are available in 34 shades and claim to last for 24 hours.

Middle East and Africa are expected to expand at the steady growth in the near future. Increasing spending on makeup products, along with the high income of the consumers in Middle Eastern countries, is boosting the industry growth in this region. Saudi Arabia and UAE are the prominent markets for luxury cosmetics such as makeup base products in this region.

Major manufacturers of this industry include L'Oréal S.A.; Shiseido Company; LVMH Moët Hennessy – Louis Vuitton SE; Coty Inc.; Estée Lauder Companies; Avon Products, Inc.; Amorepacific Corporation; Unilever; Mary Kay Inc.; and Chanel S.A. Mergers and acquisitions have been a key business expansion strategy of this industry. For example, Estée Lauder Companies acquired two growing makeup brands, BECCA Cosmetics and Too Faced, in October 2016 and November 2016. This acquisition is expected to expand the portfolio of prestige beauty brands of Estée Lauder Companies and strengthen its base of young consumers. In addition, the well-established online presence of BECCA Cosmetics and Too Faced will help in boosting online sales of the company.

This report forecasts revenue growth at the global, regional, and country levels, and provides an analysis on the latest industry trends in each of the sub-segments from 2015 to 2025. For the purpose of this study, Grand View Research has segmented the global makeup base market report based on product, distribution channel, and region:

The Beauty and Personal Care (BPC) industry has witnessed a decline in the wake of the Covid 19 pandemic, but the impact is not as severe as seen in other industries. Although discretionary spending has reduced, the BPC market has witnessed a consumer behavioral shift towards safe and reliable products. Products that have a lower risk of contamination owing to automation and longer shelf lives helping the rationing of consumer supplies are expected to stand out in the near future. Brands are also focusing on improving their supply lines in terms of strengthening their E-commerce channel along with offering at-home wellness products, which are highly suited in this volatile business environment. Our team is diligently working towards accounting these factors in our report with the aim of providing you with the up-to-date, actionable market information and projections.