Meat, poultry, & seafood market was valued at USD 4.2 trillion in 2016. Growing population results in increased consumer goods demand which is anticipated to ultimately contribute to enhancing the supply of meat, poultry & seafood products. The growing consumer awareness and preferences for high-quality attributes of meat are expected to steer the global meat industry. 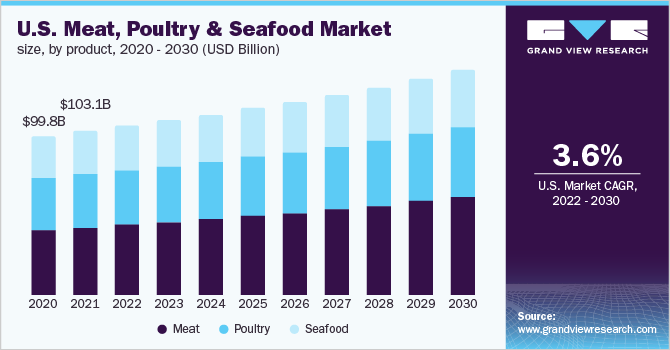 Within the last five years, the global population has increased rapidly, cited mostly in the Middle East and Africa. Frequent chicken consumers tend to be younger and more ethnically diverse, live in larger households, and have lower incomes compared to the average consumers, according to the NCC survey. Generation Xers and baby boomers cook chicken at home more often than millennials do, but the younger generation is twice as likely to eat pre-cooked chicken at grocery store cafés. According to the U.N. Food & Agricultural Organization, the global population is projected to increase to 9.8 billion by 2050.

As per the report, half of the population growth is estimated to be mostly concentrated in India, Congo, Pakistan, Nigeria, the U.S., Ethiopia, Indonesia, and Uganda. GDP growth rate for emerging economies between 2012 and 2016 saw steady growth. Owing to the sluggish economy from 2014 to 2015, several nations were inversely affected in terms of industrial development and trade activities. However, the global economy witnessed a recovering rate of growth in 2016. Development in GDP and disposable income has created a substantial growth potential for premium quality meat and poultry-based foods.

The changing lifestyles that encourage on-the-go eating and a growing trend to replace meals with smaller nutritional snacks have led to an increase in the adoption of ready-to-eat and processed meat products in their daily diet. Growing consumer knowledge about protein ingredients and branding efforts undertaken by major manufacturers across the globe is expected to shift consumer perception, that meat, poultry, and seafood are healthier sources of proteins as compared to a vegetarian diet.

Seafood is expected to emerge as the fastest-growing product segment accounting for 39.4% of market share in 2025 in terms of volume owing to become one of the preferred choices in food consumption owing to its nutritious values, easy availability, and increased awareness in public. Increasing awareness among various age groups of the population across the globe especially in the Asia Pacific is expected to steer premium and high-value fish demand over the next eight years. 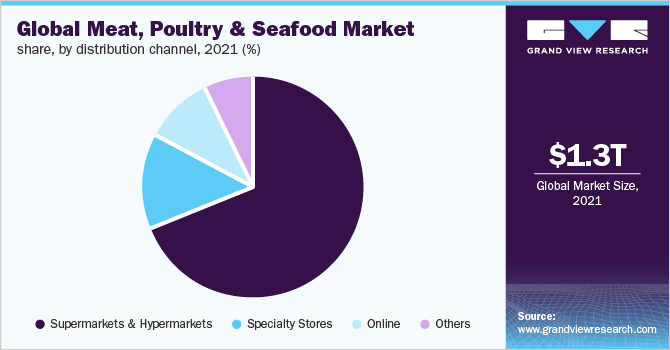 There is the increased popularity of salmon owing to its omega-3 fatty acids which offer health benefits and high protein-low fat seafood for diet-conscious customers. In addition, there is an increased demand for farm-raised seafood is attributed to the shifting preference towards sustainable farming and the environmental benefits associated with it.

Asia Pacific accounted for a share of 75.2% in terms of the total volume in 2016 and is expected to witness the fastest growth with a significant CAGR over the forecast period. This region is primarily characterized by the rising per capita income and the increasing demand for salmon and other seafood products in addition to meat, poultry & seafood.

Countries such as India, China, Indonesia, the Philippines, and Thailand have witnessed rapid growth in terms of industrial and trade activities. The rise in living standards along with the increasing population has steered the market demand for meat in the region. Consumers are shifting their diet preferences towards natural meat, poultry & seafood products, due to increasing awareness of health and lifestyle.

U.K., Russia, France, Germany, and Spain dominated the European meat, poultry & seafood market. Demand in the region is expected to rise owing to the new products introduced and increasing awareness of healthy products. Shifting consumer diet preferences in countries such as Luxembourg, Netherlands, and Belgium is expected to steer demand for meat and meat products.

Major consumers of meat in Germany belonged to the millennial groups. The growing consumer segment of millennials and the rise in awareness for protein-enriched food among its citizens is anticipated to drive the meat demand in the country over the next eight years. The growing awareness of new and innovative product recipes coupled with increasing flavored products is anticipated to steer the demand for meat, poultry & seafood.

The meat, poultry & seafood companies have adopted the strategy of merger and acquisition to expand their business in the domestic as well as global market. In November 2017, Hormel Foods announced the acquisition of Columbus Manufacturing, Inc. from Arbor Investments, for USD 850 million. The acquisition was aimed at enhancing its deli meat and finished products.

This report forecasts volume and revenue growth at global, regional & country levels and provides an analysis of the industry trends in each of the sub-segments from 2014 to 2025. For the purpose of this study, Grand View Research has segmented the global meat, poultry & seafood market report on the basis of product and region: