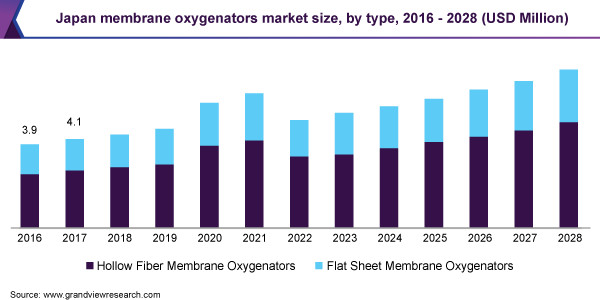 Membrane oxygenators are useful in providing required oxygen to a patient’s tissues. Some of the heart disorders in which membrane oxygenators are used are acute myocardial infarction, decompensated cardiomyopathy, myocarditis, sepsis, and hypothermia. The growing prevalence of cardiopulmonary disorders is anticipated to drive the demand for membrane oxygenators over the analysis period. According to WHO, about 17.5 million people succumb to cardiovascular diseases globally, which is estimated to be 31% of all deaths. The prime causes of cardiopulmonary diseases include unhealthy diet, physical inactivity, tobacco consumption, and smoking. The increasing number of cardiovascular diseases is expected to drive the demand for membrane oxygenators in pediatric, adult, and geriatric patients.

Membrane oxygenators are also used in procedures related to pulmonary conditions, such as acute respiratory distress syndrome, COVID-19, pulmonary embolism, and influenza. Respiratory diseases include conditions such as bronchiectasis, hypersensitivity pneumonitis, lung fibrosis, asthma, Chronic Obstructive Pulmonary Disease (COPD), and lung cancer. COPD has been considered the third leading cause of death in the U.S. after cancer and cardiac diseases. According to the America Lung Association, annually, more than 11 million people are diagnosed with COPD in the U.S. Thus, a rising number of respiratory disorders cases is estimated to drive the adoption of membrane oxygenators, impelling the market growth.

Membrane oxygenators are used for long-term support in the treatment of acute respiratory failure. Bubble oxygenators are being replaced by membrane types for Cardiopulmonary Bypass (CPB), owing to improvement in mass transfer efficiency and membrane technology, driving the market growth. The novel technologies are expanding potential applications of these devices in several ways, including a new patient population base and the ability to make membrane oxygenator mobile for inter-as well as intra-hospital transport.

Various initiatives are being undertaken by the government and other organizations to create awareness about membrane oxygenators. For instance, in 1989, the Extracorporeal Life Support Organization (ELSO) was established in Europe, which aimed at creating awareness about ECMO systems as well as registering the ECMO systems used in ELSO and other ECMO centers in Europe. In addition, Global Initiative for Chronic Obstructive Lung Disease (GOLD) was launched to create awareness about COPD, along with its treatment that includes the usage of membrane oxygenators and ECMO devices. Also, the ECMO program, started by the Iowa University Clinics and Hospitals with collaborative efforts of various departments, such as respiratory care, nursing, and cardiothoracic and pediatric departments, focuses on providing ECMO services to pediatric, adult, and neonatal patients in the U.S.; thus, creating awareness about the application of membrane oxygenators in the treatment of cardiac and respiratory diseases.

The adult segment dominated the market and accounted for the largest revenue share of 56.2% in 2020. In the case of adult cardiac failure, the main indication that specifies the need for membrane oxygenation is cardiogenic shock. Advancement in membrane oxygenator technology has increased its application in the treatment of adults. Technological advancements include advanced designs, pump-less veno-arterial extracorporeal gas support devices, double-lumen cannula, and respiratory dialysis, which further drive segment growth. There are various factors to be considered before including ECMO in the adult treatment plan, such as the degree of organ failure, weight, comorbid conditions, and age, increasing its preference among patients.

The neonate segment is anticipated to exhibit considerable CAGR over the forecast period. A membrane oxygenator is commonly used to manage neonates with respiratory and cardiac failure. According to the Extracorporeal Life Support Organization (ELSO) registry report 2017, ECMO patients include 44.8% of neonates, with around 40,000 neonates treated with ECMO globally. Hence, the increasing number of neonates is expected to augment the demand for membrane oxygenators. However, the total number of neonates treated with membrane oxygenators is dropping significantly over time in large measure due to the recent development of minimally invasive modes of therapy for neonatal respiratory failure, limiting segment growth. 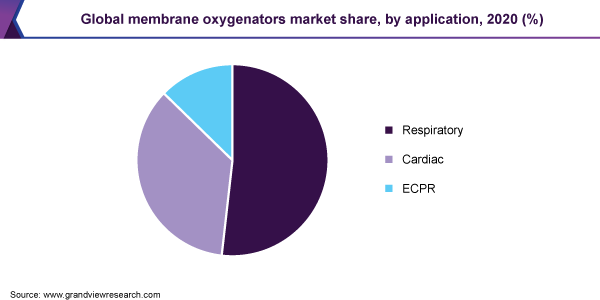 The ECPR segment is likely to expand at a lucrative CAGR of 1.9% from 2021 to 2028. Centrifugal pumps integrated with hollow fiber oxygenators are used in ECPR. Various risks of this type of application are intracranial hemorrhage, which may prove to be fatal; reperfusion injury that may lead to sepsis; multiple organ failure; and/or neurological injury. The other risks include vascular injury, which may cause bleeding complications and functional cannula failures, impeding segment growth. In addition, failure in maintaining constant blood flow may lead to suboptimal support or death. Around 350,000 people suffer cardiac arrest annually in the U.S., and out of them, almost 1% to 2% of pediatric admissions require cardiopulmonary resuscitation (CPR). Hence, increasing cases of cardiac arrest are anticipated to foster segment growth.

North America dominated the market and accounted for the largest revenue share of 40.4% in 2020. The market is expected to continue its dominance over the forecast period. Regionally, the market is segmented into North America, Latin America, Europe, Asia Pacific, and Middle East and Africa. The availability of well-developed primary, secondary, and tertiary care hospitals is supporting market growth in the region. Moreover, the presence of a well-developed reimbursement network, favorable government funding, and increasing awareness regarding membrane oxygenator machines are boosting its adoption in hospitals. Furthermore, technological advancements in membrane oxygenators are supporting market growth.

In Asia Pacific, the market is projected to exhibit the fastest CAGR of 2.1% over the forecast period. The growing prevalence of chronic diseases such as cardiopulmonary diseases due to unhealthy eating habits, excess tobacco consumption, and rising awareness about membrane oxygenators have led to a rise in its adoption rate in hospitals. Moreover, various government initiatives being undertaken and the success rate of ECMO systems during cardiothoracic surgeries are expected to boost the market growth. A large population with low per capita income in the Asia Pacific led to high demand for affordable treatment options. Multinational companies are planning to invest in developing countries such as China. This is further expected to boost the market over the forecast period.

Product launches, strategic acquisitions, and innovations are major strategies adopted by the market players to retain their market share. Some of the prominent players in the membrane oxygenators market include:

This report forecasts revenue growth at global, regional, and country levels and provides an analysis of the latest industry trends in each of the sub-segments from 2016 to 2028. For the purpose of this study, Grand View Research has segmented the global membrane oxygenators market report based on type, application, age group, and region:

b. The hollow fiber membrane oxygenators segment dominated the market and accounted for the largest revenue share of 63.4% in 2020.

Who are the key players in the membrane oxygenators market?

What are the factors driving the membrane oxygenators market?

b. Key factors that are driving the market growth include the increasing prevalence of and respiratory and cardiovascular diseases, the growing number of extracorporeal membrane oxygenator centers, rising adoption of membrane oxygenators as a bridge to lung transplantation.

How big is the membrane oxygenators market?

What is the membrane oxygenators market growth?

b. The adult segment dominated the membrane oxygenators market and accounted for the largest revenue share of 56.2% in 2020.

b. The respiratory segment dominated the membrane oxygenators market and accounted for the largest revenue share of 51.8% in 2020.

b. North America dominated the membrane oxygenators market and accounted for the largest revenue share of 40.4% in 2020.