The global men’s wear market size was valued at USD 483.0 billion in 2018 and is anticipated to grow at a CAGR of 6.3% over the forecast period. The growth of the market can be attributed to increasing fashion consciousness among millennial men. The designers have enhanced their focus on the masculine aspect of society owing to its potential for bearing higher prices.

A boosted exposure to the internet and e-commerce has improved the fashion consciousness and availability of high-end brands and rare products. Over the past few years, the companies have been targeting men’s wear as a result of growing purchasing power in emerging economies including China and India. Along with brands targeting men’s wear including Ralph Lauren, Burberry, and Armani, recognized designers also view men’s wear as a market with immense potential. 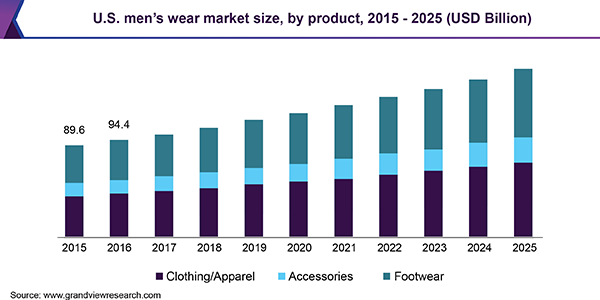 Tom Fords, Michael Kors, and Sean Combs are a few brands that are focused on the men’s wear segment. The styles and trends in the market have been constant for a while and have not undergone many changes and a lot can be explored. Fashion consciousness among men is increasing owing to the omnichannel route for marketing fashion brands.

Fashion shows across the globe including Paris, New York, London, Los Angeles, Rome, Milan, Barcelona, and Berlin have made sure to garnish men’s fashion with apt attention and publicity. Furthermore, fashion magazines such as ZQ, Men’s Vogue, Fantastic Man, and Nylon Guys have entered the picture and are contributing to the growth of men’s fashion and clothing.

According to an article published by Forbes in January 2019, “The Rise of The New Male Power Shopper,” it was found that men have been exhibiting new interest in shopping and have been even leaving behind female shoppers both online and offline. The millennials have been out casting every single stereotype that has prevailed in a while. Among these, both utilitarian and hedonic kind of shoppers make a good percentage of the population. E-commerce has played a vital role in creating this trend

Further, with increasing purchasing power of men from across the globe is positively affecting the situation. Owing to these factors most companies have started considering men as important target audience while manufacturing and marketing the products. Brands including Untuckit, Lululemon, Gap, and Bonobos have been realizing this potential of male shoppers and creating assortment of merchandise.

Fashion and dressing styles are hugely influenced by the appearance of the celebrities in movies, television, news, magazines, posters, and talk shows. Celebrities influence fashion by wearing whatever is in style currently but they also create trends. A major influence of fashion can be seen through their looks sported at airports, red carpet events, and premieres. This has been continuously setting up new fashion trends regularly.

Social media has grown and has now become a primary place for brands and celebrities to sport a new trend. Facebook, Instagram, Pinterest, YouTube, Twitter, and Snapchat having been playing an influential role in this agenda. All the aforementioned factors together are influencing the adoption of the trendiest apparels, accessories, and footwear among men.

According to OECD the global market of counterfeit good is worth over USD 450 billion. Counterfeit goods are among the biggest threats to the global apparel, accessory, and footwear industry. It reduces sales significantly along with diluting brand reputations. Numerous brands are adversely affected by the counterfeit industry. The online market supports some of the largest counterfeiters, who with their gigantic supply chain, are creating a major destruction.

Furthermore, the apparel, accessories and footwear counterfeiting problem are colossal. The loss caused by the counterfeit alone costs over USD 27.7 billion of revenue annually from counterfeit goods, according to official EU statistics. According to OECD, the global import of counterfeit and pirated goods is worth nearly half a trillion dollars a year, with the U.S., Italian and French brands facing the hardest hit.

Lower wear includes trousers, shorts, jeans, pants, tights, three-fourths, and cargos. Growing application of sports apparel among adults as a result of increasing health awareness among the working-class population is expected to have a positive impact on the men’s wear market growth. Furthermore, the growing importance of advanced apparel fortified with polymer composite materials including Spandex is one of the prominent trends in the market.

The accessories segment is expected to witness the fastest growth over the forecast period. This growth is attributed to the growing demand for luxury and high-end products among millennials and high net worth individuals. The market for expensive bags, belts, purses, cufflinks, and watches has bounced from economic uncertainties and geopolitical crises. Men are more than ready to pay for quality and brand, thus creating an upthrust in the market.

Offline distribution channels accounted for the largest share of 83.3% in 2018 owing to exposure and accessibility to the largest number of shoppers. A certain section of the society, mostly generation X, is not so comfortable buying clothes online. In addition, season clearance sales and instant availability are able to lure the customers toward this distribution channel. 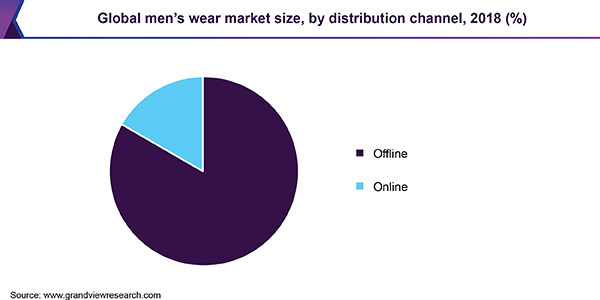 Online distribution channel is anticipated to witness significant growth in the coming years on account of the availability of the newest trends, rarest brands, and most in-demand apparel vogues at the most convenient price, along with the biggest discounts. In addition, most of these online shopping spaces have a collaboration with various other banks, which offer different payment modes and extra discounts when payments are made using a specific medium. Due to this, banks and other payment channels have been promoting themselves via these e-commerce websites, thereby leading to extra marketing and enhancing the overall sales.

North America held the largest market share in 2018 owing to higher purchasing power parity in the region as compared to others. Furthermore, the U.S. has an immense number of brands actively functioning in the market, which includes Ralph Lauren, Calvin Klein, Tommy Hilfiger, and Hollister. Thus, the global market has deep roots in the region and has a huge influence across the globe.

Men’s fashion in apparels, footwear, and accessories witnessed a high growth rate over the last few years owing to increasing sports and outdoor activities by the men in the U.S. According to a report published in 2017, ‘Outdoor Participation Report’ by the Outdoor Industry Association, in 2016 approximately 48.8% which is 144.4 million of the U.S. population participated in an outdoor activity for minimum once in the year, in which 54% was the male population. These trends are anticipated to foresee a high men’s wear market growth over the forecast period.

Asia Pacific is expected to expand at a CAGR of 6.6% from 2019 to 2025. This scenario is attributed to the growing establishment of offline and online players in the women wear market. Furthermore, increasing the ability to pay for its requirements is adding to the growth of the market. The Chinese and Korean manufacturers are manufacturing copies of expensive brands and making them available to people, which has been driving the market.

The China men’s wear market was valued at USD 53.11 billion in 2018 and is estimated to grow with a CAGR of over 6% during the forecast period. China having the largest population in the world is being targeted by apparel and footwear manufacturers. Large number of domestic manufacturers have brought international quality products at cheaper prices. Therefore, the Chinese market is fragmented in nature with high competition rivalry.

Major manufacturers are collaborating with the e-commerce and other trading companies to expand their distribution channel across the country. For instance, in February 2019, Xu Zhi, a London based luxury fashion label collaborated with JD.com, a Chinese e-commerce company to expand into men’s wear market. These market trends are anticipated to boost the demand for the men’s wear over the forecast period.

Some of the key players operating in the global market include Adidas Group; Calvin Klein; Gianni Versace S.r.l.; Guccio Gucci S.p.A.; Raymond Group; HUGO BOSS; LACOSTE; LEVI STRAUSS & CO.; Nike, Inc.; RALPH LAUREN MEDIA LLC; and Tommy Hilfiger, LLC. The omnichannel marketing by the active players has been making a positive impact on the market growth. New fashion trends for common men such as ‘smart casuals’ and ‘formals’ are the new trends among the common mass.

An endeavor towards achieving this goal has made sure that these active participants leave no stone unturned. Celebrity endorsements, specific characters from movies, reality shows, soaps, and series are often shown a certain pattern of dressing, leaving a strong impression on the viewers. To complement this, the celebrities can be seen endorsing looks specific to venues such as airport look, gym look, and vacation look.

This report forecasts revenue growth at the global, regional, and country levels and provides an analysis on the latest industry trends and opportunities in each of the sub-segments from 2015 to 2025. For the purpose of this study, Grand View Research has segmented the global men’s wear market report on the basis of product, distribution channel, and region: